The document Doc: Pseudo First order reaction Class 12 Notes | EduRev is a part of the Class 12 Course Chemistry Class 12.
All you need of Class 12 at this link: Class 12

The order of a reaction is sometimes altered by conditions. Consider a chemical reaction between two substances when one reactant is present in large excess. During the hydrolysis of 0.01 mol of ethyl acetate with 10 mol of water, amounts of the various constituents at the beginning (t = 0) and completion (t) of the reaction are given as under.

(In both the reactions, H  ion acts as a catalyst) For the non-equilibrium process, A + B → Products, the rate is first order w.r.t A and second order w.r.t. B. If 1.0 mole each of A and B are introduced into a 1 litre vessel and the initial rate were 1.0 x 10-2 mol/litre-sec, calculate the rate when half of the reactants have been used.

Analysis of some important first-order reactions

The rate of this first order reaction is measured by titrating a fixed volume of H2O2 (undecomposed) against a standard solution of KMnO4. Here KMnO4 acts as oxidising agent and H2O2 as reducing agent. The volumes of KMnO4 used for H2O2 after regular intervals of time are as follows.

Volume of KMnO4 at t = 0 corresponds to volume of H2O2 initially present.

Now using the above expression, if we calculate the values of k for different time intervals t1, t2, ........... (for actual numerical data), the values of k should be same if the reaction follows first order kinetics.

The rate of both the reaction is studied (measured) in similar manner. The volume of nitrogen (N2) is collected after a regular interval of time as follows

The reaction rate is measured by titrating the acid (CH3COOH) produced against a standard alkali solution. Note that when a test sample is prepared from the reacting mixture, there are two acids : one is mineral acid H  (HCl or any other) and second is CH3COOH produced. So volume of alkali used gives titration value for both acids. The data is collected in the following manner.

At t = 0, V0 is the volume NaOH used to neutralise the mineral acid present (H ) being used as catalyst.

At t = ∞ (i.e., at the end of hydrolysis), V∞, is the volume of NaOH used to neutralise whole of CH3COOH plus vol. of HCl present At t = ∞, volume of CH3COOH corresponds to volume of ester taken initially

The rate is measured by measuring the change in the angle of rotation (optical activity) by a polarimeter. Sucrose is dextro-rotatory, glucose is dextro-rotatory and fructose is leavo-rotatory. The change produced in rotatory power in time t gives a measure of x, the quantity of sucrose decomposed in that time. The total change in the rotatory power produced at the end of the reaction gives the measure of A0, the initial concentration of sucrose.

If r0, r1 and r∞ represent rotations at the start of reaction, after time t and at the end of reaction respectively,

After time t, let Pt be the total pressure, then

On similar pattern, please try to write the expression for Ist order rate law for following first-order reactions. (in terms of P0 and Pt)

Calculate the concentration ratio of C to A, if an experiment is allowed to start with only A for one hour.

Time when [B] is maximum 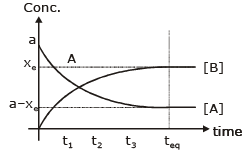 By substituting the value from equation (I)

The rate equation reduces to

Ineffective collisions are the collisions between the molecules which does not posses the threshold energy. These can not result in a chemical reaction.

Now most of the times, the molecules of reactants do not possess the threshold energy. So in order to make effective collisions (i.e., to bring about the chemical reaction), an additional energy is needed to be absorbed by the reactant molecules. This additional energy which is absorbed by the molecules so that they achieve the threshold energy is called as energy of activation or simply activation energy. It is represented as Ea.

A reaction which needs higher activation energy is slow at a given temperature.

is faster at ordinary temperature whereas the following reaction :

CO(g) +  → CO2(g) is slower at the same temperature as the value of Ea for the second reaction is much higher.

(a) Catalyst : The rate of reaction increased by addition of catalyst, because catalyst lowers, the activation energy and increased the rate of reaction. A catalyst is a substance which increases the rate of a reaction without itself undergoing any permanent chemical change. For example, MnO2 catalyses the following reaction so as to increase its rate considerably.

The word catalyst should not be used when the added substance reduces the rate of reaction. The substance is then called inhibitor. The action of the catalyst can be explained by intermediate complex theory. According to this theory, a catalyst participates in a chemical reaction by forming temporary bonds with the reactants resulting in an intermediate complex. This has a transitory existence and decomposes to yield products and the catalyst.

It is believed that the catalyst provides an alternate pathway or reaction mechanism by reducing the activation energy between reactants and products and hence lowering the potential energy barrier as shown in Fig. It is clear from Arrhenius equation that lower the value of activation energy faster will be the rate of a reaction. A small amount of the catalyst can catalyse a large amount of reactants. A catalyst does not alter Gibbs energy, DG of a reaction. It catalyses the spontaneous reactions but does not catalyse non-spontaneous reactions. It is also found that a catalyst does not change the equilibrium constant of a reaction rather, it helps in attaining the equilibrium faster, that is, it catalyses the forward as well as the backward reactions to the same extent so that the equilibrium state remains same but is reached earlier.

The ratio of rate constants with 10o difference in their temperature is called temperature coefficient.

With increase in concentration of reactants the rate of the reaction increases because number of, collision (effective collisions) increases.

As covalent reactants involving breaking of bond then formation of bond where as ionic reaction involve in single step.

(f) Radiation : Some reactions exposes to sunlight also increases the rate of reaction.