The document Raoult's Law Class 12 Notes | EduRev is a part of the Class 12 Course Chemistry Class 12.
All you need of Class 12 at this link: Class 12

What is Raoult’s Law?

A solvent’s partial vapour pressure in a solution (or mixture) is equal or identical to the vapour pressure of the pure solvent multiplied by its mole fraction in the solution.

Psolution = vapour pressure of the solution

Χsolvent  = mole fraction of the solvent Let's understand this by looking at the example below:

Where, PA and PB are the partial vapour pressures of A and B.

Solution being dilute (Condition for ideality) Raoult’s law can be applied. 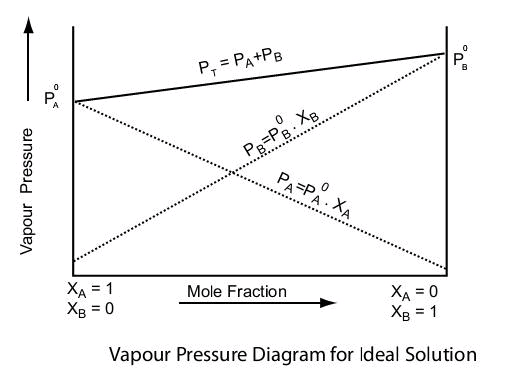 Total Pressure of a Solution will be:Vapour Composition

Raoult's Law as a special case of Henry's law

There are a few limitations to Raoult’s law:

Subtracting xA from both sides, we get

Now differentiating w.r.t. xA, we get

The value of xA at which yA − xA has a minimum value can be obtained by putting the above derivative equal to zero. Thus we have

Solving for xA, we get

Try yourself:If a mixture of A and B boils at a temperature lower than the boiling point of either of the components, what kind of deviation does the mixture show?
Explanation

Deviation is always exhibited by non-solutions. Non- ideal solutions do not obey Raoult’s behavior. This is because ΔHmix, ΔVmix ≠ 0. The cause for this is the intermolecular attractions. In this case, molecular attraction between A – B is weaker than that of A – A and B – B. Hence the easier it is to break the bonds and boil faster at a lower temperature than that of either of A and B.

View Solution
Try yourself:Considering a binary solution of components A and B obeys Raoult’s law, which of the following is true?
Explanation

Raoult’s law states that the partial pressure of each component in the solution varies directly with its mole fraction in the solution. It is formulated as ptotal = pA + (pB – pA)xB. From this, it is seen that when a graph is plotted, it gives a linear plot passing through the origin. Total vapour pressure can be expressed as a mole fraction of one component and that it varies linearly with the latter. However, total vapour solution may decrease or increase with the increase in the mole fraction of a component.

View Solution
Try yourself:“Total pressure of gas mixture is the sum of individual pressures”. Which law is reflected in this statement?
Explanation

Dalton’s of partial pressure states that for a non-reactive mixture of gases in a closed vessel, the total pressure of the mixture is the sum of pressures all individual gas components present. If gases A, B and C are present then, total pressure, Ptotal = PA + PB + PC.