The document Rate of a Reaction Class 12 Notes | EduRev is a part of the Class 12 Course Chemistry for JEE.
All you need of Class 12 at this link: Class 12

Rate of a Reaction 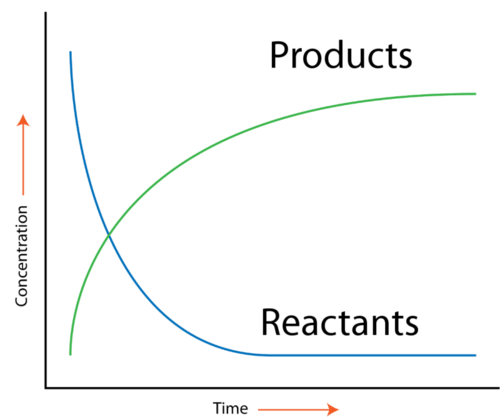 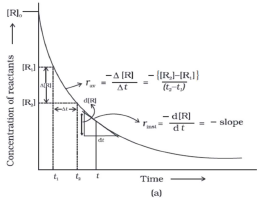 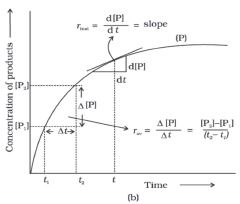 Rate of a reaction can, now, be defined in two ways:

Average Rate of reaction (rav) given by for the reaction R → P:

The average rate of the reaction between a time interval (tf - ti = Δt) can be determined from the above graph by locating the concentration of 'R' of 'P' on this graph at the time instants tf and ti as shown.

If [R]f and [R]i are the concentrations of the reactant 'A' at the time instants tf and ti then :

Instantaneous Rate of reaction (rinst.) can be calculated from rav

Units of rate of a reaction:

The rate of reaction can be expressed as follows :

What is Chemical Kinetics?

This branch of chemistry which deals with the study of rates of chemical reactions and the mechanism by which they occur. While studying reaction, one deals with:

(a) how fast (or slow) the reactants get converted into products

Chemical reaction kinetics deals with the rates of chemical processes. Any chemical process may be broken down into a sequence of one or more single-step processes known either as elementary processes, elementary reactions, or elementary steps.Elementary reactions usually involve either a single reactive collision between two molecules, which we refer to as a a bimolecular step, or dissociation/isomerization of a single reactant molecule, which we refer to as a unimolecular step.Very rarely, under conditions of extremely high pressure, a termolecular step may occur, which involves simultaneous collision of three reactant molecules. An important point to recognize is that many reactions that are written as a single reaction equation in actual fact consist of a series of elementary steps. This will become extremely important as we learn more about the theory of chemical reaction rates.

As a general rule, elementary processes involve a transition between two atomic or molecular states separated by a potential barrier. The potential barrier constitutes the activation energy of the process, and determines the rate at which it occurs. When the barrier is low, the thermal energy of the reactants will generally be high enough to surmount the barrier and move over to products, and the reaction will be fast. However, when the barrier is high, only a few reactants will have sufficient energy, and the reaction will be much slower. The presence of a potential barrier to reaction is also the source of the temperature dependence of reaction rates. The huge variety of chemical species, types of reaction, and the accompanying potential energy surfaces involved means that the timescale over which chemical reactions occur covers many orders of magnitude, from very slow reactions, such as iron rusting, to extremely fast reactions, such as the electron transfer processes involved in many biological systems or the combustion reactions occurring in flames.A study into the kinetics of a chemical reaction is usually carried out with one or both of two main goals in mind:

1. Analysis of the sequence of elementary steps giving rise to the overall reaction. i.e. the reaction mechanism.

2. Determination of the absolute rate of the reaction and/or its individual elementary steps.

Factors Affecting the Rate of Reaction

The various factions that can affect the rate of a chemical reaction are listed in this subsection.

Nature of the reaction

Effect of concentration on reaction rate

The rate of reaction also depends on the type of solvent. Properties of solvent and ionic strength highly affect the reaction rate.