Behaviour of prisms, lenses, and mirrors

Once we have the laws of reflection and refraction, the behaviour of prisms. lenses, and mirrors can be understood.  Here was just describe the behaviour of the wavefronts in these three cases (Fig)

Diffraction due to a Single Slit

When a parallel beam of light is incident normally on a single slit, the beam is diffracted from the slit and the diffraction pattern consists of a very intense central maximum having on either sides minima, and secondary maxima alternately. 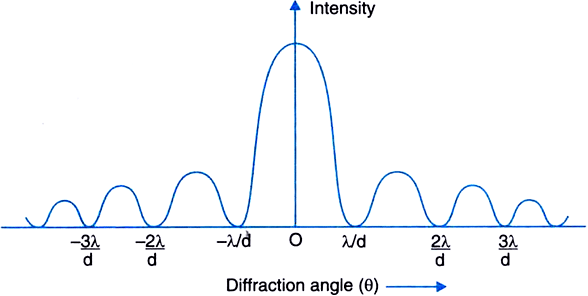 If a is width of slit and q the angle of diffraction, then the directions of maxima

The position of nth minima are given by

1. Telescope : If a is the aperture of telescope and l the wavelength, then resolving limit of telescope

2. Microscope : For microscope, q is the well resolved semi-angle of cone of light rays entering the telescope, then limit of resolution =

The phenomenon of asymmetry of vibrations about the direction of propagation of light is called polarisation.

1. Unpolarised Light : The light having vibrations of electric field vector in all possible directions perpendicular to the direction of wave propagation is called the oridinary (or unpolarised) light.

2. Plane Polarised Light : The light having vibrations of electric field vector in only one direction perpendicular to the direction of propagation of light is called plane polarised light.

This is called Brewter's law. It is given by n = tan ip

Under this condition the reflected refracted rays are mutually perpendicular i.e.,

where r is angle of refraction into the plane.

4. Malus Law : It states that if polarised light is passed through an analyser, the intensity of light transmitted µ cos2q , where q is angle between planes of transmission on polariser and analyser i.e.,

In incident light in unpolarised, then

since (cos2q)average for all directions 1/2.

5. Polaroid : Polaroid is a device to produce and detect plane polarized light.

Some Uses of Polaroids are :

(i) Sun glasses filled with polaroid sheets protect our eyes from glass.

(iii) Polaroids are used in three-dimensional picture i.e., in holography.

(i) If light beam shown no variabtion in intensity, then the given beam is umpolarised.

(ii) If light beam shows variation in intensity but the minimum intensity is non-zero, then the given beam is partially polarised.

(iii) If light beam shows variation in intensity and intensity becomes zero twice in a rotation then the given beam of light is plane polarised.

The document Reflection & Refraction of Waves - Notes | Study Physics Class 11 - NEET is a part of the NEET Course Physics Class 11.
All you need of NEET at this link: NEET
Attempt Now
Join Course