The document Rise of Magadha - Ancient India, IAS | EduRev Notes is a part of the UPSC Course History(Prelims) by UPSC Toppers.
All you need of UPSC at this link: UPSC

Between the sixth and the fourth centuries BCE, Magadha (in present day Bihar) became the most powerful Mahajanapada. The Haryankas: Magadha came into prominence under the leadership of Bimbisara (542-493 BC), who belonged to the Haryanka dynasty. 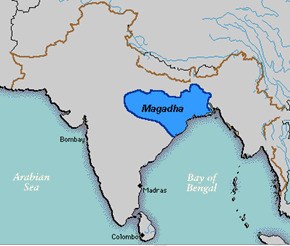 He strengthened his position by marriage alliances. He took three wives. His first wife was the daughter of the king of Kosala and the sister of Prasenajit. His second wife Chellana was a Lichchhavi Princess from Vaishali, and his third wife was the daughter of the chief of the Madra clan of Punjab. Marriage relations with the different princely families gave enormous diplomatic prestige and paved the way for the expansion of Magadha westward and northward.

The earliest capital of Magadha was at Rajgir, which was called Girivraja at that time. It was surrounded by five hills, the openings in which were closed by stone walls on all sides. This made Rajgir impregnable.

Bimbisar was succeeded by his son Ajatasatru (492-460 BC). Ajatasatru killed his father and seized the throne for himself. Throughout his reign, he pursued an aggressive policy of expansion.

Ajatasatru was succeeded by Udayin (460-444 BC), His reign is important because he built the fort upon the confluence of the Ganga and Son at Patna. This was done because Patna lay in the centre of the Magadhan kingdom.

The Sisunagas: Udayin was succeeded by the dynasty of Sisunagas, who temporarily shifted the capital to Vaishali. Their greatest achievement was the destruction of the power of the Avanti with its capital at Ujjain. This brought to an end the 100 years old rivalry between Magadha and Avanti.

The Nandas: The Sisunagas were succeeded by the Nandas, who proved to be the most powerful rulers of Magadha. So great was their power that Alexander, who invaded Punjab at that time, did not dare to move towards the east. The Nandas added to the Magadhan power by the conquering Kalinga from where they brought an image of the Jina as a victory trophy. All this took place in the reign of Mahapadma Nanda. He claimed to the ekarat, the sole sovereign who destroyed all the other ruling princes.

The Nandas were the first non-kshatriya rulers. The last Nanda ruler was defeated by Chandragupta Maurya who founded the Maurya Empire.

There were several trade routes and roads connecting different parts of India in all directions. One trade route was from Kosambi, through Gangetic plain, to Punjab and then Taxila joining the routes to Iran, Central Asia, European countries and several countries of Asia. Another route started from Rajagriha and, passing through Kosambi and Ujjaini, was connected with the port of Baroach from where the trade was carried on with western countries through sea-route. One important route passed through the entire Gangetic plain and reached the boundary of Burma and yet, another route connected northern plain with the sea-coast of south-east. These routes developed because of increased trade and, in turn, helped in enhancing internal as well as external trade.

The increased prosperity of the Indian affected their social structure as well. Towns became not only the centers of trade but centers of industries as well. Various goods were produced on a large scale to feed the foreign trade and that could be possible only in town or vice versa. By that time, Indian rulers had started minting good coins of different metals. It helped in the development of trade and growth of industries because coins proved to be a good medium of exchange and, thus, facilitated transactions. The growth of trade and industry formed rich trading and industrial communities which concentraded themselves in towns. We find existence of different guilds formed by traders and industrialism during this period. It created various organised and consciously awakened groups in towns which, finally, resulted in the formations of several sub-castes.