Q.3. Influence of friends can have Both positive and negative impact on the students.Write a letter to the editor of a national daily in 100-150 words discussing how we can make it more positive and productive. You are Arun/Aruna 24, Mall Road Chennai.OrThe pledge taken by school children of a cracker free Diwali did not meet with much success. Write an article in 100-150 words giving reasons for this. Suggest measures to curb the use of crackers to make it a crackerfree and green Diwali.You are Arun/Aruna.Ans.24, Mall Road Chennai .16th May, 20...The EditorThe Hindustan TimesChandigarhSirSub : Impact of friendshipKindly publish my views on the above mentioned topic in the columns of your newspaper.There is no doubt that friendship is a valuable relationship which exerts a great impact on one's mind.Friendship establishes a bond of companionship. Young boys and girls share their intimate feelings with their friends. They discuss with their friends even those things which they can't discuss with their parents. If the friends are class-fellows also, there is healthy competition among them. It boosts their happiness and reduces their stress. Happily, they help each other in studies.But friendship sometimes has a negative impact also. It results in wastage of time and development of vices like smoking and drinking.Friendship can be useful if friends use their time in a productive way. They can learn from one another and take up projects and social work. They can encourage each other by being supportive and not jealous.Yours faithfullyArunOrA Cracker-Free Green DiwaliThe pledge taken by the school children of a cracker free Diwali did not meet with much success. It failed to generate enough awareness. It appears that more motivation is required to prepare the students for this.It must be put in the minds of children that crackers have an adverse effect on the atmosphere. They pollute not only the air but also the soil and water. This pollution is very harmful, especially for children and the old people.In order to encourage the children to enjoy a cracker-free Diwali, awareness campaigns, highlighting the disastrous effects of pollution, should be started. Nature conservation should be encouraged. If at all they want to enjoy with crackers, they should prefer crackers with less sound and less emission. This campaign must be popularized through media. Only then will it be a success.Q.4. Develop a short story with the help of the given visual/starting line. Give a suitable title to your story. (150-200 words) 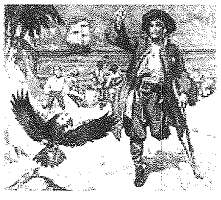 Orit was an amazing day, full of fun and frolic. We all stood aghast to see a strange flying object over our heads. We started guessing... (write in 150-200 words)Ans. The Adventures of Captain CookCaptain Cook and his crew landed on an island. After months of sailing, landing in the middle of nowhere, was such a welcome sight. Tom, the stowaway, 11 years old, was excited to see an island. He just couldn’t wait to climb trees and chase crabs on the beach. Monkeys, on trees, were quietly watching men, who had intruded into their island. Captain Cook’s parrot was in high spirits, “Captain, Captain!” Tommy’ Tommy”. “O shut up, you wretched bird!” scolded Captain Cook.Captain Cook ordered his crew to make a bonfire and pitch tents. He instructed that no one should venture out into the island alone. Tom was getting restless. He so wanted to explore this beautiful place! After all, months of being on the ship, and the tiresome sight of water everywhere, was so boring.The crew was busy pitching tents and getting food supplies from the boat and Tom found it an opportune time to sneak out of the camping site, unnoticed. He had just gone a few metres into the forest when he heard something. Someone was behind him. He turned around, saw nothing, and so decided to move ahead, when something hit him from behind! Scared, he ran. He heard a voice “Tommy scared! Tommy scared!” “Go back, go back” Oh! It is the Captain’s wretched bird. It wouldn’t leave him alone and the Captain would thrash him black and blue for disobeying his orders. He turned back and luckily for him, no one had noticed his absence.OrThe Weird BirdIt was an amazing day, full of fun and frolic. We all stood aghast to see a strange flying object over our heads. We started guessing, “What is it ?” “Could it be a weird bird ? Or could it be a UFO T Everyone on the playground stood agog! We had not even recovered from our surprise when once more it whizzed past over us and this time a little closer. Some one, with an oxygen mask, as it appeared to us, from where we were standing, waved to us. Oh, God! an alien! but a friendly one.A few schoolmates, especially girls, shrieked and ran inside. John, quite amused at their behaviour said, “Oh, come on! He is a friendly alien, he just waved to us.” Martin said, “John, they always behave like this.” He then shouted at the top of his voice,” Sorry Man! Welcome to our planet Earth!” The object stopped and blew a loud whistle, as if acknowledging hie greetings.John shouted in excitement, “It is a UFO, Guys. How exciting!” All, but me, were waving like mad. I noticed that the object had two front lights and two back lights and looked more like a car but with wings. I said “No, It is not a UFO.”Everyone looked at me. And now, a window rolled down and the head of a man, wearing a helmet, popped out. He yelled “Don’t be surprised, I am driving the first flying car of the century’. I clapped and with me the others - we were witnessing another scientific wonder of the twenty first century!Q.5. Rearrange the following words and phrases into meaningful sentences.The first one has been done as an example for you.Ex. knew/father/nobody/who/was/his Nobody knew who his father was.(a) died/mother/his birth/his/soon/after (b) brought up/ run by/Oliver/was/ in an orphanage / the workhouse (c) was/ there/ children/ always/ hungry/the (d) smallest/ was/ the orphanage / Oliver/ boy/ in/theAns. SENTENCE REORDERING(a) His mother died soon after his birth.(b) Oliver was brought up in an orphanage run by the workhouse.(c) The children there were always hungry.(d) Oliver was the smallest boy in the orphanage.Q.6. In the following passage one word has been omitted in each line. Write the missing word along with the word that comes before and the word that after it against the correct blank number.

Ans. (a) by the British (b) when they began(c) men had begun (d) worked their wayQ.7. Rearrange any four of the following groups of words/phrases to make meaningful sentences : (а) food is/the way/is/very important/cooked (b) different/there/are/ways/of cooking (c) over boiling/is cooking/water/food/steaming (d) steamed food/healthy/to/is considered/be (e) food/open fire/over/grilling/is cooking Ans. (а) The way food is cooked is very important.(b) There are different ways of cooking.(c) Steaming is cooking food over boiling water.(d) Steamed food is considered to be healthy.(e) Grilling is cooking food over fire.