The document Scheduled And Tribal Areas UPSC Notes | EduRev is a part of the UPSC Course Indian Polity for UPSC CSE.
All you need of UPSC at this link: UPSC

IntroductionArticle 244 in Part X of the Constitution has special provisions for administration of certain areas designated as “scheduled areas” and “Tribal areas”. The areas under the Fifth schedule deals with the administration and control of scheduled areas and scheduled tribes in all states except for the four states of Assam, Tripura, Meghalaya and Mizoram. While the Sixth schedule deals with the administration of the tribal areas of  Assam, Tripura, Meghalaya and Mizoram. Q. Why Scheduled areas are treated differently from the other areas in the country?

Ans. This is because they are inhabited by the ‘aboriginals’ who are socially and economically rather backwards, and needs affirmative actions to improve their conditions. Therefore the administrative machinery which works in the normal state doesn’t extend to the scheduled areas and central government has a greater responsibility in dealing with these areas.Provisions under schedule 5In 2016, 10 states of India had scheduled areas these include Andhra Pradesh, Telangana, Jharkhand, Chhattisgarh, Gujarat, Himachal Pradesh, Madhya Pradesh, Maharashtra, Orissa and Rajasthan. The various provisions of administration in the Fifth schedule area are as follows:-

Provisions under schedule 6The Constitution under this schedule contains special provisions for the administration of tribal areas in the four north-eastern states of Assam, Tripura, Meghalaya and Mizoram. The causes behind special provision for this state was – the tribes in these four states haven’t much assimilated in the life and ways of other people in these states. The tribe in these areas haven’t adopted the culture of the majority of the people among which they live. These tribes are a unique embodiment of culture, customs and civilization.The various features of administration in Sixth Schedule areas as enshrined in our constitution are:-

Note: Article 339 of the Indian Constitution mentions the Union government’s control over the Scheduled Areas administration and welfare of the Scheduled Tribes

Definition of Scheduled and Tribal AreasThe areas inhabited by the socially and educationally backward ‘Aboriginals’ are called Scheduled Areas.Facts about Scheduled Areas1. Part 10 of the Indian Constitution entails the provisions related to Scheduled and Tribal Areas with Articles 244 – 244 A.2. President is empowered to declare an area as Scheduled Area3. With the consultation of the governor of the state, the President can alter, add, diminish the boundary of a Scheduled Area4. Both the Centre and the State have their roles to play in the administration of the Scheduled areas. While the governor of the state has to report annually to the President over the management of such area, the Centre gives directions to the state regarding the administration of such areas.5. A tribal advisory council is a must for the states having scheduled areas

10. Criteria for the declaration of the Scheduled Area:

1. Sixth Schedule mentions the provisions related to the tribal areas of the four states – Assam, Meghalaya, Tripura and Mizoram

7. There is a separate regional council for each autonomous district8. The laws related to the following can be made by the regional and autonomous councils with the assent of the governor:

9. The territorial jurisdictions of autonomous and regional councils may or may not have village councils and courts of trials of suits to mend issues rising between tribes. Such cases can also be taken over by the High Court but only after being specified by the governor.10. The central and state acts do not apply to these autonomous and regional councils (unless modified and accepted.)11. The tribal areas in the four states are given below: 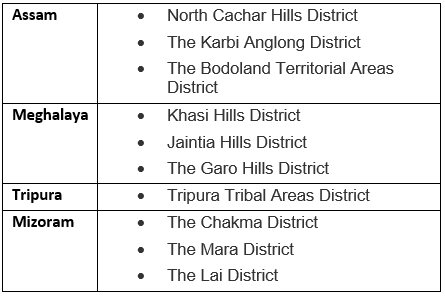