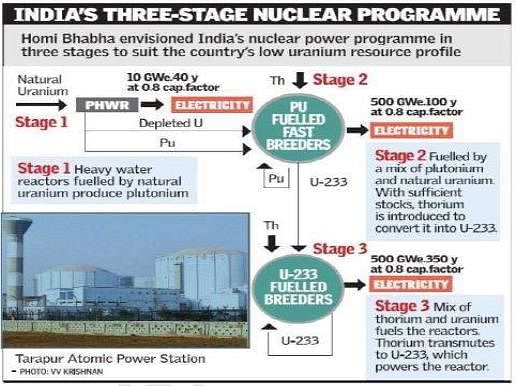 (i) India’s three-stage nuclear power programme was formulated by Homi Bhabha in the 1950s to secure the country’s long-term energy independence, through the use of uranium and thorium reserves found in the monazite sands of coastal regions of South India.(ii) The ultimate focus of the programme is on enabling the thorium reserves of India to be utilized in meeting the country’s energy requirements.(iii) Thorium is particularly attractive for India, as it has only around 1-2% of the global uranium reserves, but one of the largest shares of global thorium reserves.(iv) However, at present thorium is not economically viable because global uranium prices are much lower.

(i) In the first stage of the programme, natural uranium fuelled pressurized heavy water reactors (PHWR) produce electricity while generating plutonium-239 as by-product.[U-238 → Plutonium-239 + Heat](ii) Heavy water (deuterium oxide, D 2O) is used as moderator and coolant in PHWR.(iii) Almost the entire existing base of Indian nuclear power (4780 MW) is composed of first stage PHWRs, with the exception of the two Boiling Water Reactor (BWR) units.

(i) In the second stage, fast breeder reactors (FBRs) [moderators not required] would use plutonium-239, recovered by reprocessing spent fuel from the first stage, and natural uranium.(ii) In FBRs, plutonium-239 undergoes fission to produce energy, while the uranium-238 present in the fuel transmutes to additional plutonium-239.(iii) Thus, the Stage II FBRs are designed to “breed” more fuel than they consume.(iv) Once the inventory of plutonium-239 is built up thorium can be introduced as a blanket material in the reactor and transmuted to uranium-233 for use in the third stage.

(i) A Stage III reactor or an Advanced nuclear power system involves a self-sustaining series of thorium-232-uranium-233 fuelled reactors.(ii) This would be a thermal breeder reactor, which in principle can be refueled - after its initial fuel charge - using only naturally occurring thorium.(iii) As there is a long delay before direct thorium utilisation in the three-stage programme, the country is now looking at reactor designs that allow more direct use of thorium in parallel with the sequential three-stage programme. Three options under consideration are the Accelerator Driven Systems (ADS), Advanced Heavy Water Reactor (AHWR) and Compact High Temperature Reactor

(i) The Prototype Fast Breeder Reactor (PFBR) is a 500 MWe fast breeder nuclear reactor presently being constructed at the Madras Atomic Power Station in Kalpakkam, India.(ii) The Kalpakkam PFBR is using uranium-238 not thorium, to breed new fissile material, in a sodium-cooled fast reactor design.(iii) The fact that PFBR will be cooled by liquid sodium creates additional safety requirements to isolate the coolant from the environment, since sodium explodes if it comes into contact with water and burns when in contact with air.

What Hinders Deployment of Thorium-Fuelled Reactors in India?

(i) After decades of operating pressurized heavy-water reactors (PHWR), India is finally ready to start the second stage.(ii) A 500 MW Prototype Fast Breeder Reactor (PFBR) at Kalpakkam is set to achieve criticality any day now and four more fast breeder reactors have been sanctioned, two at the same site and two elsewhere.(iii) However, experts estimate that it would take India many more FBRs and at least another four decades before it has built up a sufficient fissile material inventory to launch the third stage.

(i) The legal rubric for safeguarded sale of plutonium and safety procedures for moving radioactive spent fuel and plutonium already exists but it is not too complicated as in case Uranium.(ii) The obvious solution to India’s shortage of fissile material is to procure it from the international market.(iii) Japan and the U.K. who are looking to reduce their stockpile of plutonium will certainly be happy to sell it to India.

DAE's own Research & Development wings include:

(i) Nuclear Power Corporation of India Limited (NPCIL) is a Public Sector Enterprise under the administrative control of the Department of Atomic Energy (DAE),Government of India.(ii) The Nuclear Power Corporation of India Ltd (NPCIL) is responsible for design, construction, commissioning and operation of thermal nuclear power plants.(iii) The DAE is thus responsible both for nuclear safety (through the AERB), as well as the operation of nuclear power plants (through NPCIL).

(i) At all nuclear power stations, state of the art safety measures are provided based on principles of redundancy (more numbers than required) and diversity (operating on different principles).(ii) These include fail safe shutdown system to safely shutdown the reactor, combination of active and passive (systems working on natural phenomena and not needing motive power or operator action) cooling systems to remove the heat from the core at all times and a robust containment to prevent release of radioactivity in all situations.(iii) In addition, all nuclear power plants are designed to withstand extreme natural events like earthquakes, floods, tsunami, etc.

Use of Nuclear Energy

1. Electricity Generation:- The total electricity generation from Nuclear Power Plants during the last three years was 115292 Million Units.2. Agriculture:- Using radiation induced mutagenesis technology, DAE has developed 42 varieties in oilseeds, pulses, rice and jute, which have been released and notified for commercial cultivation across the country. Currently, 15 irradiation plants are functional in the country carrying out radiation processing of agricultural/food products for shelf life extension.3. Medicine and Health:- Some of the Radiopharmaceuticals manufactured and supplied are:-(a) 99mTc-Technetium based radiopharmaceuticals: For diagnosing diseases related to all the important organs of the body comprising cerebral, myocardial, renal, liver, lung, etc. and for cancer detection.(b) 18F-Fluorine based diagnostic radiopharmaceuticals: PET based products for diagnosis of cancer, cardiac and neuro diseases.(c) 131I-Iodine based products for diagnosis and therapy of thyroid and related cancers.(d)  32P-Phosphorus, 153Sm-Samarium and 177Lu-Lutetium based Therapeutic radiopharmaceuticals for relieving the cancer borne pain and cancer therapy.

A national nuclear doctrine represents, the collective set of beliefs or principles held by the nation with regard to the utility of its nuclear weapons.

(a) Building and maintaining a credible minimum deterrence.(b) A "No First Use” posture; nuclear weapons to be used only "in retaliation against a nuclear attack on Indian territory or on Indian forces anywhere".(c) Nuclear retaliation to a first strike will be "massive" and designed to inflict "unacceptable damage".(d) Nuclear retaliatory attacks to be authorized only by civilian political leadership through the Nuclear Command Authority.(e) Non-use of nuclear weapons against non-nuclear weapon states.(f) Continuance of strict controls on export of nuclear and missile related materials and technologies, participation in FMCT negotiations, continued moratorium on testing.(g) India to retain the option of retaliating with nuclear weapons in the event of a major attack against it with biological or chemical weapons.(h) Continued commitment to goal of nuclear weapon free world, through global, verifiable and non-discriminatory disarmament.

1. Limited Ban Treaty: US, UK and USSR in 1963, signed this treaty. It allows nuclear tests only underground thus, prohibits the nuclear experiments on ground, underwater and in outer space. India has also ratified the treaty.2. Treaty on Outer Space: Signed in 1967, it prohibits countries to test nuclear weapons in orbit or on celestial bodies like the moon.3. Nuclear Non-Proliferation Treaty (NPT): Signed in 1968, the treaty entered into force in 1970, now has 190 member states. It requires countries to give up any present or future plans to build nuclear weapons in return for access to peaceful uses of nuclear energy. India is one of the only five countries that either did not sign the NPT or signed but withdrew, thus becoming part of a list that includes Pakistan, Israel, North Korea, and South Sudan.4. Comprehensive Test Ban Treaty (CTBT) intends to ban all nuclear explosions - everywhere, by everyone. India has not yet signed the Treaty.5. Fissile Material Cut-off Treaty (FMCT) is a proposed international agreement that would prohibit the production of two main components of nuclear weapons: highly-enriched Uranium and Plutonium.6. Missile Technology Control Regime (MTCR)(i) It is an informal political understanding among states that seek to limit the proliferation of missiles and missile technology.(ii) India has become the 35th full member MTCR In July 2016.(iii) MTCR membership enables India to buy high-end missile technology, strengthen its export control regime and it supports India’s bid to become a member of Nuclear Supplier Group.7. Nuclear Suppliers Group (NSG)(i) Created in response to India’s first nuclear test ‘Smiling Buddha’ (Pokharan-I) in 1974.(ii) It’s a group of nuclear supplier countries that seek to contribute to the non-proliferation of nuclear weapons through the implementation of two sets of Guidelines for nuclear exports and nuclear-related exports.(iii) A non-NPT state cannot become a member of NSG which keeps India out of the group.8. Australia Group(i) It’s an informal group that keeps a control over exports of substances used in the making of chemical weapons.(ii) Australia Group admitted India as the 43rd member on 19 January 2018.(iii) The group membership will help India to raise its stature in the field of non-proliferation, and help in acquiring the critical technologies.It will also strengthen India’s bid to gain NSG membership.9. Wassenaar Agreement(i) Wassenaar Agreement is a group of countries which subscribe to arms export controls.(ii) It seeks to bring about security and stability, by fostering transparent practices in the process of sale and transfer of arms and materials and technologies that can be used to make nuclear weapons.(iii) With the exception of China, all the other permanent members of the U.N. Security Council are signatories of this arrangement.(iv) After joining the group India will be able to easily access dual use technologies and materials and military equipment that are prescribed for non-participating members.(v) In addition, India will also be able to sell its nuclear reactors and other materials and equipment indigenously produced without attracting adverse reactions.

The document Science & Technology: Nuclear Technology - Notes - UPSC is a part of UPSC category.
All you need of UPSC at this link: UPSC
Attempt Now