UNCERTAINTY IN MEASUREMENTMany a times in the study of chemistry, one has to deal with experimental data as well as theoretical calculations. There are meaningful ways to handle the numbers conveniently and present the data realistically with certainty to the extent possible.1. Scientific Notation2. Significant Figures3. Dimension Analysis

1. Scientific NotationScientific Notation is a way of expressing numbers that are too big or too small to be conveniently written in decimal form.In which any number can be represented in the form N × 10n(Where n is an exponent having positive or negative values and N can vary between 1 to 10). 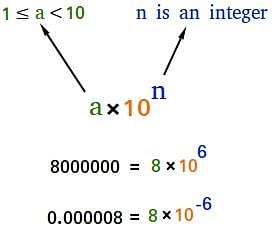 MULTIPLICATION AND DIVISION FOR EXPONENTIAL NUMBERSThese two operations follow the same rules which are there for exponential numbers, i.e. 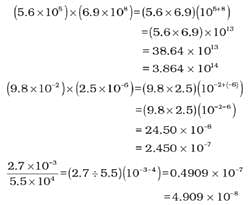 Precision refers to the closeness of two or more measurements to each other.Using the example above, if you weigh a given substance five times, and get 3.2 kg each time, then your measurement is very precise. Precision is independent of accuracy. You can be very precise but inaccurate, as described above. You can also be accurate but imprecise.Example: If on average, your measurements for a given substance are close to the known value, but the measurements are far from each other, then you have accuracy without precision.

(b) Another student repeats the experiment and obtains 1.94 g and 2.05 g as the results for two measurements.

(c) When a third student repeats these measurements and reports 2.01g and 1.99 g as the result.

Good accuracy means that average value of measurements is close to the actual value. Different measurements may not be close to each other (which is a condition for precision).

View Solution
Question for Scientific Notation, Precision & Accuracy
Try yourself:Two students X and Y report the weight of the same substance as 5.0g and 5.00g  respectively. Which of the following statements is correct ?
Explanation

5.00 is more accurate than 5.0 because the former has three significant figures while the latter has two.