The segment of a financial market of an economy wherefrom long-term capital is raised via instruments such as shares, debentures, mutual funds is known as the security market. 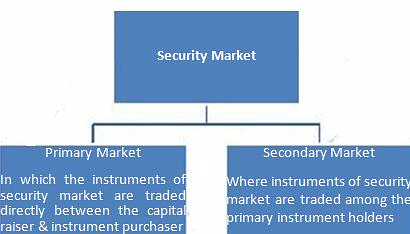 Securities and Exchange Board of India (SEBI)

•   In terms of this act, SEBI has been vested with regulatory powers over corporates in the issuance of capital, the transfer of securities and other related matters. Besides, SEBI has also been em powered to impose monetary penalties on capital market intermediaries and other participants for a range of violations.

•  SEBI is managed by six members – one chairman (nominated by Central Government), two memb ers (officers of central ministries), one memb er (from RBI) and remaining two memb ers nominated by Central Government. The  office  of  SEBI  is  situated  at  Mumbai    with    its   regional    offices  at Calcutta, Delhi and Che nnai. In 1988, the initial    capital    of    SEBI was    7.5 crore which was provided by it s promoters (IDBI, ICICI, IFCI).

•    This amount was investe d and with its interest amount day – to – day expenses of SEBI is met.

•    All statutory powers for re gulating Indian capital market are vested with SEBI itself.

Functions of SEBI in India:

•    To regulate the business of stock exchanges and other securities market.

•    To register and regulate collective investment plans of mutual funds.

•    To encourage self – regulatory organizations.

•    To supervise the working of various organizations trading in security market and also to ensure systematic dealings.

It serves the following functions:

Largest stock exchanges in the world by market capitalization in 2011:

The largest stock exchange in the world by both market capitalization and trade value. NYSE is the premier listing venue for the world’s leading large- and medium-sized companies. Featuring more than 8000 listed issues it includes 90% of the Dow Jones Industrial Average and 82% of the S&P 500 stock market indexes volume.

Located in London City, it is the oldest and fourth-largest stock exchange in the world. The Exchange was founded in 1801.

There are 24 stock exchanges in the country :

A brief of the National stock exchanges is as follow:

Biggest in India; account for almost 75%. Of the total stock traded in India.

There are 4 indices connected with BSE:

OTCEI (over the counter Exchange of India Ltd.)

Players in the market

Raising capital in the Primary Market

It includes all those matters which are connected with public money (government).

According to article 112 of the Indian constitution it is the “annual financial statement”. Article 113 discusses the procedure to be followed in the formation of budget. 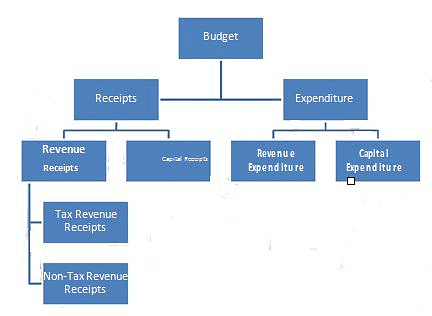 It includes all “Direct & Indirect Taxes

Done in the name of planning

These are asset creating or productive expenditures

All consumptive and non-productive expenditures

Data in the Budget

I. Actual data of the last year

III. Budgetary estimates for the next year

A kind of revised estimates which shows the latest situation

It is an interim data

It is an interim data

It is a part of fiscal deficit provided by the RBI

III. Fiscal deficit and revenue deficit may exceed targets only on the grounds of National security, calamity etc

IV. GoI not to borrow from RBI except by Ways & Means Advances (WMAs) V. RBI not to subscribe to the primary issue of GoI securities from       2006-07 VI. To ensure greater transparency in fiscal operations

VII. Each year GoI to lay 3 statements in the parliament

In 2006-07, in case of the Central government, proposed reduction in revenue and Fiscal deficit were put at 0.6 % and 0.5% respectively (higher than the FRBMA Rules), though the reduction suffered in 2005-06 due to higher devolution to states by centre on account of the recommendations of 12th Finance Commission.