Ques 1: In an unbiased p - n junction, holes diffuse from the p -region to n-region because(a) free electrons in the n-region attract them(b) they move across the junction by the potential difference(c) hole concentration in p -region is more as compared to n-region(d) All of the aboveSol: (c)Ques 2: When a forward bias is applied to a p-n junction. lt(a) raises the potential barrier(b) reduces the majority carrier current to zero(c) lowers the potential barrier(d) All o f the aboveSol: (c)

Ques 1: For transistor action, which of the following statements are correct?(a) Base, emitter and collector regions should have similar size and doping concentrations(b) The base region must be very thin and lightly doped(c) The emitter junction is forward biased and collector junction is reverse biased(d) Both the emitter junction as well as the collector junction are forward biasedAns: (b,c)Ques 2: For a transistor amplifier, the voltage gain(a) remains constant for all frequencies(b) is high at high and low frequencies and constant in the middle frequency range(c) is low at high and low frequencies and constant at mid frequencies(d) None of the aboveAns: (c)Ques 3: For a CE-transistor amplifier, the audio signal voltage across the collector resistance of 2 kΩ is 2 V. Suppose the current amplification factor of the transistor is 100. Find the input signal voltage and base current, if the base resistance is 1 kΩ.Ans: Vi = 0.01 V, ib = 10 μA

Ques 1: Make the output waveform Y of the NAND gate for the following inputs A and B. 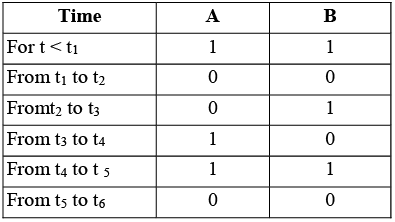 The document DC Pandey Solutions: Semiconductor - Notes | Study Physics Class 12 - NEET is a part of the NEET Course Physics Class 12.
All you need of NEET at this link: NEET
Attempt Now
Join Course