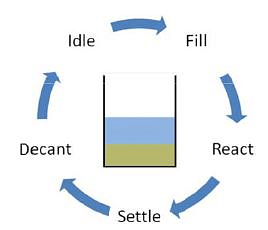 keeping on/off oxygen supply to the reactor. During the aerobic condition nitrification takes place. Aerated Fill can reduce the aeration time required in the react step.

React: Depending on the conditions applied: anaerobic, anoxic or aerobic reactions, substrate present in the waste water are consumed by the biomass.

Settle: After sufficient time of reaction, aeration and mixing is stopped and biomass is allowed to settle from the liquid resulting in clear supernatant.

Idle: This is the time between cycles which is used to prepare the SBR for next cycle. It is also used to adjust the cycle time between the SBR reactors. Sludge wasting is also performed during this phase.

HRT for the continuous system is defined as

Solid Retention Time (SRT): In biological treatment of wastewater, excess sludge is withdrawn from the reactor to control the sludge age (SRT). SRT determines the time (d) for which the biomass is retained in the reactor.

Nitrogen is the main source of eutrophication. In this regard, the complete oxidation of nitrogen during the treatment is favorable. Biological nitrogen is removed in two stages: aerobic nitrification and anoxic denitrification. In the nitrification process, ammonia (N-NH4+) is oxidized to nitrite (N-NO2-) (equation 3.4.8) by autotrophic bacteria called Nitroso-bacteria and generated nitrite is oxidized to nitrate (N-NO3-) (equation 3.4.9) by another group of autotrophic bacteria called Nitro-bacteria under aerobic conditions and using oxygen as the electron acceptor.

The autotrophic bacteria produce energy for their multiplication from the oxidation of inorganic nitrogen compounds, using inorganic carbon as their source of cellular carbon. During the nitrification, alkalinity of wastewater is used which reduces the pH of influent wastewater and required amount of alkalinity to carry out the reaction (equation 3.4.8, 3.4.9) in the CaCO3 form, can be calculated by the following equation;

Biological denitrification involves the biological oxidation of many organic substrates in wastewater treatment using nitrate or nitrite as the electron acceptor under the anoxic condition or limited dissolved oxygen (DO) concentrations and nitrate is degraded to nitric oxide, nitrous oxide, and nitrogen gas [4-6] by following any of the two different routes. One of these routes predominates depending on the dissolved oxygen concentration .

During the denitrification process, pH of influent wastewater increases because of increase of alkalinity. Both heterotrophic and autotrophic bacteria are capable of denitrification. Most of these heterotrophic bacteria are facultative aerobic organisms with the ability to use oxygen as well as nitrate or nitrite, and some can also carry out fermentation in the absence of nitrate or oxygen .