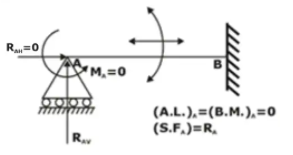 Note: The distance between two supports is known as “span”. The following are the important types of load acting on a beam: A beam is carrying a uniformly distributed load of w per unit length. Consider the equilibrium of the portion of the beam between sections 1-1 and 2-2. This portion is at a distance of x from left support and is of length dx.

The portion of the beam of length dx is in equilibrium. Hence resolving the forces acting on this part vertically, we get

The above equation shows that the rate of change of shear force is equal to the rate of loading.Taking the moments of the forces and couples about the section 2-2, we getNeglecting the higher powers of small quantities, we getF.dx = dM

F = dM / dxThe above equation shows that the rate of change of bending moment is equal to the shear force at the section.Some Examples: