Q.51 How do you account for the fact that unlike phenol, 2,4-dinitrophenol is soluble in aqueous sodium carbonate solution?

Answer: The presence of two electron withdrawing −NO2 groups in the ring at the ortho and para positions makes 2,4-dinitrophenol a stronger acid than phenol. It therefore, reacts with aqueous sodium cartonate to form corresponding sodium salt which is soluble. But phenol being a weaker acid does not react with aqueous sodium carbonate. For more details, consult section 12.16.Q.52 Alcohols react with halogen acids as well as phosphorus halides to form haloalkanes but phenols do not form haloarenes. Explain.

Answer: In phenols, the CO bond has a partial double bond character due to resonance. Therefore, it is not easily cleaved by the X− ion of halogen acids or phosphorus halides. But the bond is a pure single bond in alcohols and cleavage is therefore, possible. Thus, alcohols easily form haloalkanes while phenols do not form haloarenes.Q.53 The order of reactivity of alcohols in the esterification reaction is : primary > secondary > tertiary. Justify.

Answer: In the esterification reaction, OH bond of alcohol cleaves. The presence of alkyl group with +I effect makes the cleavage of the bond difficult and the alcohol becomes less reactive towards esterification. Greater the number of alkyl groups present, lesser will be the reactivity of alcohol. The relative order of reactivity is, therefore, justified. For more details, consult section 12.8.Q.54 Dehydration of alcohol to form an alkene is always carried out with concentrated H2SO4 and not with concentrated HCl or HNO3. Explain.

Concentrated HNO3 is a powerful oxidising agent. It will cause oxidation of alcohol to aldehyde and then to acid. Thus, out of the mineral acids listed, dehydration is carried by concentrated H2SO4. Even phosphoric acid can be used.Q.55 Phenol is acidic while cyclohexanol is neutral. Justify.

Q.56 Phenol has a smaller dipole moment than methanol. Discuss.Answer:

Phenyl group has −I (inductive effect) and it tends to decrease the electron density on the oxygen atom. As a result the polarity or dipole moment of OH bond is less than in methyl alcohol in which methyl group has +I effect.Q.57 o-nitrophenol is more acidic than o-methoxyphenol. Explain.

Answer: Nitro group is an electron withdrawing group. It tends to withdraw the electrons from the ring as well as from the oxygen atom of OH bond. This facilitates the release of proton. It is therefore, a stronger acid than o-methoxyphenolin which the methoxy group is an electron. For more details, consult section 12.16 (chemical properties of phenols).Q.58 The compound C4H10O is produced on reaction of an alkane with H2SO4/H2O which is not resolvable into optical isomers. Identify the compound.

Answer: The molecular formula of the compound and the reaction conditions suggests that the compound is an alcohol and not an ether. Since it is not resolvable, it is symmetrical and isotertiary butyl alcohol. The corresponding alkane is isobutane. The alcohol has been formed as follows :

Q.59 Which of the following is the most reactive towards attack by an electrophile?

Answer: An electrophile will always prefer to attack centres of high electron density in the ring. Both nitro (−NO2) and chloro (?Cl) groups are electron withdrawing groups. In benzyl alcohol (III), the OH group is not directly attached to the ring and is not in a position to activate it. Phenol (I) is the most reactive because phenolic group activates the ring towards electrophilic attack both at the ortho and para positions. For more details, consult section 12.16 (Chemical properties of phenols).Q.60 What is the major product of the hydration of following alkenes?(i)

Q.61 Why is cyclohexanol more soluble in water than hexan-1-ol?

Answer: In cyclohexanol, group R(−C6H11) is more compact than the group (−C6H13) in hexan-1-ol which is a straight alcohol. Due to smaller size, the cyclohexyl group is more exposed to hydrogen bonding with H2O molecules in as compared to the other alkyl group. Therefore, cyclohexanol is more soluble in water than hexan-1-ol.    Q.62 How will you distinguish between CH3(CH2)3OH and CH3CH=CHCH2OH by a chemical test?Answer:  Distinction can be made by bromine water. CH3CH=CHCH2OH (unsaturated alcohol) decolourises bromine water while CH3(CH2)3OH does not.Q.63 Why cannot anhydrous calcium chloride be used for drying ethyl alcohol?Answer:  Anhydrous calcium chloride cannot be used for drying ethyl alcohol because it forms an addition compound with the alcohol. 4C2H5OH+CaCl2(anhydrous)→CaCl2.4C2H5OHQ.64 What happens when propene is reacted with diborane and the product is hydrolysed with alkaline H2O2?Answer: Propan-1-ol is formed as a result of hydroboration oxidation reaction.

Q.65 What happens when propan-1-ol is treated with ethanoic acid in the presence of concentrated H2SO4?

Answer: Propylethanoate is formed which is an ester.

Q.66 What happens when phenol is reacted with excess of bromine water?Answer: A white precipitate 2, 4, 6-tribromophenol is formed.

Q.67 How will you distinguish between allyl alcohol and n-propyl alcohol?

Answer: Allyl alcohol will give white turbidity with Lucas reagent immediately, but n-propyl alcohol does not react at room temperature. Actually in allyl alcohol, the allyl carbocation left after the release of OH− ion is resonance stabilized which means that C?OH bond can be very easily cleaved by HCl. But the C?OH bond cleavage is not so easy in n-propyl alcohol because n-propyl carbocation is not resonance stabilised.CH2=CH−CH2−OH

Answer: (i) Ethanol gives iodoform test (yellow ppt.) but dimethylether does not. (ii) Pent-1-ene decolourises bromine water butpentan-1-ol does not. (iii) p-methylphenol gives characteristic violet colouration with FeCl3 but methoxybenzene does not.Q.70 Why is acid catalysed dehydration of tertiary butyl alcohol faster than that of n-butyl alcohol?

Answer: In phenols, the lone electron pairs on the oxygen atom are involved in conjugation with the pi electrons of the ring. Hence these are delocalised and are not easily available for protonation. On the other hand, in alcohols the electron pairs on the oxygen atom are not involved in any conjugation. These are localised and are readily available for protonation.Q.72 How will you distinguish between methanol and ethanol by colour test?

Answer: Ethanol gives a yellow precipitate of iodoform on warming with iodine and sodium carbonate while methanol fails to react.

Q.73 What is the function of anhydrous ZnCl2 in the Lucas test of alcohols?Answer:

Anhydrous ZnCl2 is a dehydrating agent and absorbs molecules of H2O formed in the reaction. This enables the reaction to proceed in the forward direction.Q.74 Arrange following in decreasing order of boiling points and account for the order. Pentan-1-ol (A)     2-Methylbutan-2-ol (B)   3-Methylbutan-2-ol (C)Answer:

Correct order: A > C > B The boiling points are linked to Van der Waals forces of attraction which depend upon the surface area. Smaller the molecular size, lesser is the surface area or Van der Waals forces and also the boiling point.Q.75  Predict in which of the following cases, the reaction with Lucas reagent will be immediate, slow or will not take place at all at room temperature? 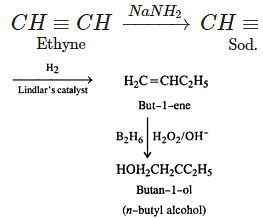 Answer: (a) Cyclohexanol (b) (1-Cyclopentenyl) methanol (c) 1-Methylcyclopentanol         (d) 3-Cyclohexen-l-olQ.80 Arrange the following compounds in the increasing order of the property indicated against each. Give reasons for your answer. (i) CH3CH2OH,CF3CH2OH,CCl3CH2OH-Acid strength (ii) 2-methyl-2-propanol, 1-butanol and 2-butanol?Reactivity towards sodium.

Answer: (i) Due to -I-effect of the halogen, the electron density in the O-H bond decreases. As a result of this electron-deficiency, the O -H bond weakens and thus facilitates the release of a proton as compared to CH3CH2OH. Further, since F has stronger -I- effect than Cl, therefore, CF3CH2OH is a stronger acid than CCl3CH2OH while CH3CH2OH is the weakest acid. Thus, acid-strength increases in the order : CH3CH2OH<CCl3CH2OH<CF3CH2OH.

Answer: Due to the strong electron-withdrawing nature of −NO2 groups, both 2, 4-dinitrophenol and 2, 4, 6-trinitrophenol are more acidic than carbonic acid and hence dissolve in aq. Na2CO3 solution to form the corresponding sodium salts with the evolution of CO2.Q.83 Alcohols react with halogen acids or phosphorus halides to form haloalkanes but phenols do not form halobenzenes. Explain.

Answer: The order of reactivity of alcohols towards Lucas reagent follows the sequence : 3∘>2∘>1∘. Thus, the correct sequence of reactivity is : 2-methyl-2-propanol(3∘) > 2-butanol (2∘) > 1- butanol (1∘)Q.85 How will you distinguish between 1-phenylethanol and 2- phenylethanol?

Q.86  Which is a stronger acid, phenol or cresol? Explain.

Answer: Cresol is methyl phenol. It has three positional isomers : o-cresol, m-cresol and p-cresol. Due to +I-effect of CH3 group, electron-density in the O−H bond increases. Therefore, it becomes difficult to break the O−H bond as compared to that in phenol and hence all cresols are less acidic than phenol or phenol is a stronger acid than cresols.

(Due to +I-effect of CH3 group, electron density in the O−H bond increases thereby making the cleavage of O−H bond difficult)Q.87.Name the reagents which are used in following conversions : (i) A primary alcohol to an aldehyde (ii) Butan-2-one to butan-2-ol (iii) Phenol to 2, 4, 6-tribromophenol.

Answer: Pyridinium chlorochromate (PCC) converts 1∘ alcohols to aldehydes without any danger of being oxidized further to carboxylic acids.

(ii) Butan-2-one can be reduced to butan-2-ol by a variety of reagents such as Ni/H2,Na, alcohol, NaBH4 or LiAlH4.

Q.88 Name the reagents and write the chemical equations for the preparation of the following compounds by Williamson synthesis. (i) Ethoxybenzene, (ii) 2-Methyl-2-methoxypropane

(ii) The reagents are sod. 2-methyl-2-propoxide and bromomethane.

Answer: Dehydration of 2, 3-dimethylbutan-2-ol occurs according to Saytzeff rule as a result of which more highly substituted alkene, i.e., 2, 3-dimethylbut-2-ene is formed as the major product.

Q.90 Why (CH3)3COH is less acidic than (CH3)3SiOH although carbon is more electronegative than Si?

Answer: Carbon does not have d-orbitals and hence does not form dπ-pπ bonds. In contrast, silicon has empty d-orbitals and hence it forms dπ -pπ bonds with oxygen. As a result, transference of electrons occurs fromO to Si. In other words, electron-density around O decreases. It, therefore, withdraws electrons of the O−H bond towards it. Consequently, O−H bond in (CH3)3SiOH breaks more easily than in (CH3)3COH and hence (CH3)3SiOH is more acidic than(CH3)3COH.