The document Short & Long Question Answers - Heat Class 7 Notes | EduRev is a part of the Class 7 Course Science Class 7.
All you need of Class 7 at this link: Class 7

Ans : Heat is a form of energy, entry or exit of which correspondingly increases or decreases internal energy of a body when no work is done on the body or by the body. It is measured in joule or calories.

Q2: Define temperature. What is its unit?

Ans :  A reliable measure of the hotness of an object is its temperature. Temperature is measured by a device called thermometer. Unit of temperature is degree Celsius (°C), Fahrenheit and Kelvin (SI unit).

Q3: What is the use of the maximum-minimum thermometer?

Ans :  Different types of thermometers are used for different purposes. The maximum and minimum temperatures of the previous day, reported in weather reports, are measured by a thermometer called the maximum-minimum thermometer. 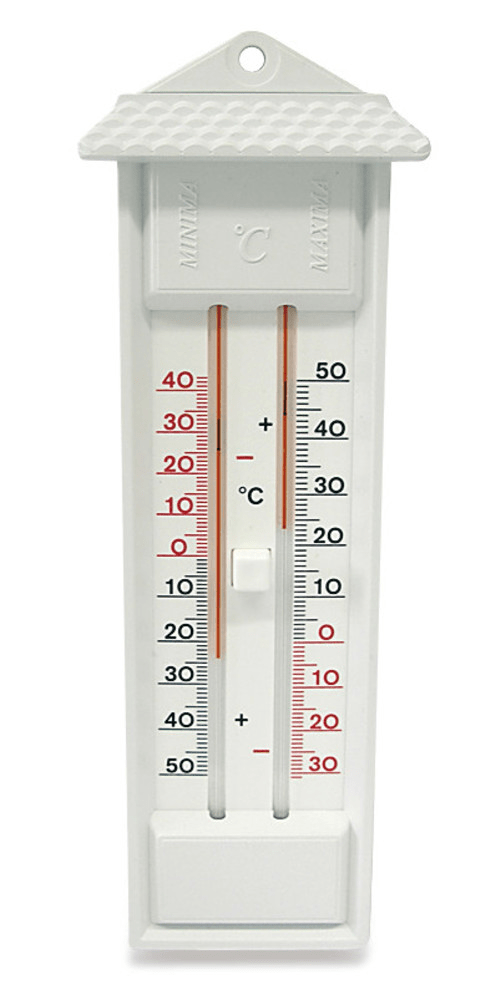 Q4: Why does the mercury not fall or rise in a clinical thermometer when taken out of the mouth?

Ans : Kink prevents mercury level from falling on its own.

Q5: Why clinical thermometer ranges from 35oC to 42oC.?

Q6: What is conduction?

Ans : Heat flows from a hotter object to a colder object. The process by which heat is transferred from the hotter end to the colder end of an object is known as conduction.

Q7: Why conduction is only possible in solids?

Q8: How does the heat from the sun reach us?

Ans : It cannot reach us by conduction or convection as there is no medium such as air in most part of the space between the earth and the sun. From the sun the heat comes to us by a different process known as radiation which does not require any medium for heat transfer.

Ans : The water is poor conductor of heat so do not heated by conduction. When water is heated, the water became lighter. Hot water rises up. The cold water from the sides moves down towards the source of heat. This water also gets hot and rises upward and water from the sides moves down. This process continues till the whole water gets heated. This mode of heat transfer is known as convection.

Q10: Differentiate between conductor and insulators?

Ans : At night, the water cools down more slowly than the land. So, the cool air from the land moves towards the sea. This is called the land breeze.

Q14: Why one thick blanket is less warm up than two thin blankets joined together?

Ans : There is a layer of air in between the blankets. Since air is bad conductor of heat prevent body heat to escape out, two thin blankets provides more heat than one thick blanket.

Q15: How Woollen clothes keep us warm in winter?

Ans : Woollen clothes keep us warm during winter. It is so because wool is a poor conductor of heat and it has air trapped in between the fibres.

Q16: What is the Relation between Celsius, Fahrenheit and Kelvin scales?

Ans : Since the range of temperature from ice-point to steam-point is equal in all the three scales, 100 centigrade degrees = (212 - 32) or 180 Fahrenheit degrees = (373 - 273) or 100 absolute degrees. We consider three thermometers in the above three scales are dipped simultaneously in a liquid of certain temperature. Let the temperatures recorded in the Celsius, Fahrenheit and Kelvin thermometers respectively be C, F and K. Now it can be proved that C / 5 = F- 32 / 9 = K- 273 /5.

Q18: State similarities between the laboratory thermometer and the clinical thermometer.

Q19: Discuss why wearing more layers of clothing during winter keeps us warmer than wearing just one thick piece of clothing.

Ans : In between the layers of cloths there is trapped air. As air is bad conductor of heat so the outside low temperature does not get transferred to body as well as prevent our body heat to escape outside. Hence more layers of cloths keep us warmer during cold winter.

Q20: In places of hot climate it is advised that the outer walls of houses be painted white. Explain.

Ans : In places of hot climate it is advised that the outer walls of houses be painted white because a light colour absorbs very less radiant heat and we feel comfortable inside such houses due to lower temperature inside house.

Q21: How heat and temperature of substance are related to each other.

Ans :  Specific heat is a fundamental property of matter. An equal mass of different materials absorb or give out different quantities of heat, even if they are heated or cooled through the same range of temperature.This is also called specific heat capacity (abbreviated as SHC) in S.I. system.

Q24: What you should choose in winter one thick blanket or two thin blankets joined together? And why?

Ans :  There is a layer of air in between the blankets. Since air is bad conductor of heat prevent body heat to escape out, two thin blankets provides more heat than one thick blanket.

Q25: What is thermal equilibrium?

Q26: Which property of liquids is used in making thermometer?

Ans : The property of thermal expansion of liquids is used in making thermometers. It states liquid expands on heating and contracts on cooling.

Ans : There are three temperature scales in use today, Fahrenheit, Celsius and Kelvin:

Until the 1970s the Fahrenheit temperature scale was in general common use in English-speaking countries; the Celsius, or centigrade, scale was employed in most other countries and for scientific purposes worldwide. Since that time, however, most English-speaking countries have officially adopted the Celsius scale. The conversion formula for a temperature that is expressed on the Celsius (C) scale to its Fahrenheit (F) representation is: F = 9/5C + 32. 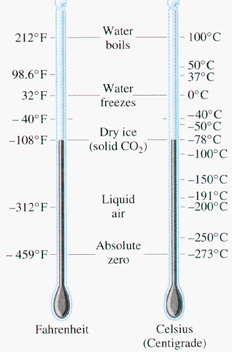 Celsius temperature scale also called centigrade temperature scale, is the scale based on 0 for the freezing point of water and 100 for the boiling point of water.  Invented in 1742 by the Swedish astronomer Anders Celsius, it is sometimes called the centigrade scale because of the 100-degree interval between the defined points. The following formula can be used to convert a temperature from its representation on the Fahrenheit ( F) scale to the Celsius (C) value: C = 5/9(F - 32). The Celsius scale is in general use wherever metric units have become accepted, and it is used in scientific work everywhere. 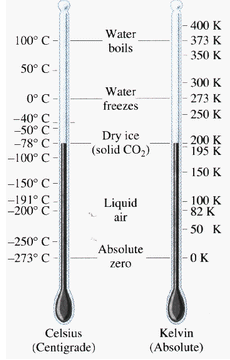 Kelvin temperature scale is the base unit of thermodynamic temperature measurement in the International System (SI) of measurement. It is defined as 1/ 273.16 of the triple point (equilibrium among the solid, liquid, and gaseous phases) of pure water. The kelvin (symbol K without the degree sign []) is also the fundamental unit of the Kelvin scale, an absolute temperature scale named for the British physicist William Thomson, Baron Kelvin. Such a scale has as its zero point absolute zero, the theoretical temperature at which the molecules of a substance have the lowest energy. Many physical laws and formulas can be expressed more simply when an absolute temperature scale is used; accordingly, the Kelvin scale has been adopted as the international standard for scientific temperature measurement. The Kelvin scale is related to the Celsius scale. The difference between the freezing and boiling points of water is 100 degrees in each, so that the kelvin has the same magnitude as the degree Celsius.

Q2: Explain laboratory and clinical thermometer along with their function, and uses.

2) Accuracy of Laboratory and Clinical Thermometer

As a laboratory thermometer is more complex, it yields more accurate results as compared to a clinical thermometer.

4) Application of Laboratory and Clinical Thermometer

Regarding mercury-filled devices, clinical thermometers have kinks to prevent the instant back flow of mercury. On the other hand, laboratory thermometers do not usually need to actively stop such back flow.

Due to its simplicity, almost anybody can be taught to use a clinical thermometer. On the contrary, the lab thermometer is mainly used by individuals in the science field.

7) Purpose of Laboratory and Clinical Thermometer

8) Mercury in Laboratory and Clinical Thermometer

10) Accessibility of Laboratory and Clinical Thermometer

Since there are more individuals who need clinical thermometers, these devices are more accessible as compared to laboratory thermometers.