Q.1. A piece of black electrode used in dry cell on strong heating in air gives a colourless gas which turns lime -water milky. What was the material of the electrode?Ans. The piece of black electrode used in the dry cell is made of graphite (which is an allotrope of carbon element). This is confirmed by the fact that the piece of electrode, on strong heating in air, gave a colourless gas carbon dioxide which turned lime- water milky. Thus, the material of the electrode is graphite.Q.2. Why does graphite conducts electricity, but not diamond?Ans. In case of diamond, each carbon atom of a single crystal is surrounded by four other carbon atoms by covalent bonds such that they form four corners of a regular tetrahedron. Because of four covalent bonds with each carbon atom there are no free electrons available. Due to the non-availability of free electrons within crystalline structure, diamond acts as a bad conductor of electricity.In case of graphite, every carbon atom in a single crystal is covalently bonded to three carbon atoms. As each carbon atom has four valence electrons one valence electron is left free for each carbon atom. These free electrons can be easily made to flow within the crystalline structure of graphite by applying electric potential. Thus, graphite is a good conductor of electricity.Q.3. Write three important uses of ethanol.Ans. 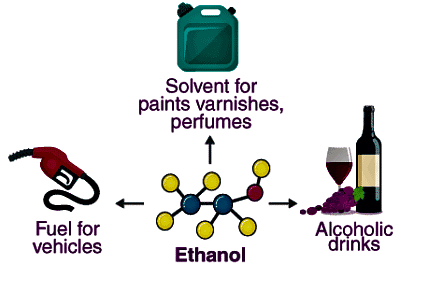 Uses of EthanolQ.4. State what you will observe when sugar crystals are heated strongly.Ans. The sugar crystal will initially melt. Gradually, they turn brown and start swelling up. They will give off large amount of steam. Finally black porous residue of carbon is left behind.Q.5. How are the molecules of aldehyde and Ketone structurally different?Ans. In aldehyde, the carbon atom of the carbonyl group is attached to one alkyl group (R) and one hydrogen atom but in ketone, the carbonyl group is attached to two alkyl groups. Aldehyde is a terminal functional group whereas ketone is a non terminal and exists in the middle of the carbon chainQ.6. What change has been made in the composition of detergents to make them biodegradable?Ans. Detergents made from long chain hydrocarbons having the minimum branching in their molecules are degraded more easily.Q.7. A hydrocarbon molecule contains 4 hydrogen atoms. Give its molecular formula, if it is an: (i) alkane (ii) alkene(iii) alkyne.Ans. (i) An alkane containing 4 hydrogen atoms in its molecule is methane, CH4.(ii) An alkene containing 4 hydrogen atoms in its molecule is ethene, C2H4(iii) An alkyne containing 4 hydrogen atoms in its molecule is propyne, C3H4.Q.8. Why common salt is added in soap making?Ans. Common salt is added to the mixture to make the soap come out of solution. Though most of the soap separates out on its own but some of it remains in solution. Common salt is added to precipitate out all the soap from the aqueous solution.Q.9. What is meant by denatured alcohol? What is the need to denature alcohol?Ans. The alcohol which is rendered unfit for drinking by mixing it with some poisonous substances, such as methanol, pyridine, copper sulphate, etc is known as denatured alcohol. Ethanol is an important industrial chemical. Therefore, it is subjected to very small excise duty. To prevent its misuse for drinking purposes, there is a need to denature alcohol.Q.10. What is meant by the term “functional group”?Ans A functional group in an organic compound is an atom or a group of atoms bonded together in a unique fashion, which is usually the site of chemical reactivity in an organic molecule.

The document Short & Long Answer Questions: Carbon & its compounds Notes | Study Science Class 10 - Class 10 is a part of the Class 10 Course Science Class 10.
All you need of Class 10 at this link: Class 10
Join Course