The document Short and Long Question Answers - On the Trail of Earliest People Class 6 Notes | EduRev is a part of the Class 6 Course Social Studies (SST) Class 6.
All you need of Class 6 at this link: Class 6

Ans : Mesolithic age is also known as middle stone age. This period of the human history witnessed the changes in the climatic conditions. The temperature increased and allowed the growth of plants. The number of animals also increased with the increase in the grasslands.

Ans : In this technique, the pebble from which, the tool was to be made was held in one hand. Another stone, which was used as a hammer was held in the other hand. The second stone was used to strike off flakes from the first, till the required shape was obtained.

Q3: What made early man to Start domesticating animals?

Ans : Due to change in climate conditions, there was an increase in the number of animals and the hunters started following them, which helped the early man to start domesticating animals.

Ans : The “Bhimbetka rock shelters” exhibit the earliest traces of human life in India. Its stone age rock paintings are approximately 9,000 years old. These rock paintings throw some light on the life and activities of the people who inhabited these shelters. 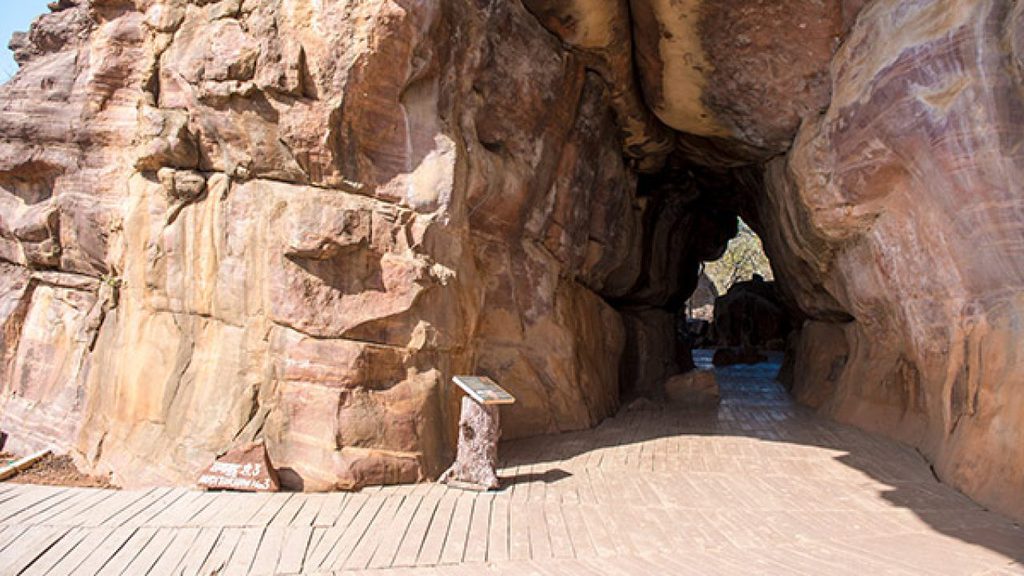 Ans : Microliths were the tiny or small stone tools. They were marked for their fine edge. They were used as scrappers, chiesel, etc.

Ans : When the hunters followed the animals for hunting, they might have learnt about their food habits and their breeding seasons. It is likely that this helped people to start thinking about herding & rearing these animals themselves.

Q7: How did the discovery of fire help the early man?

Fire could have been used for many purposes:

Q8: How were stone tools made?

Q9: What are sites? Where are they located?

Ans : Sites are places where the remains of past cultures (tools, pots, rock paintings, buildings etc.) are found. These spots could be the surface of the earth, under the earth, or sometimes even under water.

Q11: What are habitation sites? Why did people choose them? Give examples.

Ans : Habitation sites were places where people lived. These include caves and rock shelters. People chose these natural caves because they provided shelter from the rain, heat and wind. E.g. Bhimbetka (in present Madhya Pradesh) ,Chirand (in present Bihar).

Q12: Why did the communities of early man emerge on the banks of rivers?

Ans : Water is found in rivers, lakes and streams. While most of the rivers are perennial others are seasonal. People, plants and animals need water to survive. This is the main reason that communities of early man emerge near sources of water.

Q13: What is a ‘Palaeolithic period’?

Q14: How were the stone tools made?

Ans : Stone tools were probably made using two different techniques that is stone on stone and pressure flaking.

Q15: When did the grasslands develop?

Ans : Around 12,000 years ago due to relatively warm conditions there was a major change in the climate of the world. This led to the development of the grasslands.

Q16: How did the changing environment affect the life of the early people?

Ans : Changes in the environment affected the people in following ways: Change in the environment led to the development of grasslands. As a result, the number of animals that survived on grass, i.e., deer, antelope, goat, sheep and cattle increased. Those who hunted these animals now started following them. They learnt about their food habits and their breeding seasons. This must have led to the domestication of animals by these people. Fishing also became important. During this time wheat, barley and rice grew naturally in different parts of the subcontinent. Men, women and children probably collected these grains as food and learnt where they grew and when they ripened. This must have led to the start of agriculture.

Ans : The name ‘hunter-gatherers’ comes from the way in which the people in the early period got their food. Generally, they hunted wild animals, caught fish and birds, gathered fruits, roots, nuts, seeds, leaves, stalks and eggs. In the early days, gathering plant produce was an extremely important means of obtaining food.

Q18: What do cave paintings usually depict? What information do they give us?

Ans : Many cave and rock paintings were found in India. Some of the best examples are from Madhya Pradesh and southern Uttar Pradesh. Paintings were made in bright colours. These colours were made from rocks and naturally available minerals. The paintings depict various activities of early man and tell us about their methods of hunting, fishing, collecting honey, religious practices etc. These paintings were drawn with great accuracy and skill.

Ans : Stone tools found during the Mesolithic period are called Microliths. They were generally tiny in size. The Mesolithic man probably stuck these stones on to the handles of bones or wood to make tools such as saws and sickles. These tools were used for digging the ground and stitching clothes.

Q20: Mention the archaeological sources that tell us about man’s life in the early period.

Ans : Sources found like, tools, caves and rock paintings tell us about the eating habits of early man, material used by him during that time and the activities performed. Tools: The earliest tools were made of stone, bone and wood. They were used to cut meat and bone, scrape bark from trees for hunting, for stitching clothes etc. Caves: People lived in caves and rock shelters as they provided shelter from the rain, heat and wind. Rock paintings: The early man made paintings in the caves and rock shelters. These paintings were drawn with great accuracy and skill.

Q22: What are the important features of the paintings drawn on the rock shelters of Bhimbetka?

Ans : The rock shelters of Bhimbetka are decorated with picture writings, depicting the life and times of pre-historic cave dwellers. These paintings mirror the difficulties of the native man’s struggle with life as also his accomplishments. These paintings also show wild animals drawn with great accuracy. Religious symbols those were popular with these pre-historic artists also adorn the walls of these shelters. The paintings are often superimposed, which reveals that the surface was used by different people at different times.

Q23: Why was it difficult to hunt animals and gather plant produce in the early times?

The early man faced a lot of problems while hunting animals and gathering plant produce. Some of them are as follows:

Q24: Did division of labour exist during the prehistoric times?

The early man was a hunter and a gatherer. He also made stone tools and painted on cave walls. Till now it is not really known whether division of labour existed during this time. However, there are at least two presumptions:

Q1: Hunter-gatherers used stone tools. Explain what these tools were used for? Give reasons.

Q2: Why did hunter- gatherers move from place to place? Give at least four reasons.

The reasons behind the moving of hunters-gatheres are :