What are Significant Figures? 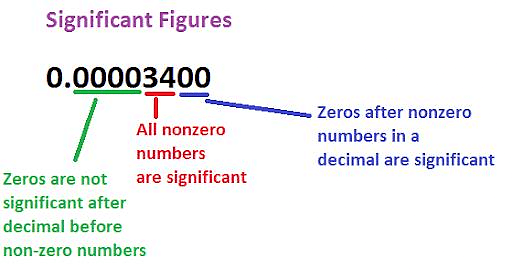 It is important to understand that the way a measurement is taken affects its accuracy. For example, you could measure the length of a leaf with a ruler that had markings every centimeter (cm). In this example, illustrated below, the leaf is longer than 3 cm and shorter than 4 cm, so you might estimate that the leaf is 3.5 cm long.

On the other hand, if you measured the same leaf with a ruler that had markings every millimeter (mm), as drawn below, you can see that the end of the leaf actually falls between the markings for 3.5 and 3.6 cm (or 35 and 36 mm). Because it’s closer to the 3.5 marking, you might estimate that the leaf is 3.52 cm (or 35.2 mm) long.

Using the second ruler, it’s possible to estimate that the leaf is 3.52 cm long, but it is not possible to measure that accurately with the first ruler. In this way, the number of digits in the measured value gives us an idea of the maximum accuracy of the measurement. These are called significant digits or significant figures.

Example. Order of magnitude of the following values can be determined as follows:

When doing calculations using significant figures, you will find it necessary to round your answer to the nearest significant digit. There are therefore a few rules of rounding that help retain as much accuracy as possible in the final answer.

AMBIGUOUS ZEROSSo what happens if your calculation or measurement ends in a zero? For example, what if you measured a branch that was 200 cm (not 199 or 201 cm) long? The zeros in a measured value of 200 cm in this case appear ambiguous, since it could suggest that there is only one significant digit.One way to reduce this ambiguity is to use significant figures with scientific notation.

The document Significant Figures Notes | Study Physics Class 11 - NEET is a part of the NEET Course Physics Class 11.
All you need of NEET at this link: NEET
Join Course