Social Reforms Movements During Colonial PeriodA reform movement attempts to improve conditions within an existing social system without changing the fundamental structure of the society itself. Reforms are often linked with belief systems, rituals and life styles of the concerned people. There are several examples of reform movements in India. The most well-known reform movement was the Bhakti (devotional) movement of medieval India. It was an allIndia movement which involved the lower caste people and the poor. It insisted on love of God as the most significant thing in religion. I t protested against ritualism and caste barriers. Thus, the primary objective of the movement was to reform world view and social practices of the people. It ne ver tried to transform the social system radically, but advocated partial changes in the value system. 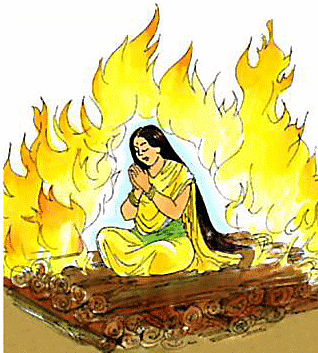 Sati was banned after pressure was mounted by Brahmo Samaj movement

Several reform movements also engendered the socio cultural regeneration, which occurred in the nineteenth century in India. It started with the formation of the Brahmo Samaj in Bengal in 1828  which had braches in several parts of the country. Apart from the Brahmo Samaj in Bengal, the Prarthana Samaj in Maharashtra and the Arya Samaj in Punjab and north India were some of the other reform movements among the Hindus. The work of reformation was also undertaken by other organizations which were led by the backward castes and the members of other religious groups. For example, the Satya Shodhak Samaj of Jyothiba Phule in Maharashtra and the Sri Narayan Dharma Paripalan Sabha in Kerala were started by the backward castes. Similarly, the Ahmadiya and Aligarh movements represented the spirit of reform among Muslims. The Sikhs had their Singh Sabha and the Parsees, the Rehnumai Mazdeyasan Sabha. The major concerns of these movements and the organizations were no doubt religious reform, but the social content was not missing from them. These movements brought about remarkable changes in the life of the people.

Sri Narayan Guru Dharma Paripalana Sabha (SNDP)In the state of Kerala, another leader of the Ezhava caste (an untouchable caste), Shri Narayan Guru (1854-1928) established the SNDP (Sree Narayana Dharma Paripalana Yogam). In Kerala and at many places outside Kerala; Narayan and his associates launched a two point programme for the uplift of the Ezhav as. Firstly, to give up the practice of untouchability with respect to caste s below their caste. As a second step, Narayan Guru built a number of temples which were declared open to all castes. He also simplified rituals regarding marriage, religious worship and funerals. Narayan  Guru  achieved notable success in  transforming the untouchables groups into a backward class. He openly criticized the Congress and Mahatma Gandhi for their lip sympathy towards the lower castes. He criticized Gandhiji for his faith in ChaturVarna, which he maintained is the parent of the caste system and untouchability. He pointed out that the difference in caste is only superficial and emphasized that the juice of all leaves of a particular tree would be the same in content. He gave a new slogan "One religion, one caste and one God for mankind".