Question 1:Name the element whose one of the allotropic forms is buckminsterfullerene.Solution :Carbon

Question 2:What are the two properties of carbon which lead to the formation of a large number of carbon compounds ?Solution :Catenation(Self linking of carbon atoms to form long chains) and Tetravalency.

Question 3:State whether the following statement is true or false :Solution :False

Question 4:Name the scientist who disproved the ‘vital force theory’ for the formation of organic compounds.Solution :Friedrich Wohler.

Question 5:Name the element whose allotropic form is graphite.Solution :Carbon.

Question 6:In addition to some propane and ethane, LPG cylinders contain mainly two isomers of another alkane. Name the two isomers and write their condensed structural formulae.Solution :n-butane and iso-butane.

Question 8:Name the black substance of pencil. Will the current flow through the electrical circuit when we use the sharpened ends of the pencil to complete the circuit ?Solution :GraphiteYes, current will flow through the circuit since graphite is a good conductor of electricity.

Question 9:How does graphite act as a lubricant ?Solution :Graphite is used as a lubricant in the form of graphite powder or mixed with petroleum jelly or with any lubricant oil to form graphite grease.

Question 12:Give the name and structural formula of an alkyl group.Solution :Methyl 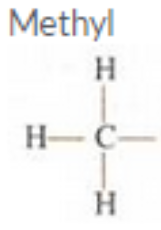 Question 13:Write the electron-dot structures for : (i) ethane, (ii) ethene, and (iii) ethyne.Solution : 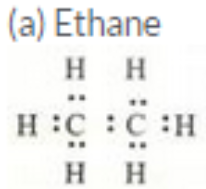 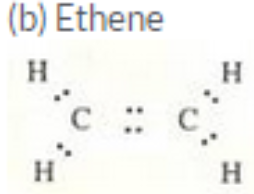 Question 14:Give the IUPAC name of the following compound : C2H6 Solution :Ethane. 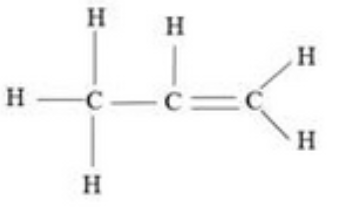 Question 18:What do you call the compounds having the same molecular formula but different structural arrangements of atoms ?Solution :Isomers.

Question 19:Write the names of any two isomers represented by the molecular formula C5H12.Solution :Isopentane and neopentane.

Question 20:Write down (i) structural formula, and (ii) electron-dot formula, of any one isomer of hexane (C6H14), other than n-hexane.Solution :(i) Isomer of hexane: 2-methylpentane 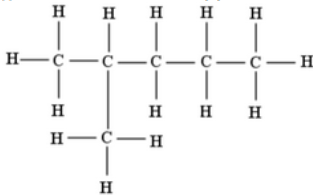 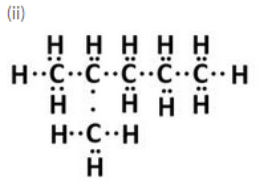 Question 22: (a) What is the atomic number of carbon. Write its electronic configuration. (b) What type of chemical bonds are formed by carbon ? Why ? (c) Name the three allotropic forms of carbon. Solution :(a)The atomic number of carbon is 6. Its electronic configuration is 2,4.(b)Carbon forms covalent bonds because it can achieve the inert gas electron arrangement only by sharing of electrons.(c)Diamond, graphite and buckminsterfullerene.

Question 23:(a) What is the general name of all the compounds made up of carbon and hydrogen ?(b) Why does carbon form compounds mainly by covalent bonding ? Solution :(a) Hydrocarbons(b) Carbon forms covalent bonds because it can achieve the inert gas electronarrangement only by sharing of electrons.

Question 28:(a) Give IUPAC names and formulae of an organic compound containing single bonds and the other containing a triple bond. (b) Which of the following is the molecular formula of benzene ? C6H6, C6H10, C6H12, C6H14 (c) Which of the two has a branched chain : isobutane or normal butane ? Solution :(a) Methane (single bond): CH4Ethyne (triple bond): C2H2(b) Benzene: C6H6(c) Isobutene

Question 29:Catenation is the ability of an atom to form bonds with other atoms of the same element. It is exhibited by both carbon and silicon. Compare the ability of catenation of the two elements. Give reasons. Solution :Carbon forms strong bonds among themselves and with other elements and this makes the carbon compounds stable whereas silicon shows catenation property due to which it forms compounds with hydrogen having chains of up to 7 or 8 silicon atoms; but due to weak bonds, these compounds are unstable.

Question 30:(a) How can diamonds be made artificially ? How do synthetic diamonds differ from natural ones ? (b) Give any two differences between the properties of diamond and graphite. What causes these differences ? Solution :(a)Diamonds can be made artificially by subjecting pure carbon to very highpressure and temperature. The synthetic diamonds are small whereas naturaldiamonds are big.(b)(i) Diamond is hard whereas graphite is soft.(ii)Diamond is a non-conductor of electricity whereas graphite is a good conductor of electricity. The difference in the physical properties of diamond and graphite arises becauseof the different arrangements of carbon atoms in them. 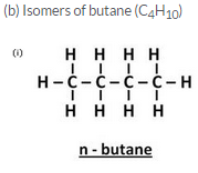 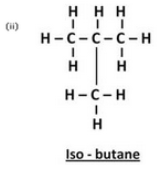 Question 32:(a) Give the name and structural formula of one member each of the following : (i) alkane (ii) alkene (iii) alkyne (iv) cycloalkane (b) Give the common name of (i) ethyne, and (ii) ethene. (c) Write the molecular formula and structure of benzene. Solution : 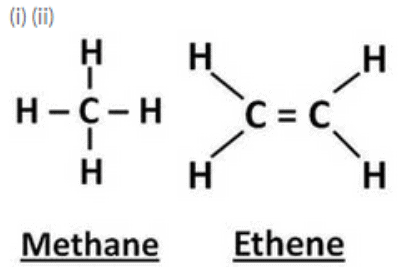 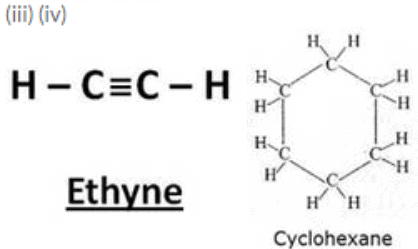 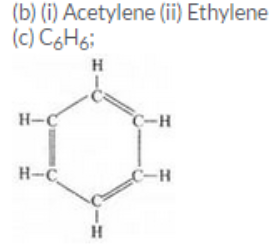 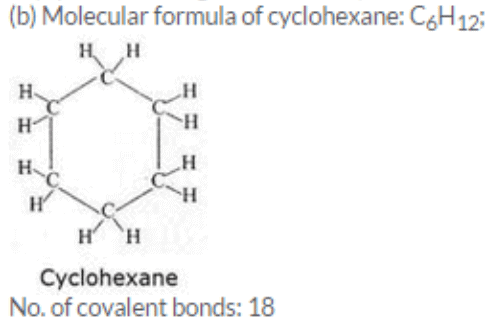 Question 35:(a) Write two points of difference in the structures of diamond and graphite. (b) Explain why, graphite can be used as a lubricant but diamond cannot. (c) Explain why, diamond can be used in rock drilling equipment but graphite cannot. (d) State one use of diamond which depends on its ‘extraordinary brilliance’ and one use of graphite which depends on its being ‘black and quite soft’. Solution :(a) Diamond:(i) Each carbon atom is linked to four other carbon atoms.(ii) A diamond crystal has a tetrahedral arrangement of carbon atoms.Graphite:(i) Each carbon atom is joined to only three other carbon atoms.(ii) A graphite crystal has flat hexagonal rings structure.(b) Due to its softness, powdered graphite can be used a lubricant whereas diamond being extremely hard can not be used as lubricant.(c) Due to its rigid structure, diamond is the hardest known substance to man. Hence, it is used in rock drilling equipments but graphite is soft and hence not used in rock drilling equipments.(d) Diamonds are used for making jewellery.Graphite is used for making pencil cores or ‘pencil leads’.

Question 36:(a) What is diamond ? Of what substance is diamond made ? (b) Describe the structure of diamond. Draw a simple diagram to show the arrangement of carbon atoms in diamond. (c) Explain why, diamond has a high melting point. (d) State any two uses of diamond. Solution :(a) Diamond is a colourless transparent substance having extraordinary brilliance. It is made up of carbon.(b) A diamond crystal is a giant molecule of carbon atoms. Each carbon atom in the diamond crystal is linked to four other carbon atoms by strong covalent bonds. The four surrounding carbon atoms are at the four vertices of a regular tetrahedron. This rigid structure of diamond makes it a very hard substance. 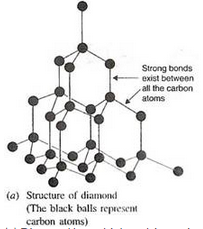 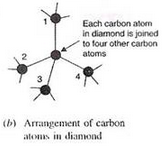 (c) Diamond has a high melting point because a lot of heat energy is required to break the network of strong covalent bonds in the diamond crystal.(d) (i) Used in rock drilling equipment (ii) Used in making jewellery. 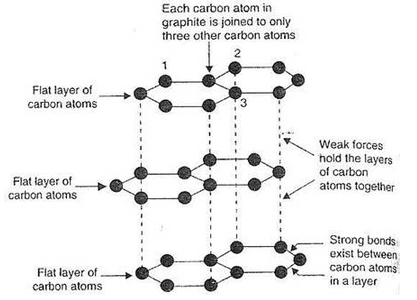 (c) Due to the presence of free electrons in a graphite crystal, it conducts electricity however; a diamond crystal does not have free electrons so it does not conduct electricity.(d) (i) Used as a lubricant (ii) Used for making pencil leads.

Question 38:(a) Explain the term ‘isomers’. Give one example of isomers. (b) Write (i) structural formula, and (ii) electron-dot structure, of any one isomer of n-heptane (C7H16) (c) Write IUPAC name of the compound having the formula n-C4H10. (d) Give the IUPAC names for the following :

Solution :(a) The organic compounds having the same molecular formula but different structures are known as isomers for ex: n-butane and iso-butane are isomers.