Question 31:(a) Write the name and formula of an organic compound containing a ketone functional group. (b) Write the names and formulae for the first three members of the homologous series of chloroalkanes. (c) How would you name the following compound ? CH3—CH2—Br Solution :(a) Acetone – CH3COCH3(b) (i) Chloromethane – CH3Cl(ii) Chloroethane – C2H5Cl(iii) Chloropropane – C3H7Cl(c) Ethylbromide(a) Ketones(b) CH3COOH(c) Formaldehyde

(a) A homologous series is a group of organic compounds having similar structures and similar chemical properties in which the successive compounds differ by CH2 group.

Question 35:(a) Match the formulae in group A with appropriate names from group B : Group A : CH3COOH, CH3CHO, CH3OH Group B : Ethanol, Methanol, Ethanal, Ethanoic acid (b) Draw the structure of butanoic acid. (c) What is the IUPAC name of acetic acid ? Solution : 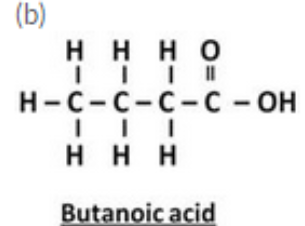 Question 37:(a) What is the molecular formula and structure of the alcohol which can be thought to be derived from pentane ? (b) Write the names of the following functional groups :

(c) What makes the candle flame yellow and luminous ? Solution :(a) C5H12O or C5H11OH(b) (i) Aldehyde group(ii) Alcohol group(iii) Carboxylic acid group(iv) Ketone group(v) Halo group(c) When a candle is lighted, the wax melts, rises up the wick and gets converted into vapours. In a candle, there is no provision for the proper mixing of oxygen (of air) for burning wax vapours. So, the wax vapours bum in an insufficient supply of oxygen (of air) which leads to incomplete combustion of wax. This incomplete combustion of wax produces small unburnt carbon particles. These solid carbon particles rise in the flame, get heated and glow to give out yellowish light. This makes the candle flame yellow and luminous. 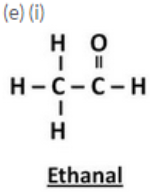 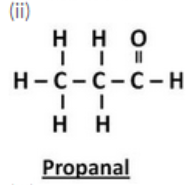 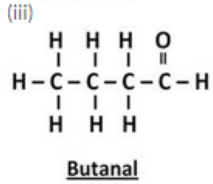 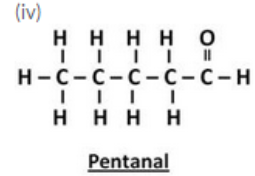 (a) When carbon is burned in air, it forms carbon dioxide gas and releases a large amount of heat and some light:

(b) Coal and petroleum are called as fossil fuels because they were formed by the decomposition of the remains of the pre-historic plants and animals (fossils) buried under the earth long, long, ago.

(c) Coal was formed by the decomposition of large land plants and trees buried under the earth millions of years ago. It is believed that millions of years ago, due to earthquakes and volcanoes, etc., the forests were buried under the surface of the earth and got covered with sand, clay and water. Due to high temperature and high pressure inside the earth, and in the absence of air, wood was converted into coal.

(d) Petroleum oil (and natural gas) was formed by the decomposition of the remains of extremely small plants and animals buried under the sea millions of years ago. It is believed that millions of years ago, the microscopic plants and animals which lived in seas, died. Their bodies sank to the bottom of the sea and were soon covered with mud and sand. The chemical effects of pressure, heat and bacteria, converted the remains of microscopic plants and animals into petroleum oil and natural gas just as they converted forest trees into coal. This conversion took place in the absence of oxygen or air. The petroleum thus formed got trapped between two layers of impervious rocks (non-porous rocks) forming an oil trap.

Question 56:An organic compound having the molecular formula C2H60 can exist in the form of two isomers A and B having different functional groups. The isomer A is a liquid which is used as a solvent for nail polish. The isomer B is also a liquid. An aqueous solution of one of the lower homologues of B is used for preserving biological specimens in the laboratory (a) What is compound A ? (b) Write the electron-dot structure of A. (c) What is compound B ? (d) Write the electron-dot structure of B. (e) Name the lower homologue of compound B which is used in preserving biological specimens. Solution :

(e) Methanal (or Formaldehyde) is used in preserving biological specimens.

Question 57:A hard material X which is mined from the earth is used as a household fuel and also for the generation of electricity at Thermal Power Stations. A soft material Y is also used as a fuel in the form of candles. A gaseous material Z which occurs along with petroleum is increasingly being used as a fuel in running vehicles in its compressed form. (a) What are materials, X, Y and Z ? (b) When materials X, Y and Z are burned separately : (i) Which material burns by producing a yellow, luminous flame ? (ii) Which material ultimately burns without producing a flame ? (iii) Which material can burn in a gas stove by producing a blue flame ? Solution :(a) X is coal; Y is wax; Z is natural gas(b)(i) Y (wax)(ii) X (coal)(iii) Z (natural gas)

Question 1:Name the gas evolved when ethanoic acid is added to sodium carbonate. How would you prove the presence of this gas ? Solution :Carbon dioxide (CO2) gas is evolved in the reaction. When passed through lime water, it turns lime water milky.

Ethanol reacts with sodium metal to form sodium ethoxide and hydrogen gas. This reaction is used as a test for ethanol. When a small piece of sodium metal is put into ethanol in a dry test tube, rapid effervescence is produced due to evolution of hydrogen gas.

Question 13:What are the raw materials required for making soap in a laboratory (or at home) ? Solution :(i) Vegetable oil (like castor oil, cottonseed oil or soyabean oil)(ii) Sodium hydroxide (caustic soda)(iii) Sodium chloride (common salt)

Question 16:Why is the conversion of ethanol into ethanoic acid an oxidation reaction ? Solution :

Oxidation means controlled combustion. When ethanol is heated with alkaline potassium permanganate solution (or acidified potassium dichromate solution), it gets oxidised to ethanoic acid. It is called an oxidation reaction because oxygen is added to it during this conversion.