The document Solutions of Electricity (Page No- 5) - Physics By Lakhmir Singh, Class 10 Class 10 Notes | EduRev is a part of the Class 10 Course Lakhmir Singh & Manjit Kaur Solutions: Class 10 Science.
All you need of Class 10 at this link: Class 10

Question 1:By what other name is the unit joule/coulomb called ?Solution :Volt

Question 6:What is the SI unit of potential difference ?Solution :Volt

Question 8:What is the unit of electric charge ?Solution :Coulomb

Question 9:Define one coulomb charge.Solution :One coulomb of charge is that quantity of charge which exerts a force of 9 × 109 Newton on an equal charge is placed at a distance of 1 m from it.

Question 10:Fill in the following blanks with suitable words :(a) Potential difference is measured in………….. by using a……………. placed in………… across a component.(b) Copper is a good………….. Plastic is an……………Solution :(a) volts; voltmeter; parallel(b) conductor; insulator 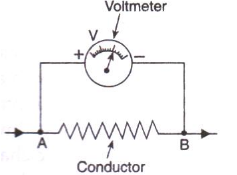 (e) Voltmeter has a high resistance so that it takes a negligible current from the circuit.

Question 22:Three 2 V cells are connected in series and used as a battery in a circuit. (a) What is the p.d. at the terminals of the battery ? (b) How many joules of electrical energy does 1 C gain on passing through (i) one cell (ii) all three cells ?Solution :(a) If three cells of 2 volt each are connected in series to make a battery, then the total potential difference between terminals of the battery will be 6V.(b) (i) Given: p.d. = 2V, Charge moved = 1CWe know thatWork done = p.d. x charge moved= 2 x 1Work done = 2 joules(ii) Given: p.d. = 6V, Charge moved = 1CWork done = p.d. x charge moved= 6 x1Work done = 6 joule.