The document Numericals with Answers - Motion Notes | Study Science Class 9 - Class 9 is a part of the Class 9 Course Science Class 9.
All you need of Class 9 at this link: Class 9

Ques 1: A farmer moves along the boundary of a square field of side 10 m in 40 s. What will be the magnitude of displacement of the farmer at the end of 2 minutes 20 seconds?Ans: Distance covered in one round = 40 mTime taken = 40sTotal time of journey = 2 min. 20s = 140 sTotal distance covered = 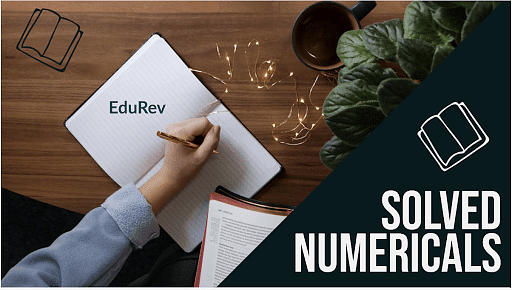 Ques 2: In a long-distance race the athletes were expected to take four rounds of the track such that the line of finish was the same as the line of start. Suppose the length of the track was 200 m(i) What is the total distance to be covered by the athletes?(ii) What is the displacement of the athletes when they touch the finish line?(iii) Is the motion of the athlete's uniform or non-uniform.(iv) Is the displacement of an athlete and the distance moved by him at the end of the race equal?

Ans: (i) Total distance covered = 4 × 200m = 800 m(ii) As the athletes finish at the starting lineDisplacement = final position-initial positive = rA-rA = 0(iii) Motion is non-uniform as the direction of motion of the athlete is changing while running on the track.(iv) Displacement and distance moved are noted as Casual.Ques 3: On a 120 km track, a train travels the first 30 km with a uniform speed of 30 km/h. How fast must the train travel the next 90 km so as to average 60 km/h for the entire trip?

Time taken left to complete second part of the tript2 = t - t1 = 2 - 1 = 1hDistance to be covered in second part of the tripd2 = 90 kmreQues uired speed in second partv2 = ?speed = distance/timev2 = d2/t2 = 90 km/h Ques 4: Nisha swims in a 90 m long pool. She covers 180m in one minute by swimming from one end to the other and back along the same straight path. Find the average speed and average velocity of Nisha. Ans: 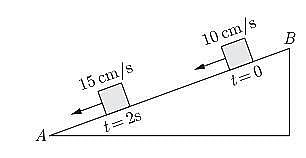 Ques 10: Figure shows the distance-time graph of two objects A and B which object is moving with greater speed when both are moving?

Ans: The line for object B makes a longer angle with the time-axis. Its slope is longer than the slope of the line for object A. Thus, the speed of B is greater than that of A.Ques 11: Figure represents the speed-time graph for a particle. Find the distance covered by the particle between t = 10 min. and t = 30 min. 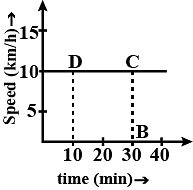 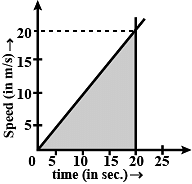 Ans: The distance covered in the time interval 0 to 20 s.

- Go through detailed chapter notes of this chapter here.

- You can find NCERT Solution of the chapter here.

The document Numericals with Answers - Motion Notes | Study Science Class 9 - Class 9 is a part of the Class 9 Course Science Class 9.
All you need of Class 9 at this link: Class 9