Problem 2: The pKa of the carboxyl group in an amino acid valine, (CH3)2CHCH(NH2)(COOH) is 2.31 and the pKa for the amino group of the same amino acid is 9.69. Compute the Isolectric point (pI) for valine and draw the structure of this amino acid when the pH of the solution equals to p1. Also draw the structures of valine that predominate at pH =2 and pOH =2.

The dissociation of cationic form of valine can be represented as:

When the p1-I of the solution equals to p1, the structure of valine is

When the pH of the solution is two, the structure of valine is

When the pH of the solution is 12, the structure of valine is

Problem 3: Sucrose on hydrolysis yields a mixture which is

Solution: (c) Sucrose on hydrolysis yields equimolar mixture of D-(—)-fructose and D-(+)glucose. Since specific rotation of D(—)-fructose is greater than (+)-glucose D, the mixture is laevorotatory.

Problem 4: A high molecular weight molecule which does not contain repeating structural units is called a

Problem 5: The force of attraction between the neighbouring peptide chains is

Problem 6: Peptides on hydrolysis give

Problem 7: An example of a condensation polymer is

Solution: (b) In condensation polymerization, a series of condensation reactions between the (generally two) monomers containing atleast two functiønal groups each occur with the loss of a small molecule such as H2O, CH3OH or HX (X = halogen). Terylene is a condensation polymer of ethylene glycol and terephthalic acid.

Solution: As poly (vinyl chloride) is able to show stereoisomerism and further it is formed by a free radical process, it is atactic (chlorine atoms (distributed randomly), the molecules fit together poorly.

Poly (vinylidene chloride) has two identical substitutents on each carbon and the chains fit together well.

Problem 9: Compound A C5H10O4, is oxidized by Br2-H2O to the acid, C5H10O5. (A) Forms a triacetate (Ac2O) and is reduced by HI to n-pentane. Oxidation of (A) with HIO4 gives, among other product, 1 molecule of CH2O and 1 molecule of HCO2H. What are the possible strcutures of (A) and how could you distinguish between them ?

Solution: (A) is an aldehyde, contains three hydroxyl groups and the carbon skeleton consists of five carbon atoms in a straight chain. Also, the formula C5H10O4 therefore suggests that (A) is a deoxy-sugar. If we now try to work out the possibilities based directly on the periodic oxidation of (A), we shall find it. 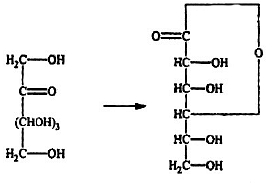 Problem 11: i) Sulphanilic acid although has acidic as well as basic group, it is soluble in alkali but insoluble in mineral acid.

ii) Sulphanilic acid is not soluble in organic solvents.

The weakly acidic -NH3  transfers H  to OH_ to form a soluble salt, P-NH2-C6H4-SO 3_Na  on the other hand _SO3_ is too weakly basic to accept H from strong acids.

iii) Due to its ionic character it is insoluble in organic solvents.

Problem 13: What is the structure of nylon-6, made by alkaline polymerisation of caprolactum ?

Solution: The configuration of these carbons which are unchanged in the reactions, must be identical in order to get the same osazone.

a) Nylon-6: Another polymer of this class is nylon-6. It is a monomer of caprolactum which is obtained from cyclohexane.

It used for making tyre cords, fabrics and ropes.

These polymers are formed by the condensation of two or more monomers with the elimination of simple molecules like H2O, NH3, ROH etc.

Problem 14: Supply structures for H through K. Given :

(b) Explain the last step (c). What is net structural change (d) Name this overall method. (c) Discuss the possibility of epimer formation.

b) The acetates undergo trans-esterification to give methyl acetate freeing all the sugar OH's. This is followed by reversal of HCN addition.

c) There is loss of one C from the carbon chain.

e) The -CHOH becomes the -CH = O without any configurational changes of the other chiral carbons. Thus, no epimers are formed.

Solution:  -COOH is too weakly acidic to transfer H  to the weakly basic -NH2 attached to the electron withdrawing benzene ring. When attached to an aliphatic carbon, the -NH2 is sufficiently basic to accept H  from -COOH group.

Problem 16: Why should isoelectric point for Aspartic acid (2.98) be so much lower than that of leucine ?

Solution: This may be explained by considering following ion equilibrium

It is apparent that ions (A) and (B) are neutral, while (C) is a cation and (D) is dianion. In species (D), the anion is derived from the second -COOH group present in aspartic acid and is not possible in leucine. At neutral pH a significant concentration of (D), will be present in aqueous solution. It will therefore, be necessary to decrease the pH of such a solution if the formation of (D) is to be suppressed to a stage where anions and cations are present in equal concentration (the isoelectric point).

Problem 17: (a) Show how an aldohexose can be used to synthesize 2-ketohexose.

(b) Since glucose is converted to fructose by this method, what can you say about the configuration of C3, C4 and C5 in the sugars.

Problem 18: Starch is polymer of:

Solution: (b) Starch is homopolysaccharide of glucose having 24 — 30 glucose units.

Problem 19: The commonest disaccharide has the molecular formula

Solution: (d) The most common disaccharide is sucrose, whose molecular formula is C11H22O11.

Solution: (d) Glycine and all other amino acids are amphoteric because of the presence of NH2 and CO2H group both. The amino acid exists as Zwitter ion and acidic group is —NH3  while basic group is —CO2_

Problem 21: Sugars are characterised by the preparation of osazone derivatives. Which sugar have identical osazones.

Solution: (b) The reaction with phenyl hydrazone gives same osazone because glucose and fructose differ only on carbon atoms 1 and 2 which are involved in osazone formation.

The process is known as inversion of cane sugar.