The document Speciation, Evolution and Classification (Deducted from CBSE 2021-22 examination) Notes | Study Science Class 10 - Class 10 is a part of the Class 10 Course Science Class 10.
All you need of Class 10 at this link: Class 10

Biological species concept: A species is a sexually interbreeding group of individuals separated from other species by the absence of genetic exchange. Members of species are capable of breeding with one another and produce living, fertile offspring but are unable to breed with members of other species normally. Gene Pool of a Population of FrogsOn basis of period taken in speciation, there are two types of mechanism of speciation.

Speciation: The process of formation of one or more new species from an existing species is called speciation.

Let us try to understand this concept by taking the example of beetles. ABOVE EXAMPLE OF SPECIATION SHOWS THAT:

EVOLUTION AND CLASSIFICATIONClassification: Classification is the system of arrangement of organism in certain groups or subgroups on the basis of hierarchies of certain characteristics.

The characteristics are the details of appearance from structure, function and behaviour. Phylogenetic taxonomy is a branch of classification on the basis of evolutionary relationship on the basis of common ancestry.

Flow chart of basic characters shared by most of the organisms: TRACING EVOLUTIONARY RELATIONSHIPStudies on similarities in structure of different organisms suggests that present forms have evolved through a process of slow and gradual change called evolution. They include the following : 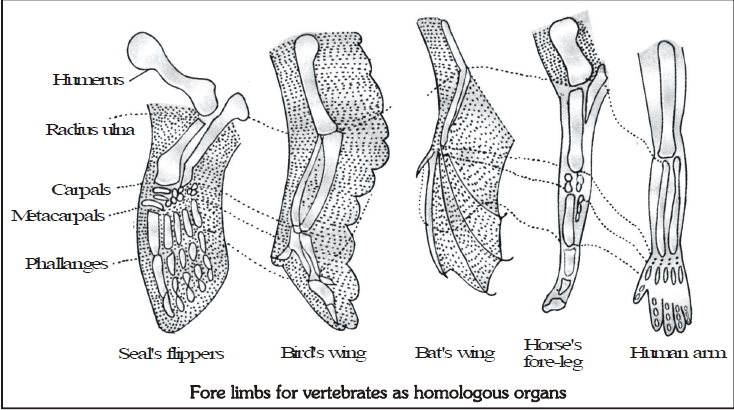 2. Analogous : Those organs which have different origin and structural plan but appear similar and perform similar functions are called analogous organs. While this relationship is called convergent evolution or analogy.

eg : Wing of an insect and a bird, Hand of man & Trunk of elephant. Analogy in these organs is due to similar adaptations to perform similar functions rather than their common ancestry.

3. Vestigial organs : Those organs which no longer have a function are called vestigial organs. These organs have reduced structurally as well as functionally. It appears that these organs were once well developed and functional in ancestors and later on due to their less use they became reduced.

(ii) Euglena → Between plants and animals

(iii) Proterospongia → Between protozoa and porifera

(iv) Neopilina → Between annelida and mollusca

(v) Peripatus → Between annelida and arthopoda

(vi) Archaeopteryx → Between reptiles and birds

(x) Platypus → Between reptiles and mammals

(xi) Echidina → Between reptiles and mammals 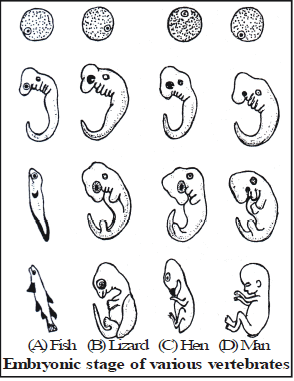 Jurassic period is known as golden age of reptiles.Dinosaurs of Dromaeosauridae family had feather on body and fore limb.Huxley called birds as glorified reptiles.Carnivorous dinosaurs called Velociraptor had a fish bone like birds.

Evidences from embryology:A comparative study of the stages of embryonic development of animals reveals that in their early stages they were very similar.These embryonic stages reflect ancestry. The embryological stages of an organism give us an idea about the stages of its evolution. For example when we study the human embryo, we find that at a certain stage it has gills. This suggests that fish is one of the earliest ancestors in the evolution of mammals including human beings.

The document Speciation, Evolution and Classification (Deducted from CBSE 2021-22 examination) Notes | Study Science Class 10 - Class 10 is a part of the Class 10 Course Science Class 10.
All you need of Class 10 at this link: Class 10