Rise of the Marathas

The Entry of the English into Maratha Politics

The English in Bombay wanted to establish a government on the lines of the arrangement made by Clive in Bengal, Bihar and Orissa. 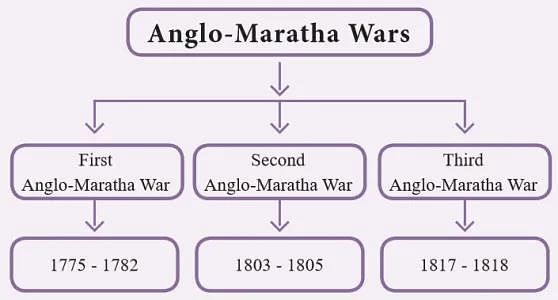 Why the Marathas Lost

The Conquest of Sindh

Criticisms of the Conquest of Sindh

➢ Consolidation of Punjab under the Sikhs

➢ Ranjit Singh and the English

The Napoleonic danger receded and the English became more assertive, Ranjit Singh agreed to sign the Treaty of Amritsar (April 25, 1809) with the Company.

Stages of Application of Subsidiary Alliance(i) The first stage, the Company offered to help a friendly Indian state with its troops to fight any war the state might be engaged in.(ii) The second stage consisted of making a common cause with the Indian state now made friendly and taking the field with its soldiers and those of the state.(iii) The third stage when the Indian ally was asked not for men but money. The Company promised that it would recruit, train, and maintain a fixed number of soldiers under British officers and that the contingent would be available to the ruler for his personal and family's protection as also for keeping out aggressors, all for a fixed sum of money.(iv) In the fourth or the last stage, the money or the protection fee was fixed, usually at a high level; when the state failed to pay the money in time, it was asked to cede certain parts of its territories to the Company in place of payment.

States which Accepted Alliance The Indian princes who accepted the subsidiary system were: (i) The Nizam of Hyderabad (September 1798 and 1800)(ii) The ruler of Mysore (1799), The ruler of Tanjore (October 1799)(iii) The Nawab of Awadh (November 1801)(iv) The Peshwa (December 1801)(v) The Bhonsle Raja of Berar (December 1803)(vi) The Sindhia (February 1804)(vii) The Rajput states of Jodhpur Jaipur, Macheri, Bundi and the ruler of Bharatpur (1818)(viii) The Holkars were the last Maratha confederation to accept the Subsidiary Alliance in 1818.

Lawrence’s policy rested on the fulfilment of two conditions I. that the peace at the frontier was not disturbed and II. that no candidate in civil war sought foreign help.

Lytton, a nominee of the Conservative government under Benjamin Disraeli (1874-80), became the Viceroy of India in 1876. He started a new foreign policy of 'proud reserve', which was aimed at having scientific frontiers and safeguarding spheres of influence.

Sher Ali fled in face of the British invasion, and the treaty of Gandamak (May 1879) was signed with Yakub Khan, the eldest son of Sher Ali. Treaty of Gandamak (May 1879) the treaty signed after the Second-Anglo Afghan War provided that:(i) The Amir conduct his foreign policy with the advice of the Government of India.(ii) A permanent British resident be stationed at Kabul and(iii) The Government of India give Amir all support against foreign aggression and an annual subsidy.

British India and the North-West Frontier

This document is just a brief about the expansion of British power in our country. In the upcoming documents these topics will be dealt in detail. In the next EduRev document you will read about the revolts that happened all over the country which created sparks for the first war of Independence in 1857.