The sprinkler irrigation is one of the pressurised irrigation methods, in which water is sprayed into the air and fall on the ground surface somewhat resembling rainfall. The spray of water is developed by the flow of water under pressure through small orifices or nozzles. The pressure created by the pump, which causes the water to flow out through the sprinkler nozzle. The nozzles are mounted on the pressurized pipe system. With careful selection of nozzle sizes and spacing, sprinkler pipe spacing and operating pressure the amount of irrigation water required to fill the crop root zone can be applied nearly uniform at the sprinkling rate to suit the infiltration rate of soil. Pipes used for the sprinkler irrigation system are usually light in weight hence can be conveniently installed and transported in the field from one place to another. The pipes need to be flexible, crack and impact-proof, capable to sustain the desired pressure and temperature; and durable.In this system the water is supplied from the water source through network of pipes and sprinkler nozzles located at a fixed height and a velocity which breaks water jet into small droplets that fall on to the soil or crop surface. As water is not allowed to flow over land surface, the water losses in the process of conveyance and distribution are completely eliminated. Hence compared to surface irrigation methods, high irrigation efficiency is achieved in sprinkler irrigation method of water application. The sprinkler irrigation system requires less labour than surface irrigation. This method is highly suitable on sandy soils where water lost through infiltration is very high. Fig. 35.1 shows application of irrigation water in the form of spray resembling rainfall through sprinkler nozzles using a pump for developing the required pressure. 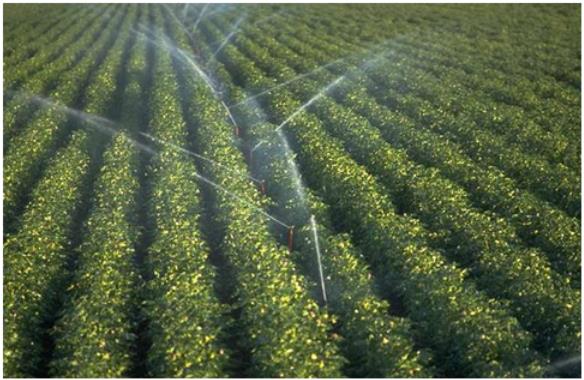 35.1 Critical Appraisal of the Adaptability of Sprinkler IrrigationSprinkler system needs the various essential components to enable the water to fall on soil surface in the form of spray and hence involves high initial capital cost. Comparatively sprinkler system requires higher pressure to develop the spray having the droplets of required size, hence this method needs more energy than other water application methods. The method also requires needs high operational skills, desired pressure, application rate, droplet sizes and application uniformity are to be maintained for successful implementation. The maintenance cost of various components used in the system is relatively greater. Hence there exists a need to make efficient design and layout the system to tap its full potential for water saving and crop yield.

35.2 Advantages and Limitations of Sprinkler IrrigationAdvantages(i) In sprinkler method of irrigation the water is moved through the network of pipes from the source to the field, thereby minimising the water losses in the process of conveyance and distribution. The studies conducted in different parts of India showed that this method can save water to the extent of 30 per cent compared to surface irrigation method. Hence this method has the distinct advantage of water saving over surface irrigation methods.(ii) Frequent application of water and depths matching with the water requirement of crops. Therefore it is possible to maintain the soil moisture in the root zone of crops within allowable depletion level for a specified type of soil.(iii) As there is no overland flow, water is not moved on land surface, this method is suitable for irrigating all types of soils except very heavy clay. This method is particularly suitable for irrigating close growing crops where the plant population per unit area is more.(iv)It is suitable for oil seeds and cereal and vegetable crops.(v) It is not necessary to overland flow by gravity therefore expenditure of land levelling and smoothening are not required done in surface irrigation methods.(vi)There is no necessity of making bunds, ridges, field channels etc. for ponding or guiding water. The land used for these construction is saved and can be used for crop cultivation.(vii) Due to high pressure requirement the nozzles are less susceptible to clogging compared to drip irrigation method.(viii) Chemicals and fertilizers can be applied along with water.(xi) This method saves the fertilizers and other nutrients there is no deep percolation and leaching.(x) The damage on vegetables, citrus, apple, mango, litchi, and other fruit crops to fog, frost and high solar radiations can be protected.(xi) High water use efficiency can be achieved with proper planning and design of sprinkler irrigation system.(xii) Plant protection chemicals can be applied to distant part of plant, which is not possible in other methods of irrigation.

LimitationsAlongside the different benefits offered by this method as explained above, there are certain limitations of this method. These are stated below.

(i) High initial investment as compared to surface irrigation methods.

(ii) The fine-textured soils which have a low infiltration rate cannot be irrigated efficiently.

(iii) Sprinkler irrigation is not feasible in hot climate and high wind areas, as major portion of water will be lost through evaporation and water distribution is affected due to high wind speed.

(v) Not suitable for crops that require ponding water. However, research experiments on paddy crops have given promising results.

(vi) In humid regions, not suitable for crops prone to diseases due to moist environment.

(vii) Water with impurities and sediments may damage the system components.

35.3 Scope and Status of Sprinkler Irrigation in India

Agricultural sector is the largest consumer of water and consuming more than 80% water available. However the demand of water has been consistently increasing from other sectors like municipal, industry, hydropower etc. and each of these sectors is provided water often be at the cost of agriculture. The surface method of irrigation is practiced in large parts of the country. In this method more than 50% of applied water is lost in the process of conveyance, application, runoff and evaporation and less than 50% water is utilized for consumptive use of crop. The drip and sprinklers methods of water application, the crop efficiency utilize water for consumptive use. The drip and sprinkler methods saves the water more than 50% of water applied and hence these methods assume high importance. Hence these two methods are to be used for efficient distribution and application of water for crop production under the circumstances of increasing competition of water from other sectors and need to bring more area under irrigation due to increased demand for food.

In India, the area irrigated by the sprinkler system is about 3.59 million ha, which is less than 2.5 % of the total area under irrigation. Table 35.1 provides the statistics of a area under sprinkler and drip irrigation systems in different states of India. As on March 31, 2012 Rajasthan has the largest area under sprinkler irrigation followed by Haryana. The sprinkler system was first introduced in the mid-1950s by few progressive farmers of the Narmada valley in Madhya Pradesh, Southern region of Haryana and north eastern part of Rajasthan and parts of Punjab to overcome the problem of water scarcity. Realizing the importance of this system, its adoption later spread to more areas in these states and also in the states of Maharashtra and Karnataka. It is estimated that about 1, 35,000 sprinkler sets were in use in India in 1997 (INCID, 1994). About 65 % of the area under sprinkler irrigation is under field crops like cereals, pulses, oilseeds, cotton, sugarcane and vegetables and the rest 40% under tea, coffee and cardamom plantations in the Western Ghats region and in the North Eastern states. The popularization of sprinkler irrigation in India received significant support from the various schemes involving subsides by the central and state governments. In India, per hectare investment for irrigation projects has increased enormously. Therefore it is necessary to bring more area under sprinkler and drip irrigation methods so that the saved water can utilized for bringing more area under irrigation. In view of the scarcity of water and the cost escalation of irrigation projects, it is essential and necessary to economize the use of water and at the same time increase the productivity per unit area. This could be achieved only by large-scale adoption of sprinkler and drip irrigation systems for achieving economy. The application of sprinkler and drip irrigation at commercial level was encouraged by the formation of a National Committee on the use of Plastics in Agriculture under the Ministry of Agriculture Government of India. Later on it was renamed as the National Committee on Plasticulture Applications in Horticulture. The Committee established twenty two Precision Farming Development Centres in different agro climatic regions of the country for conducting research on micro irrigation and to take the proven technologies to the farmers through demonstrations and training. Thus in view of water scarcity, growing demands of water from other sectors, increasingly high investment of creation of new water resources and encouragement of State and Central Governments, there is scope for adoption of sprinkler and drip irrigation methods of irrigation in India Tiwari (2009).Table 35.1. Area under Sprinkler and Drip Irrigation Methods