An argument is basically a combination of three things:

A proposal is followed by two arguments. An argument may be in favour of or against the proposal. One has to check the strength of the argument. This cannot be misconstrued as considering only favourable arguments. It is irrelevant whether an argument is favourable or adverse to a proposal. Both favourable & adverse arguments are considered provided both of them are strong enough in their own ways. Strength of an argument

An argument is considered to be strong, if it provides a valid & directly related reason either in favour of or against the proposal made.

While considering the arguments, one has to adhere to the following norms: 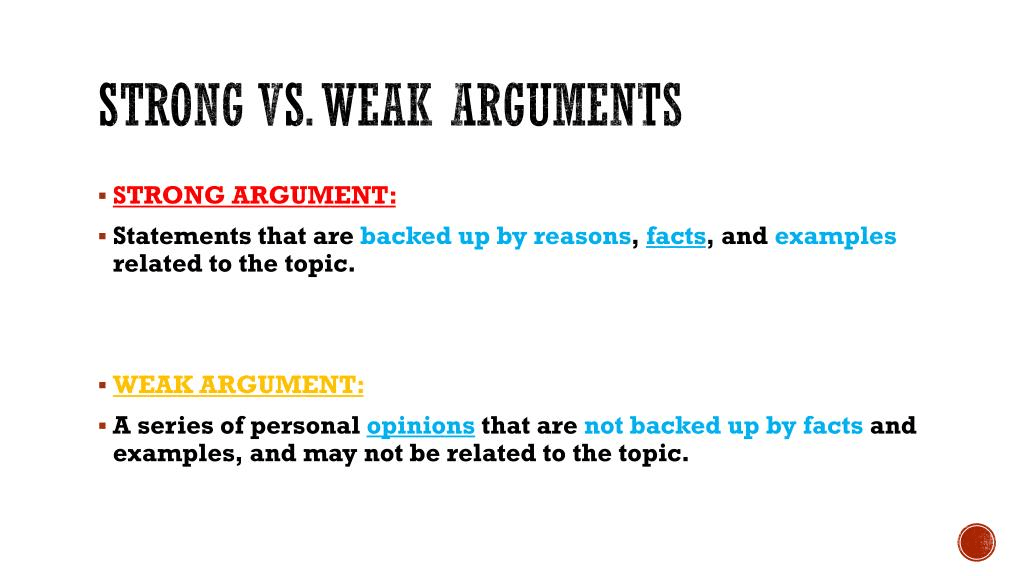 Statement: - Should there be a law to punish parents who get their minor children married?

I. Yes, a minor girl is physiologically not prepared to conceive a baby.

II. No, this has been a custom prevailing since many centuries.

a) the only argument I is strong

b) if only argument II is strong

c) neither I nor II is strong

d) if both I and II are strong.

The correct answer is statement (a).

Statement I explains a valid reason to go against such marriages because it is wrong to encourage anything that jeopardises the health of a person. Hence, (I) is a strong argument.

Statement II is not a valid argument because a custom being followed since a long time does not necessary make it good. Only I is strong.

Statement: Should the young entrepreneurs of India be encouraged?

I: Yes, they will help in the industrial development of the country.

II: Yes, that will reduce the burden on the employment market.

a) the only argument I am strong

b) if only argument II is strong

c) neither I nor II is strong

d) if both I and II are strong.

The correct answer is statement (a)

Explanation: Not every state will have a yes and no argument. Some will two ‘yes’ or two ‘no’ arguments. Now, looking at both the statements and understand them one by one. In statement I, by encouraging young entrepreneurs there will certainly be an industrial development.

For the statement II, by encouraging the young entrepreneurs in India there will be many fields and opportunities open for setting up of new organizations. Thus it will be helpful. So, both the arguments are given in question are strong. So, the correct answer is (d).

Question for Strong & Weak Arguments
Try yourself:Statement: Should the crackers be completely banned in India?

Arguments.
I: Yes, the use of child labours in the manufacturing of firecrackers is very high.
II: No, the jobs of thousand workers will be hindered.

Statement: In a T20 match played between India and Australia, the total runs made by the Indian team were 200. 160 runs out of 200 runs were made by spinners.

Conclusion I: 80% of the team consists of spinners

(a) Only Conclusion I is true

(b) Only Conclusion II is true

(c) Both Conclusion I and II are true

(d) Neither Conclusion I nor II is true

(e) Either Conclusion I or II is true

Explanation: Neither conclusion is logically correct with regard to the statement.

Statements: National Aluminium Company has moved India from a position of shortage to self-sufficiency in the metal.

I. Previously, India had to import aluminium.

II. With this speed, it can soon become a foreign exchange earner.

(a) Only Conclusion I is true

(b) Only Conclusion II is true

(c) Both Conclusion I and II are true

(d) Neither Conclusion I nor II is true

(e) Either Conclusion I or II is true

The correct answer is option (e)

Explanation: According to the statement, National Aluminium Company has moved India from a position of shortage in the past to self-sufficiency in the present. This means that previously, India had to import aluminium. So, I follows. Also, it can be deduced that if production increases at the same rate, India can export it in future. So, II also follows.

Question for Strong & Weak Arguments
Try yourself:Statement: In India, there should be more and more emphasis given to the agricultural engineering and technological fields instead of pure and basic science.

Conclusion
1. Sufficient development has been achieved in India in the field of basic and pure science.
2. The production industry in India was neglected in the past.

The statement given in the question states that the emphasis should be laid more on the agricultural and technological field instead of basic and pure science. But there is no mention of the achievements of science. So, it cannot be clearly said whether the achievement in science is sufficient or not. Similarly, there is no mention of production sector and thus it cannot be stated whether it was neglected or not. So, neither statements can be concluded and thus the correct answer is C.