Compounds having the same M.F. and different in connectivity of atom (Structure is different). 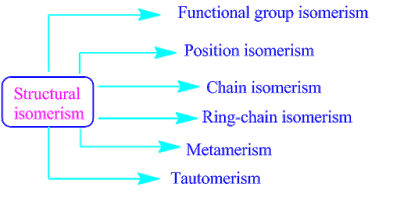 Compounds having same molecular formula but differ in the length of the principal chain.

* To prepare the neo compound firstly the above group

is written. After that required no. of carbon is added in the straight chain.

dark line (-) represents vacant valency where any group can be attached.

Thus we can conclude that 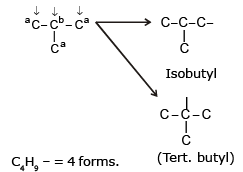 Ex.1 Find all the structural isomers of C6H14

Compounds having same molecular formula and same principal chain but differ in position of functional group, multiple bond and substitution group are known as position isomers.

*  and  are chain isomers, not position isomers.

The above example can be best understood taking the following example

In this, the last carbon has been placed to IInd position to form chain isomer the same has happened with above example and hence they are chain isomer to each other.

Ex.2 Find the relation between the given compounds:

* Monochlorination →Replace one H by Cl

Ex.3 How many monochloro derivative will be of C4H10 (Only structural)

Ex.4 An alkane having molecular formula C5H12 can give only one product on monochlorination. Find the IUPAC name of the alkane.

Sol. For solving these kinds of problems we should at once draw all possible structures of corresponding alkanes and then we should check how many possibilities are there to put double bond.

* To form cyclic structural we should always start with 3 carbon ring.

i.e. possibility = one triple bond, or 2 double bond or (one ring + one double bond)

* To find di or trichloroderivative

We place two or three chlorine at last carbon and after that rotate one Cl by keeping the other two at the same the place.

Ex.9 Find all the structural dichloroderivative of cyclopentane.

Compounds having same molecular formula but different in functional group are known as functional isomers.

* Alcohol and ether are functional isomers to each other.

* Acids and ester are functional isomers to each other.

Ex.10 How many primary, secondary and tertiary alcohol are possible for C5H13O ?(Only structural)

Ex.11 How many ethers are possible in C5H12O.(Only structural).

Ex.13 For molecular formula C4H9NO, how many amide will be there which will not form H-bond ?(Only structural)

Ex.15 Find the total no. of acid and esters from C4H8O2(Only structural)

Ex.17 How many aromatic isomers will be possible for C7H8O(Only structural)

There are two possibilities placing Cl in place of H.

y = 3 There are one possibilities of placing Cl, therefore z = 1

Ex.22 Find the total conjugated diene in C5H8 (Only structural)

no possibility as placing double bond the valency of C will be more than four.

This type of isomerism is found in those types of compounds which have polyvalent atoms or polyvalent functional group, e.g. ether, 2º amine, ester etc.

Compound having same molecular formula but different due to oscillation of an atom (usually H ) are known as tautomers.

as after removal of H+, the anion formed is resonance stabilised. 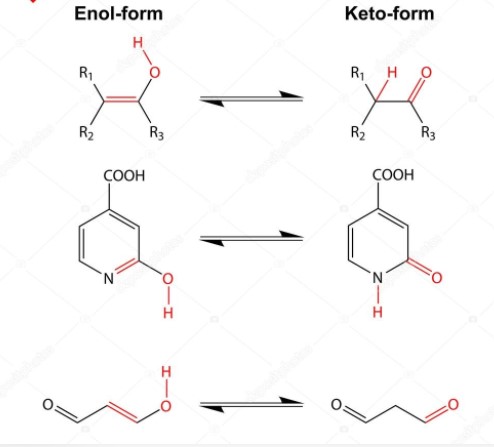 * enol is more acidic than keto.

* After removal of H+ from both form. 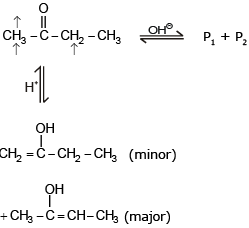 * Generally keto form is more stable than enol but in some cases the stability of enol form is greater than keto. This is due to

* Due to intramolecular H-bonding formation of 6 member ring takes place which is the cause of stability.

* This can be also summarized as:

*  (Keto < enol due to Intramolecular H-bond)

Ex.28 Find the enol form the given compound.

Sol. After removing H  (acidic-H) from the compounds

* Formation of carbanion is one of step of from keto to enol. Therefore can be calculated as enol percent a stability of carbanion.

Ex.30 Find the enol form of

due to extended conjugation in (II)

⇒ Compound will have less tendency to come into in enol form as C - D bond breaking is one of the step for conversion of keto into end.

⇒ enol percent will be less.

* To get the product directory replace all a-hydrogen w.r.t. carbonyl group by D(Deuterium): 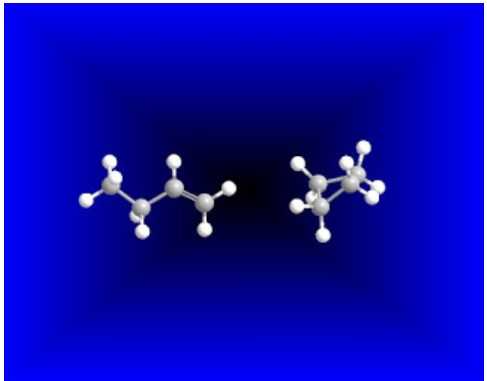 (i) Alkene and cycloalkane, (CnH2n)