The document Syllogism CLAT Notes | EduRev is a part of the CLAT Course Logical Reasoning for CLAT.
All you need of CLAT at this link: CLAT

The word syllogism is derived from the Greek word “syllogismos” which means “conclusion, inference”. Syllogisms are a logical argument of statements using deductive reasoning to arrive at a conclusion. The major contribution to the filed of syllogisms is attributed to Aristotle.

The questions of syllogisms of three main parts.

Example: All women are smart.

The minor premise is a specific example of the major premise.

Example: Amanda is a woman.

The conclusion is a specific statement which logically follows both major and minor statement.

1. Note the number of variables present in the given statements

2. Draw a Venn diagram corresponding to each variable; several Venn diagrams is equal to the number of variables.

3. Deduce the logical level by reading the statements and draw the corresponding Venn diagram

4. Check the conclusions given by comparing it with the Venn diagram obtained

Understanding Syllogism with the help of Venn Diagram: 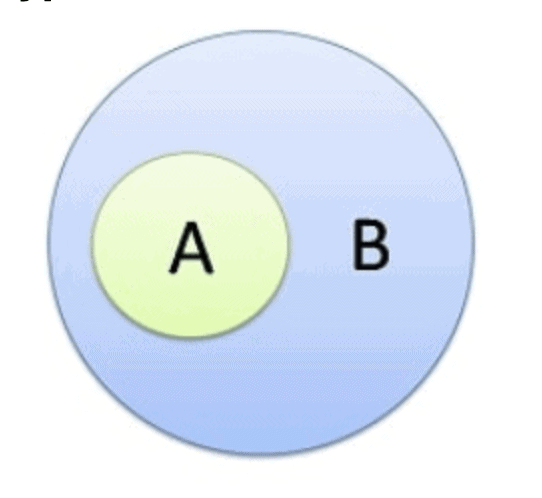 Example: All ‘A’ are ‘B’.From this statement, it can be inferred that:

Example: No ‘A’ are ‘B’.Conclusions which can be drawn from the given statement are:

Example: Some ‘A’ are 'B’From the given statement, we can conclude:

Example: Some ‘A’ are not ‘B’.It cannot be explained with a diagram. Moreover, no logical conclusion can be drawn from the given statement.  There can be more than one possibilities in which this argument can be represented.They are as under:

The shaded portion shows the A, which is not B.

Deriving Logical Conclusions When Various Types ofrguments are Given Together 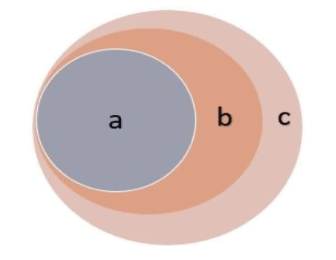 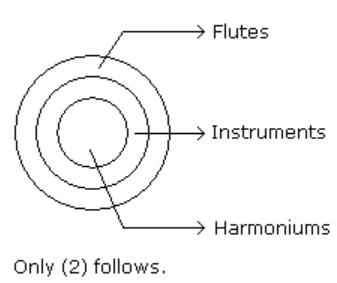 This argument can be represented by Figure 9 as well as figure 10.

Conclusions which are definitely true in both the cases:

Try yourself:Statements: Some ships are boats. All boats are submarines. Some submarines are yatches.
Conclusion:

I. Some yatches are boats.

II. Some submarines are boats.

III. Some submarines are ships.

IV. Some yatches are ships

Conclusions which are definitely true in all the possible cases:

The shaded portion shows A which are not C.

Note: Any conclusion with ‘C’ as subject and ‘A’ as predicate is not a definite conclusion.

Conclusions which are definitely true in all the cases:

The shaded portion shows C, which are not A.

Note: Any conclusion with ‘A’ as subject and ‘C’ as predicate is not a definite conclusion.

Conclusions which are definitely possible in all the cases:

Try yourself:Statements: Most CPUs are keyboards. No keyboard is a Mouse. All Mouses are CPU.
Conclusion:

I. Some keyboards are CPU

II. All CPU’s are Mouse

III. No Mouse is a keyboard

IV. Some Mouse are keyboard

Clearly from the diagram, I and III are true.

Note:  Any conclusion with ‘A’ as subject and ‘C’ as predicate is not a definite conclusion.

I. All fans are cylinders.

II. Some cylinders are basins.

I. Some basins are cylinders.