The document The Human Eye Class 10 Notes | EduRev is a part of the Class 10 Course Science Class 10.
All you need of Class 10 at this link: Class 10

THE HUMAN EYE & COLOURFUL WORLDOur eye is the most important natural optical instrument. The eye resembles a camera in many ways. It has nearly a spherical shape.

(a) Cornea: The front of the eye is covered by a transparent spherical membrane called the cornea. Light  enters the eye through cornea. The space behind the cornea is filled with a clear liquid called aqueous humor.

(b) Iris and pupil: The iris and pupil form the variable aperture system of the eye. Iris is a dark coloured muscular diaphragm which has a small circular opening in its middle. The central circular aperture of iris is called pupil.

The iris regulates the amount of light entering the eye by adjusting the size of the pupil. This is explained below:

(i) When the light is very bright (as on a sunny day), the iris makes the pupil to contract. As a result, the amount of light entering the eye decreases.

(ii) When the light is dim (as in a dark room), the iris makes the pupil to expand. As a result, more light can enter the eye.

(d) Retina: The inside surface of the rear part of the eye ball where the light entering the eye is focused is called retina. The surface of retina consist: of about 125 million light sensitive receptors. These receptors are of two types - rods and cones. When the light falls on these receptors, they send electrical signals to the brain through the optic nerve.

The space between the eye lens and retina is filled with another liquid called vitreous humor. The image formed on the retina is retained by it for about 1/ 16th of a second.

(e) Blind spot: There are no rods and cones at the point where optic nerve leaves the eye ball to go to the brain. So, if any image is formed in this part of the retina, then no signal is sent to the brain. As a result the object is not seen. This part is therefore called the blind spot of the eye.

HOW DOES THE EYE WORK?The light coming from an object enters the eye through cornea and the pupil. The eye lens converges these light rays to form a real, inverted and high diminished image on the retina. The surface of retina consists of a large number of light sensitive cells. 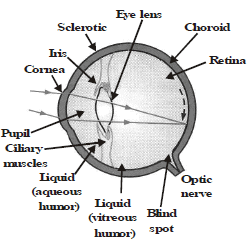 When light falls on them, they get activated and generate electrical signals. These signals are then sent to the brain by the optic nerves, and the observer sees the actual sized, erect image of the object.

Ex. Why does it take some time to see objects in a dim room when you enter the room from bright sunlight outside?Sol. In bright sunlight, iris makes the pupil to become small, so that only a small amount of light is able to enter the eye. When someone enters a dim room, very little light is available to the eye. The iris then makes the pupil to gradually expand (open up) to allow more light to enter the eye. This process takes some time.  That is why the pupil takes a little time to adjust itself to dim light.

POWER OF ACCOMMODATION OF THE EYE: The eye can focus the images of all the objects, distant or nearby, at the same place (on the retina) by changing the focal length of its lens. The eye lens can change its focal length by changing its thickness with the help of its ciliary muscles.

The property due to which eye lens is able to change its focal length is called accommodation of the eye.

When the eye is focussed on distant objects (objects at infinity), the ciliary muscle is fully relaxed. When the ciliary muscle is in the relaxed state, the thickness of the lens is minimum and the focal length maximum: equal to the distance of the retina from the eye lens. Therefore, the parallel rays coming from any distant object are focussed on the retina, and the object is seen clearly.

These adjustments in the focal length of the eye lens take place so fast that we do not realize such changes.

The phenomenon of persistence of vision is made use of in motion-picture projection (or cinematography). A sequence of still pictures are recorded on a film by a movie camera. This recorded film is projected on a screen at the speed of about 24 pictures per second. Due to the persistent of vision, the successive images on the screen merge smoothly into one another giving an impression of continuity. In this way, we are able to see the pictures in motion.

COLOUR VISION:
How do we see the colours?We see an object only when its image is formed at the retina.

Our retina has a large number of light-sensitive cells. These cells are of two shapes - rods and cones .