It consists of: President, the Vice President and the Council Of Ministers with the Prime Minister at the head to aid and advice the President. The government is in power as so long as it enjoys the majority of the members of Lok Sabha, present and voting. The government is a fusion of legislative and executive powers. The government is required to implement the laws but it also enacts the laws. Under Article 73, the executive power of the Union extends to all matters on which the Parliament may make laws. However, all powers are to be exercised in accordance with the Constitution. 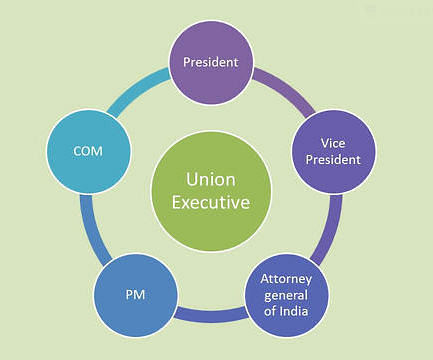 There shall be a President (Article 52) and all executive powers are vested in him and are exercised by him either directly or through officers working under him. All executive actions of the government are taken in his name.Presidential elections are governed by the provisions in Articles 54 to 58 and 62 of the Constitution.

To file a nomination for the Presidential election, a person must

2. be qualified for election as a member of the Lok Sabha

4. Not hold any office of profit under the Government of India, or of a State.

Exceptions to this condition are the offices of President and Vice-President, Governor of any State and Ministers of Union or State.

The President shall not be a member of either House of Parliament or of a State Assembly/ Council and if such a member is elected President, he shall be deemed to have vacated his seat in that House on the date on which he enters upon office as President.

There is uniformity in the representation of different states at this election as per the population and the total number of elected members of the Legislative Assembly of each state. There is no restriction on the number of times a person can be the President of India. (Unlike in the USA, where a person cannot be the President for more than two consecutive terms).

The authority to conduct elections to the President is vested in the Election Commission of India.

His term of office is five years unless he resigns earlier or is removed by impeachment. He is eligible for re-election.

The president may be impeached on a charge of violating the constitution.Procedure For Impeachment (Article 61)

If the President is to be impeached for violation of the Constitution, the charge shall be initiated by either House of Parliament. No such charge shall be preferred unless

(a) the proposal, signed by not less than one-fourth of the total members of the House, has been moved after at least fourteen days written notice has been given, of their intention to move the resolution, and

(b) such resolution has been passed by not less than two-thirds majority of the total membership of the House. If the second house also approves the resolution, the office is deemed to be vacated. Both nominated and elected members to take part in the process of impeachment.

Powers Of The President

4. Judges to the Supreme Court and the High Courts

5. Chairman and member of the Union Public Service Commission

8. Comptroller and Auditor-General of India

The President has the power to

4. Send messages to Parliament and

5. Dissolve the Lok Sabha and

6. Promulgate ordinance at any time, except when both Houses of Parliament are in session.

If the President is satisfied that the grave situation exists in India or part thereof on account of reasons mentioned in Articles 352 and 360, he may issue a proclamation of emergency.

No Money Bill or demand for grants can be introduced in Parliament unless it has been recommended by the President.

He has the power to

6. Military Powers As the Supreme Commander of the Armed Forces, he has the authority to declare war and peace.

Though the President of India does not have the power to overrule any law passed by the Parliament, the constitution does not provide any time period for the President to give his assent to the bill. This action, giving him the power to withhold assent to a bill, is known as ‘pocket veto’.

He is entitled to a salary of Rs. 5 lac a month besides an official residence, free of cost. He is also eligible for a pension after retirement.

The President or the Governor of a state is not answerable to any court for the exercise and performance of powers and duties of his office in any court during his term.

The Vice President is elected by both the houses (Electoral College) by a system of proportional representation by means of a single transferable vote. Nominated members also participate in his election. The Supreme Court has the final and the exclusive jurisdiction to resolve any disputes regarding the election of the Vice-President.

The Vice-President may be removed by a resolution of the Rajya Sabha by a majority of all its members and agreed to by the Lok Sabha. No such resolution shall be moved unless at least 14 days' notice has been given.

The real executive authority is vested with the Prime Minister. As the head of the Council of Ministers, he is the Head of the Government. He is also the leader of the party/coalition in Parliament. All ministers are appointed at his recommendation and are also removed from his advice. He also allocates work among the ministers and can change their portfolios at his will. He is the link between the council of ministers and the President. He has the duty to keep the President informed of all decisions relating to administration and legislation.

The Prime Minister is not appointed for a particular period. He is in office as long as he enjoys the support of a majority of the members of the house.

He gets the same salary as other MPs. [In addition, he gets some other allowances].He is the ex-officio Chairman of the Niti Aayog (which has replaced the erstwhile Planning Commission) and its Governing Council, National Integration Council and Inter-State Council.

Morarji Desai was the first Prime Minister to resign without completing his term while Choudhry Charan Singh resigned without facing the Parliament.

The Council Of Ministers