Example: Parallel economy, in contrast to the goals of legitimate sector, through its illegitimate activities accentuates inequalities in income and frustrates all attempts of the State to establish a socialist pattern of society. 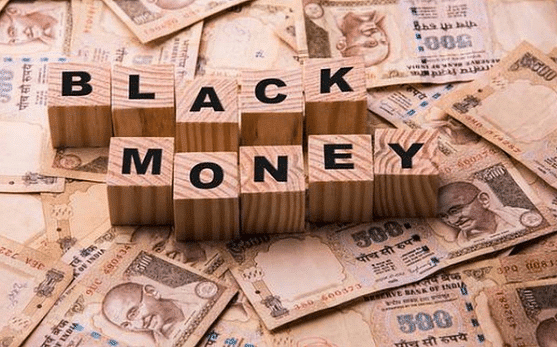 Black money is the money generated by activities that are kept secret, in the sense that these are not reported to the authorities. As such, money earned from these activities also is not accounted to the fiscal authorities. That is, taxes are not paid on this money. It is defined as the aggregates of income which are taxable but are not reported to tax authority. Black money has acquired some kind of social acceptability. It is an important source of party funds.
Black money is now held not only by businessmen but also by dishonest bureaucrats and unscrupulous politicians.There is no firm estimate of the size of black money in India. There is tentative guess that the amount of black money in the Indian economy roughly equals the white money. It is thus aptly called the Parallel Economy.
The black money is accumulated by the criminals, smugglers, hoarders, tax-evaders and other anti-social elements of the society who are not scared of punishment given by the law for such crimes. Around 22000 crores of rupees are supposed to have been accumulated by the criminals for in the Supreme Court estimate this to be even larger, at Rs. 90 lakh crores. The total amount of black money deposited in foreign banks by Indians is unknown. Some reports claim a total of US $ 100.06 trillion is held illegally in Switzerland. But according to Swiss Bankers and the Government of Switzerland the total amount held in all Swiss Bank accounts by citizens of Indian is about US $ 2 billion.

World War II was a period of crisis for all national economies. This resulted in hyper inflation, price escalation, high taxation by government to raise more revenues, and therefore the increased instances of tax evasion and consequent black marketing created a psychology of making money out of shortages and not out of productive expansion of sales.

The large number of controls and regulations inherited from the war regime were excessive and inadequately implemented.In spite of the original objective of planned use of scarce resources, the desired goods were not delivered. It bred corruption. Bribes or speed money were used to secure permits, quotas, licences, etc. from many government officers/organizations. These controls led at times to artificial shortages. This affected a large variety of goods, manufactures and raw materials, imported or domestically produced. The prices paid/received on these controlled goods were much about the official prices. These excess prices swelled the black money. The tendency of tax evasion is due to the high marginal rate of income.

According to the World Bank, the highest marginal tax rate (Individual rate percentage) in India was last measured at 30.9% in 2013. The corporate marginal tax rates in India from 2006 to 2015 ranges from 33.66% to 34.61%. The situation in the case of indirect taxes is worse, since the revenue from these taxes constitutes a big proportion of all tax revenues. Revenue from customs and central excise duties is an much as 80% of the total revenue.

According to the National Institute of Public Finance Policy, excise evasion is rampant in such sectors as cotton fabrics and plastics. It is also suggested by the institute that tax evasion through the under estimation of production and sales is most pronounced in manufacturing, trade, hotels and restaurants. The progressive reduction, over the years, in the ratio of direct tax revenue to indirect tax collection is interpreted as evidence of usually severe evasion of direct taxes in India.

The steady increase in public expenditure has been resulting in large leakage into the stream of unaccounted income. Since this course could attract more and more funds easily, the non-poor beneficiaries see to it that such schemes and the accompanying procedures of expenditure continue. This. combined with the growth of political funding, is seen as another significant factor behind the growth of black income.

Transactions in real estate swells the quantum of black money. In the case of rented buildings, the evil creeps in at the time of change in tenant. The operation of rent control has led to the phenomenon of 'pugree' as the scarcity premium, with rent remaining the same.

When real estate is bought and sold, both parties to the transaction find substantial advantage in declaring a lower price and setting the rest in cash. The seller is tempted to evade capital gains tax and wealth tax. The buyer benefits by evading wealth tax, stamp duty for registration of the property, and house property tax.

The general deterioration in moral standards of our people and weakening moral inhibitions against tax evasion are cited as other significant factors fueling the rise of tax evasion.

In practice, deterrence against tax evasion is weak though the legal provisions are adequate. The system of permanent account numbers has not been completely adopted and coordination of useful information collected from outside left much to be desired. Similarly, the potential for detecting evasion through systematic survey has not been fully exploited. Black money is a misdirection of national resources. It is normally kept in the form of unproductive assets like real estate, land, buildings or gold, diamonds etc. or squandered on ostentatious consumption of goods and services, thus contributing hardly anything to productive activities.

The most obvious consequence of substantial black economy is misinformation about the actual state of the economy which could lead to faulty diagnosis and inappropriate policy actions. Tax evasion reduces the elasticity of the tax system, undermines its equity and affects resource allocation in the economy. Black money destabilizes monetary policy.It worsens income distribution and thereby undermines the fabrics of society. The worst income class who constantly find the gap between the haves and have-notes increasing.

The unseen but real effect is on the valued system of society where dishonesty is seen as paying and trickery is seen as better than hard work, the moral fabric of society takes a hard knock.

Some of the possible remedies on black income are:

The government should start a national fund for slum clearance or similar social objectives with a seed capital of Rs 100 crores and then float debentures with maturity period of 7-10 years and an interest rate of 8%. No question should be asked on the source of funds invested in these debentures. The value of debentures and interest there on could be Liable to wealth tax, income tax, but exempt from gift tax.

Government Measures 1. The Voluntary Disclosure Schemes 1951, 1968 and 1975 : Under these schemes, those declaring their concealed income were given amnesty. The amount disclosed came to about Rs. 1,000 crores.

2. Voluntary Disclosure of Income Scheme (VDIS) 1997: The scheme was successful. The salient features of the scheme were : immunity from any further enquiry of disclosed income, amnesty covering both movable and immovable properties, no questioning about year or nature of source of funds and a concessional rate of taxation — 30 percent for individuals and 35 percent for corporate — on the disclosure.

This scheme was distinct from the previous schemes in that those getting the amnesty were taxed at 30 percent compared to existing 40 percent and was open for longer duration (from 1 July 1997 to 31 December 1997). The money disclosed was about 10,000 crores.

4. Issue of Special Bearer Bonds on a Nominal Rate of Interest: Some success was there.

5. The Non-Resident Investment Scheme: Its objective is to attract savings of Indians settled abroad by way of repatriation of their money to India. To an extent, may have attracted black balances held abroad.

Different steps has been formulated to curb the menace of black money in India. There were co-ordinated efforts from the part of government, RBI, and Supreme court. Steps taken include:

These schemes, except Voluntary Disclosure Scheme, reach only the cash component of the black money. Black money is kept more in the form of gold, jewellery, real estate, etc. than in cash, and these remain outside the scope of the schemes. Also, these special schemes discriminate in favour of tax evaders and against honest tax payers.
It is to be noted here that though we have formulated different strategies and policies to combat black money, its effect is not reflected in implementation. The need of the hour is greater political will and global coordination to counter the issue. People must honestly fulfil their duty to pay tax and thus make the government fulfil its duty of providing the masses their due.