To find the mass of the given body by sensibility method, using a beam balance.

The beam balance is a device used for the determination of the mass of a body under gravitation. 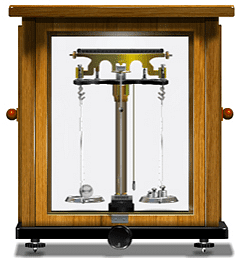 It consists of a beam supported at the centre by an agate knife edge resting on a support moving inside a vertical pillar. The beam carries a light pointer which moves over a scale. There are two stirrups at the ends of the beam which carries two scale pans of equal masses along with adjusting nuts. These can be adjusted to make the pointer  oscillate within the scale when the balance is raised. The balance is mounted on a platform provided with three leveling screws which make the pillar vertical. There is a plumb line which shows whether the pillar is vertical or not. The balance is enclosed in a glass case in order to avoid disturbances due to air.

Correct mass of the body using the beam balance,

Where,W - Mass in the panR0 - Zero resting pointR - Resting point with the body counter-poised with weight WS - Sensibility of the balance.The sensibility S, the weight required to shift the resting point by one division is calculated from the equation,

How does a beam balance work?

The leveling screws at the base are adjusted to make the pillar vertical. The beam is gently raised by turning the handle. If the pointer does not oscillate almost equally on either side of the central division of the scale, adjust the nuts suitably at the ends of the beam.

Before determining the mass of the body one needs to calibrate the beam balance.

Now let’s find out the mass of the body (M)

The balance is arrested by turning the handle. The given body is placed in the left pan and it is counter balanced by a known mass (W) in the right pan. The resting point (R) is determined. The correct mass of the body can be calculated using the relation (1) explained in the the 'Theory' tab.

Note: The pointer of the beam balance always rests near the pan having less weight.

Note: The pointer of the Beam balance always rest near the pan having lesser weight.

To find the weight of the body