The document Theory & Procedure, Saponification (The process of Making Soap) Class 10 Notes | EduRev is a part of the Class 10 Course Science Class 10.
All you need of Class 10 at this link: Class 10

Our ObjectiveTo study the saponification reaction for preparation of soap.

Soaps and detergents are essential to personal and public health. They safely remove germs, soils and other contaminants and help us to stay healthy and make our surroundings more pleasant.   Soaps are made from fats and oils or their fatty acids. 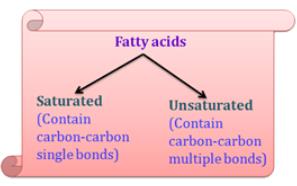 What are fatty acids?

Fatty acids are merely carboxylic acids consisting of a long hydrocarbon chain at one end and a carboxyl group (-COOH) at the other end. They are generally represented as RCOOH. They are an important component of plants, animals and other microorganisms. They are found in various parts of the body, such as cell membranes, the nervous system and as lung surfactant.There are two groups of fatty acids: saturated fatty acids and unsaturated fatty acids. 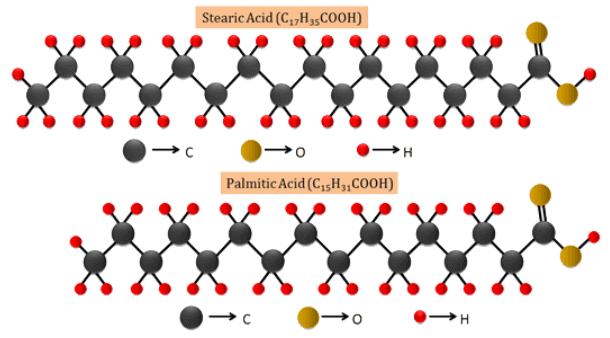 If a fatty acid has two or more carbon-carbon double bonds in the molecule, it is known as poly-unsaturated fatty acid. 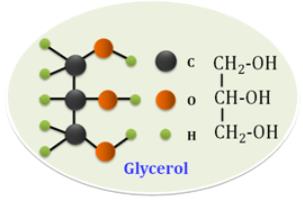 Soaps are sodium or potassium salts of long chain fatty acids. When triglycerides in fat/oil react with aqueous NaOH or KOH, they are converted into soap and glycerol. This is called alkaline hydrolysis of esters. Since this reaction leads to the formation of soap, it is called the Saponification process.

The saponification  reaction is exothermic in nature, because heat is liberated during the process. The soap formed remains in suspension form in the mixture. Soap is precipitated as a solid from the suspension by adding common salt to the suspension. This process is called Salting out of Soap.

Depending upon the nature of alkali used in the production of soap, they are classified into two types.

The sodium salt of long chain fatty acid is known as hard soap. It is difficult to dissolve in water. It is used as laundry soap.

The potassium salt of long chain fatty acid is known as soft soap, as it produces more lather. It is used as toilet soap and shaving soap.

Since soaps have free alkali ions, they are alkaline in nature. Hence, the soap solutions are slippery to the touch.