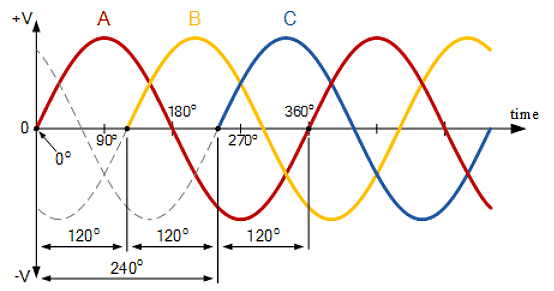 The advantage here is that a three-phase alternating current (AC) supply can be used to provide electrical power directly to balanced loads and rectifiers. Since a 3-phase supply has a fixed voltage and frequency it can be used by a rectification circuit to produce a fixed voltage DC power which can then be filtered resulting in an output DC voltage with less ripple compared to a single-phase rectifying circuit. 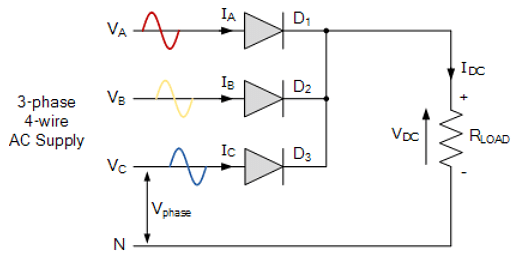 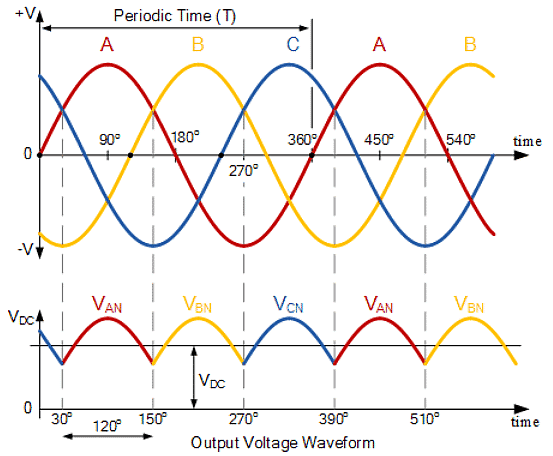 From the above waveforms for a resistive load, we can see that for a half-wave rectifier each diode passes current for one third of each cycle, with the output waveform being three times the input frequency of the AC supply. Therefore there are three voltage peaks in a given cycle, so by increasing the number of phases from a single-phase to a three-phase supply, the rectification of the supply is improved, that is the output DC voltage is smoother.

For a three-phase half-wave rectifier, the supply voltages VA VB and VC are balanced but with a phase difference of 120o giving:

Thus the average DC value of the output voltage waveform from a 3-phase half-wave rectifier is given as:

One of the disadvantages of half-wave 3-phase rectification is that it requires a 4-wire supply, that is three phases plus a neutral (N) connection. Also the average DC output voltage is low at a value represented by 0.827*VP as we have seen.

This is because the output ripple content is three times the input frequency. But we can improve on these disadvantages by adding three more diodes to the basic rectifier circuit creating a three-phase full-wave uncontrolled bridge rectifier. 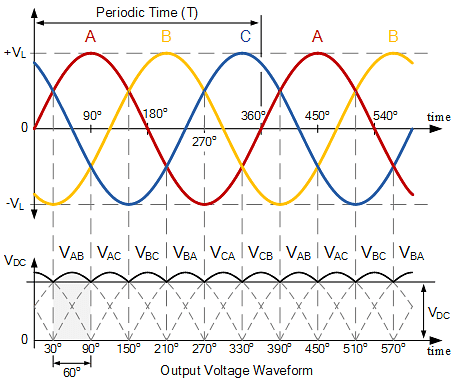 In 3-phase power rectifiers, conduction always occurs in the most positive diode and the corresponding most negative diode. Thus as the three phases rotate across the rectifier terminals, conduction is passed from diode to diode.

Then each diode conducts for 120o (one-third) in each supply cycle but as it takes two diodes to conduct in pairs, each pair of diodes will conduct for only 60o (one-sixth) of a cycle at any one time as shown above.

Therefore we can correctly say that for a 3-phase rectifier being fed by “3” transformer secondaries, each phase will be separated by 360o/3 thus requiring 2*3 diodes.

Note also that unlike the previous half-wave rectifier, there is no common connection between the rectifiers input and output terminals. Therefore it can be fed by a star connected or a delta connected transformer supply.

So the average DC value of the output voltage waveform from a 3-phase full-wave rectifier is given as:

A 3-phase full-wave bridge rectifier is required to fed a 150Ω resistive load from a 3-phase 127 volt, 60Hz delta connected supply. Ignoring the voltage drops across the diodes, calculate: 1. the DC output voltage of the rectifier and 2. the load current.

As the supply is 3-phase, the phase to neutral voltage (VP-N) of any phase will be:

Note that this is basically the same as saying:

Thus the average DC output voltage from the 3-phase full-wave rectifier is given as:

Again, we can reduce the maths a bit by correctly saying that for a given line-to-line RMS voltage value, in our example 127 volts, the average DC output voltage is:

Thyristors are three terminal semiconductor devices and when a suitable trigger pulse is applied to the the thyristors gate terminal when its Anode–to-Cathode terminal voltage is positive, the device will conduct and pass a load current.

So by delaying the timing of the trigger pulse, (firing angle) we can delay the instant in time at which the thyristor would naturally switch “ON” if it were a normal diode and the moment it starts to conduct when the trigger pulse is applied.

An example of a fully-controlled 3-phase bridge rectifier is given below: 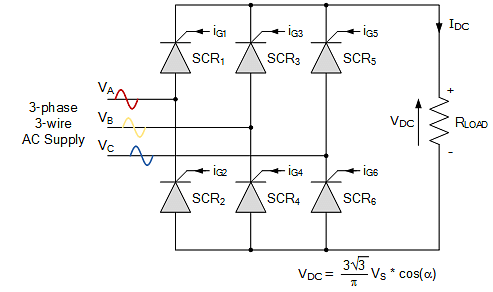