The document Type of Earthquake Waves Notes | EduRev is a part of the UPSC Course Geography for UPSC CSE.
All you need of UPSC at this link: UPSC

Seismic waves and earth’s interior: P waves, S waves, L wavesAn earthquake in simple words is shaking of the earth. It caused due to the release of energy, which generates waves that travel in all directions.

Now, first of all, You should understand Why does the earth shake?

Now you have to guess which waves are more suitable to study the interior of the earth. 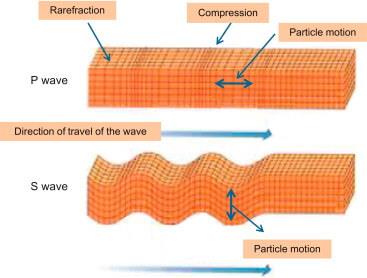 The behaviour of Earthquake Waves

The velocity and direction of the earthquake waves change when the medium through which they are travelling changes.

When an earthquake or underground nuclear test sends shock waves through the Earth, the cooler areas generally are rigid and transmit these waves at a higher velocity than the hotter regions. The emergence of Shadow Zone How can these properties of ‘P’ and ‘S’ waves help determine the earth’s interior?

The variations in the direction of waves are inferred with the help of their record on the seismograph.

By observing the changes in velocity, the density of the earth as a whole can be estimated.

By observing the changes in the direction of the waves (emergence of shadow zones), different layers can be identified.

Why can S-waves not travel through liquids?

S-waves are shear waves, which move particles perpendicularly to their direction of propagation.

They can propagate through solid rocks because these rocks have enough shear strength.

The shear strength is one of the forces that hold the rock together, and prevent it from falling into pieces.

Liquids do not have the same shear strength: that is why, if you take a glass of water and suddenly remove the glass, the water will not keep its glass shape and will flow away.

It is just a matter of rigidity: S-waves need a medium rigid enough to propagate. Hence, S-waves do not propagate through liquids.