A father returns home after a long and, possibly, hard day. He wants to savour some peace. He thinks it is his due. He is beginning to relax when his ten-year-old daughter starts pestering him. The girl wants crackers. She drones about it endlessly. Her continuous clamour gets on his nerves. He wants to vent out his discomfort but the daughter is too small. Or perhaps she would howl even louder after being thrashed. Anger pushes him to agony and he philosophises on the follies of domestic life. He wishes to be free. Then he sees his wife. That triggers his decision: in a fit of anger he decides to break free and embrace bliss. So he exercises the magically convenient chant that makes it happen:“Talaq”“Talaq”“Talaq”It was that simple. One word liberates him from his role of a responsible family-man.The next moment he makes his wife, Farha, a single mother of three children. The mother had feared this moment since the beginning of her married life. The father, though, seemingly revels in this tool of instant bond-breaking bestowed upon him by religion.Did religion really give the father this power?The All India Muslim Personal Law Board (AIMPLB) says yes. Bhartiya Muslim Mahila Andolan (BMMA) says no.

It is common knowledge that innovations are rare in Islam. But provisions to innovate do exist. ‘Biddat’ (innovation) is the word. Talaq-i-Biddat is in keeping with modern times: 30-minute pizza deliveries, two-minute pot noodles, 4-G speeds, instant divorce. The only check-box it does not tick is social progress.But there is another way; the way of the Prophet, the Sunnah. Let us see how he thought his version of divorce (Talaq-i-Sunnah) should work:Talk to her: Also called as Fa’izu Hunna. The couple must first try to resolve their differences through conversation. If that fails,Discontinue conjugal relations: Also called as Wahjuru Hunna. The couple should not sleep together till the dispute is sorted out. Wahjuru Hunna is suggested so that the physical distance may bring the couple together again. If even that does not work.Talk to her again, seriously: Also called as Wazribu Hunna. The husband should try to talk to his wife again, explain to her the seriousness of their situation and reach a truce. If there’s bad luck at even that, thenLet the family in: the husband and the wife should appoint a member from their respective families and try to heal the relationship in their presence, and if there seems to be no patch-up in sight, then:The process of divorce starts. The husband pronounces talaq for the first time. And he cannot pronounce talaq more than two times until the woman’s iddah (menses) completes. An iddah is considered to be a three month long cycle, during which the husband cannot pronounce the third talaq. This has been done to give the couple a final chance to restore their relationship. If the third talaq is pronounced, they cease to be husband and wife.Women associated with BMMA think that Talaq-i-Sunnah should be revived as women should also have reasonable time to think before taking such an important decision. AIMPLB begs to differ. Their reasons for supporting triple talaq are different (in the sense that they don’t vigorously assert that the practice has the sanction of religion), one might even say flimsy: one of its members said that it is an effective way to reduce court cases, and more dangerously, others suggest that the removal of this provision could compel Muslim men to beat and burn their wives.But their drive to oppose the proposition of BMMA actually arises from a fear: the suspicion that this issue is being deliberately raised due to the views of the incumbent Hindu nationalist party, the BJP. The Board thinks that imposing a ban on triple talaq would be the first step towards the enforcement of Uniform Civil Code: something they think will take away their religious freedom as guaranteed under article 25 (1) of the Constitution. 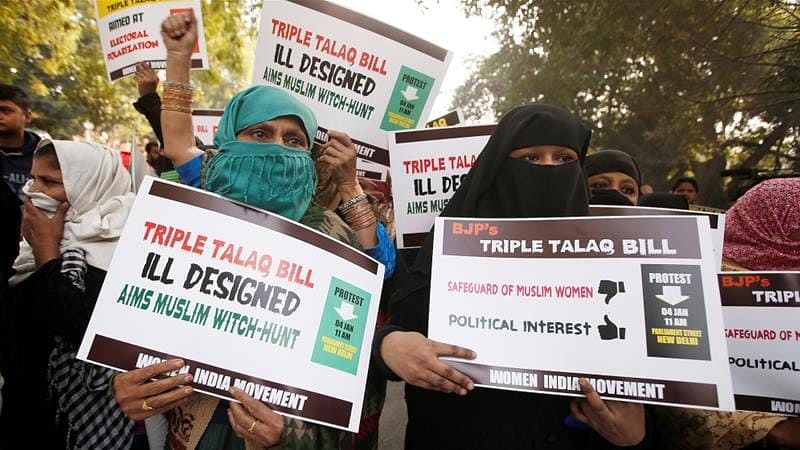 Triple Talaq Criminalisation The fear holds such a grip over the Board that it refuses to see that Muslim-majority countries like Pakistan have reformed their personal laws to ban triple talaq and have also provided for the maintenance of women—compare that to India, where Muslim clerics forced Shah Bano to disregard the Supreme Court verdict and give up on her maintenance.The general opinion seems to be in favour of banning triple talaq: BMMA claimed in a 2015 survey that 97% women were opposed to the practice, and also polygamy and nikah halala (the mandatory custom of marrying and sleeping with another man if a woman wishes to be reunited with her former husband). Another survey by AIMPLB also claims that a sizeable chunk of women want triple talaq to stay, but they have yet to reveal concrete figures.To actively condemn any development on triple talaq, the Board also had a huge rally in the form of a conference at Kolkata’s Park Circus maidan. This is as recent as November 2016. The issue has again come to the forefront with the Shayara Bano case, she was divorced using triple talaq after fifteen years of marriage.Only this month, on February 16, the Central Government has submitted four questions for the consideration of the Supreme Court which basically question whether such practices are protected by the Constitution and international treaties. The Court plans to constitute a 5-judge bench to address this issue and has asked the parties concerned to submit evidence till March 30.No decision has yet been taken by the Supreme Court; however, the Court’s previous judgments suggest that the verdict should be in favour of Shayara Bano.2016 was, and 2017 is, turning out to be a particularly nasty year for human rights and world peace. Let us hope the verdict makes us optimistic about the progress of humanity once again.