The document DC Pandey Solutions: Units, Dimensions & Vectors - 3 Notes | Study Physics Class 11 - NEET is a part of the NEET Course Physics Class 11.
All you need of NEET at this link: NEET

Ques 2: Surface tension of water in the CGS system is 72 dynes/cm . What is its value in SI units?Ans:

[θ] = [M0L0 T0]Ques 4: The relation between the energy E and the frequency v of a photon is expressed by the equation E = hv, where h is Planck’s constant. Write down the SI units of h and its dimensions.Ans:

Ques 5: Write the dimensions of a and b in the relation.

Ques 6: Check the correctness of the relation

where u is initial velocity, a is acceleration and St is the displacement of by the body in tth second.Ans:

Here t in second. Hence the given equation seems to be dimensionally incorrect. But it is correct because 1 is hidden.Ques 7: Let x and a stand for distance.

dim ensionally correct?Ans: LHS is dimensionless. While RHS has the dimensions [L-1].Ques 8: In the equation

Find the value of n.Ans: LHS is dimensionless. Hence n = 0.Ques 9: Show dimensionally that the expression,

is  dimensionally correct, where  Y is Young’s modulus of the material of wire, L is length of wire, Mg is the weight applied on the wire and l is the increase in the length of the wire.Ans: Just write the dimension of different physical quantities.Ques 10: The energy E of an oscillating body in simple harmonic motion depends on its mass m, frequency n and amplitude a. Using the method of dimensional analysis find the relation between E, m, n and a.Ans: E = kmxnyaz.

Ques 13: Find the cosine of the angle between the vectors

Ques 14: Obtain the angle between

Ques 15: Under what conditions will the vectors

be perpendicular to each other ?Ans: Their dot product should be zero.Ques 16: Deduce the condition for the vectors

Ans: Ratio of coefficients of

should be same.Ques 17: Three vectors which are coplanar with respect to a certain rectangular co-ordinate system are given by

(c) Find the angle between

Ans: No solution is required.Ques 18: Find the components of a vector

along the directions of

be respectively equal to

Find the unit vector parallel to

Ques 20: If two vectors are

By calculation, prove that

is perpendicular to both 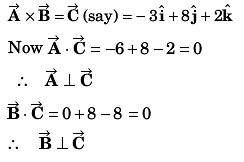 Ques 21: Find the area of the parallelogram whose sides are represented by

Ques 22: The resultant of two vectors

is at right angles to

and its magnitude is half of

Find the angle between 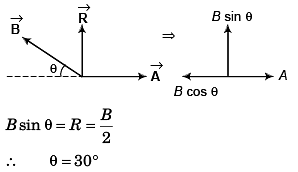 Ques 23: The x and y-components of vector

are 4 m and 6 m respectively. The x and y-components of vector

are 10 m and 9 m respectively. Calculate for the vector

the following(a) its x andy-components (b) its length (c) the angle it makes with x-axisAns:

Ques 24: Prove by the method of vectors that in a triangle

Applying sine law, we have

Ques 25: Four forces of magnitude P, 2P, 3P and AP act along the four sides of a square ABCDm cyclic order. Use the vector method to find the resultant force.Ans: 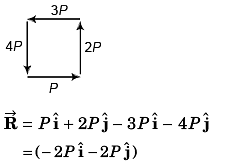 The document DC Pandey Solutions: Units, Dimensions & Vectors - 3 Notes | Study Physics Class 11 - NEET is a part of the NEET Course Physics Class 11.
All you need of NEET at this link: NEET