The document Vapour Solutions and Types of Solutions Class 12 Notes | EduRev is a part of the JEE Course Chemistry Class 12.
All you need of JEE at this link: JEE
TYPE OF SOLUTIONSSolutions can have continuously variable compositions, and they are homogeneous on a scale beyond the size of individual molecules. This definition can be used to cover a wide variety of systems, including ordinary solution such as alcohol in water or HClO4 in benzene and even solution of large proteins in aqueous salt solutions. It is also useful sometimes to consider some colloidal suspensions undergoing Brownian motion as solutions, and there are solid solutions where one solid is uniformly dissolved in another.

Most solutions can be described as having a majority called a solvent and one or more minority ingredients called solutes. The solvent is usually a liquid, whereas solutes can be solids, liquids, or gases. Solutions can be distinguished from compounds by the kind of interaction between ingredients. Compounds form as a result of interactions between relatively permanent partners, while the interactions in solutions involve continuously variable sets of solute and solvent molecules, and this interaction is widely distributed among a large and solvent molecule. Above table gives some examples of solutions and for each we want to be able to understand why the solute dissolves in the solvent.O2(g) in N2(g): This first example is; of course, of one gas dissolved in another all gases dissolve in each other in all proportions. The reason for this is that solute and solvent do not interact. This is illustrated in fig. which shows that 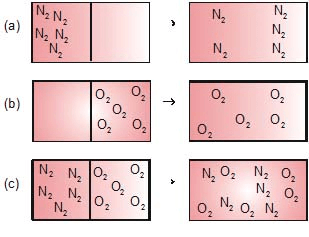 Fig: The expansion of gas as illustrated by a solution of N2 and O2 (diagrammatic). The expansions of (a) N2 and of (b) O2 are shown to be equivalent to forming (c) a solution of N2 and O2.
The process of two gases dissolving in each other is equivalent to the expansion of each gas into the larger volume without any interaction with the other. As we can see from this figure and as we also know from our daily experience, this mixing takes place spontaneously. In a gas, the high thermal energy that the molecules posses keeps them always on the move. This motion allows them to distribute themselves between the two bulbs in an arrangement with the greatest probability of occurring.That distribution results in equal O2 or N2 partial pressures in each bulb with the N2 and O2 completely mixed. It is important to note that the energy of the system has not changed, only the way in which the molecules are distributed; that is, the entropy, S of the system has changed. On the molecular level, entropy is a measure of randomness; a maximum in entropy corresponds to the most probable distribution on a statistical basis.While the mixing of ideal gases is controlled by entropy, the mixing of molecules that interact with each other can surely be controlled by energy. In the mixing process the molecular interactions can either cause the energy to increases or decrease. Chemical changes that are very exothermic show a large decrease in energy and enthalpy; as a result, they are spontaneous. However, most solutes dissolve in solvents because mixing increase the system's entropy (ΔS > 0); that it is more probable for the solutes to dissolve in the solvents then for them to remain separate as pure substances.Toluene in Benzene: 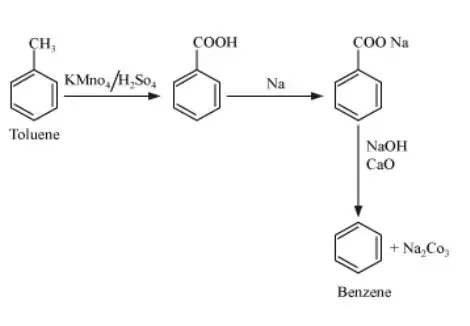 These two similar liquids readily dissolve in each other. At first glance we might think this solution shows the same pattern of mixing as do two ideal gases, but this cannot be correct since the molecules in a liquid interact with each other very strongly. The key to this solution is that the molecules of the two liquids have similar electronic structures and similar sizes. As a result, the benzene - benzene, benzene - toluene and toluene - toluene interactions are very similar. A toluene molecule, as an approximation, does not know if it is surrounded by other toluene molecule or by benzene molecules.As we might expect, there is a very negligible heat of solution. These two liquids completely dissolve one in the other and are an ideal solution. These two liquids completely dissolve one in what is called an ideal solution. The entropy gained by mixing toluene with benzene is the same as that gained by mixing two ideal gases. Solvent and solute molecules have no specific interaction with each other that do not have with molecules of their own kind. As a result the molecules distribute randomly in the solution and the change in entropy upon mixing is the same as that for two ideal gases.Acetone in Chloroform: These two liquids are not very similar; the attraction of acetone and chloroform molecules for each other is quite different from the attraction of the like molecules for each other. When acetone and chloroform are mixed heat is given off so they do not form an ideal solution.Even so, they are completely miscible. In some cases when the molecules in two liquids have quite different interactions, they may not be completely miscible. For example water and acetone are completely miscible, but water and chloroform are not. The property of liquids used to characterize solvent - solute interactions is called polarity. Polarity measures the small separation of positive and negative charges in molecules. Water is considered to be the most polar of the common solvents, as attested by the fact that it is the best solvent for ionic solutes. Acetone has an intermediate value of polarity, and chloroform is much less polar than acetone. Molecules interact very differently with molecules of widely different degrees of polarity than they do with others of their own kind. This difference in interaction leads to immiscibility.NaCl(s) in H2O(ℓ): 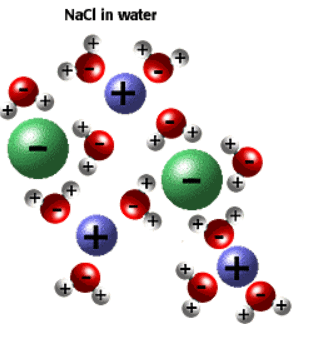 Fig: NaCl in H2O
The compound NaCl has the high melting temperature characteristic of most ionic solids. It consist of Na and Cl - ions. When NaCl dissolves in water, these ions interact with the water molecules and separate. The interaction with water is particularly large for positively charged ions, and the Na is surrounded by six closely bound water molecules, Ions surrounded by closely bound water molecules are said to be hydrated. For salts such as CaCl2 of AlCl3, the water molecules interact even more strongly with their cations and they give off heat when they dissolve.For NaCl the energy required to separate the Na and Cl - ions is nearly balanced by the energy of interaction between the water and the ions. Salts such as NaNO3 or NH4NO3 make their solutions colder when they dissolve to produce hydrated Na, NH4, and NO3- ions. The entropy of solution for an ionic solid would never be expected to be as high as its entropy of vaporization; nevertheless, salts such as NaCl and NaNO3 dissolve in water because there is a grater probability of finding them in the form of separated and hydrated ions than packed neatly in a solid. Again entropy is the controlling factor.H2SO4(ℓ) in H2O(ℓ): Almost every chemist knows that H2SO4 gives off a large amount of heat when it dissolves in water. While pure H2SO4 does not contain ions, as indicted by that fact that it is a liquid at room temperature, in dilute aqueous solutions it completely ionizes into H and SO42 -. Its high heat of solution arises largely from the heat of hydration of H. Other proton - yielding solutes like HCl(g) and HClO4(ℓ) also have large, positive heats of solution so they readily dissolve in water.LIQUID SOLUTIONConcept of Vapour Pressure: When a pure liquid is kept in closed vessel (in which no air is present) the liquid evaporates to give the vapours. After sometime a dynamic equilibrium is established between liquid and vapours. The pressure that the vapours exert at equilibrium on the walls of the container or on the surface of the liquid is called the vapour pressure of the liquid at that temperature, Figure (a).Case 1: What would happen to the vapour pressure of the liquid if we take a bigger container, Figure (b) or a wider container, Figure (c).

Key concept:When the liquid is in equilibrium with vapours, Liquid

Case 2: Take a vessel with the same liquid as in case 1 and cover it with a glass plate (of negligible weight) having a hole in it. Would the vapour pressure be the same now?