Attach
Answer to Question
B

Thanks it's very useful

B.proto historical period
B is correct
History is if two kinds pre- history which has no written evidence but only archeological findings
and proto- history that has written evidence but can't be deciphered.
thus IVC is a protohistoric civilization
The Indus Valley Civilisation (IVC) was a Bronze Age civilisation in the northwestern regions of South Asia, lasting from 3300 BCE to 1300 BCE, and in its mature form from 2600 BCE to 1900 BCE.
I hope you got your answer.
Proto historic period
Proto historical period
The Indus Valley Civilisation (IVC), or Harappan Civilisation, was a Bronze Age civilisation (3300–1300 BCE; mature period 2600–1900 BCE)[2] mainly in the northwestern regions of South Asia, extending from what today is northeast Afghanistan to Pakistan and northwest India.Along with Ancient Egypt and Mesopotamia, it was one of three early cradles of civilisations of the Old World, and of the three, the most widespread.
Aridification of this region during the 3rd millennium BCE may have been the initial spur for the urbanisation associated with the civilisation, but eventually also reduced the water supply enough to cause the civilisation's demise, and to scatter its population eastward.
Proto-history has not been defined clearly and its period has also differed from country to country. But generally it has been accepted that it is that part of history about which we have found no written record in any form. In India, we have accepted that this period of history began when the people here started producing cereals.
Remnants of a civilization have been found at different places in Baluchistan, Sindh, Punjab, Haryana, Rajasthan and nearby places which prove that prior to Harappa or Indus valley civilization, there existed a village-civilization at these places as far back as 7000 B.C. As no written evidence is available concerning this civilization, it constitutes the earliest part of proto-history of India.

When the period of proto-history ended in India?

Scholars have differed concerning it. In fact, concerning Indian history, It is find that no written historical evidences prior to 300 B.C. e.g., age of the Mauryas. Yet, as literary written evidences are being available from 600 B.C., therefore several scholars have expressed the view that the period of proto-history ended by 600 B.C. in India.

But, there are certain other scholars who have maintained that as Vedic-texts are the sources of knowing the history of the Vedic age, therefore the Vedic-age also is not a part of proto-history in India. They, therefore, have opined that the history prior to the Vedic age only should be included in the proto-history of India. This view has been accepted by the majority of scholars. Therefore, the Indus valley or the Harappa-civilization has also been accepted as a part of proto-­history. Certainly, signs of a script have been found on different seals discovered at different sites of Harappa-civilization but it has not been deciphered so far. Therefore, Harappa-civilization has been considered a part of proto-history of India
(b) Proto-- Historical Period
Prehistoric period
It belongs to proto history because proto history is between pre history and history ...pre- history includes the time period when there were no written documents and history when there was existence of written documents. therefore its in the category of proto history as it had written documents too bt not deciphered yet so therefore not in history.
Because it have own written script. but till date historian can't given it's right description, reading of that script is not possible .
Proto -Historical period 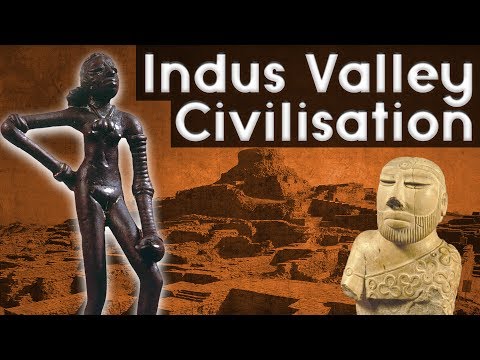 Indus Valley Civilisation UPSC Lesson | Harappa, Mohenjodaro Civilisation,
Option -B
(b) proto historical period
Proto- history means, which is evolved by excavation and not by manuscripts and historical record
It belongs to proto historic period as it has the written evidences but either are not matched with sculptures or not been able to decipher their script

Which other cultures have written evidences of Indus civilization?

By continuing, I agree that I am at least 13 years old and have read and agree to the terms of service and privacy policy.
or
Why do I need to sign in?
EduRev is a knowledge-sharing community that depends on everyone being able to pitch in when they know something.
What do I get?
125,000
Videos & Docs
500
Courses
15,000
Tests
2.5 Mn
Study Partners
I have an EduRev Account   •   Sign Up with Email
x