What are the basic differences between Roman and Iranian empires ? 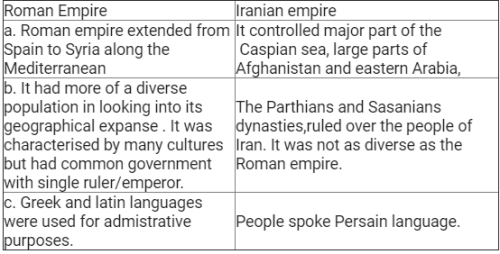 1. Extent: Stretched from Spain in Europe to Syria in the East along the Mediterranean Sea.
In the North the boundaries are marked by Rhine and Danube(rivers). In the south by Sahara desert.

2. It had a diverse population. There were many languages spoken here.

4. Upper classes of East spoke Greek and those of South spoke Latin.

2. It did not have a much diverse population.

3. There were 2 diverse dynasties that ruled over Iran, the Parthians and the Sasanians.

By continuing, I agree that I am at least 13 years old and have read and agree to the terms of service and privacy policy.
or
Why do I need to sign in?
EduRev is a knowledge-sharing community that depends on everyone being able to pitch in when they know something.
What do I get?
125,000
Videos & Docs
500
Courses
15,000
Tests
2.5 Mn
Study Partners
I have an EduRev Account   •   Sign Up with Email
x