The refraction by different layers of atmosphere is called atmospheric refraction.

(i) An object placed behind the fire or a hot surface appears to flicker when seen through the air.

(ii) Stars when seen near the horizon appear slightly higher than their actual position due to atmospheric refraction. 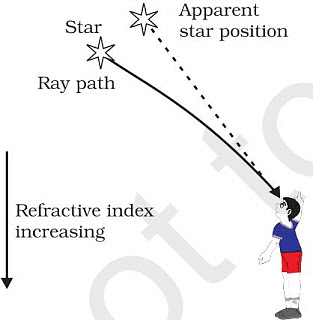 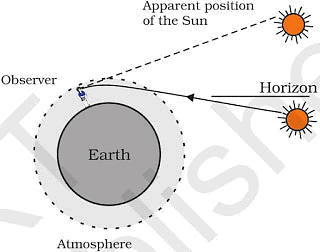 Dependence of colour of scattered light

➤ Anger signs are made in red colour

➤ Colour of sky appears blue on a clear day

➤ Appearance of sky to an astronaut in the space

➤ Colour of sun appear red during sunrise and sunset

The document Atmospheric Refraction & Scattering of Light - Notes | Study Science Class 10 - Class 10 is a part of the Class 10 Course Science Class 10.
All you need of Class 10 at this link: Class 10
Attempt Now
Join Course