The document Central Vigilance Commission UPSC Notes | EduRev is a part of the UPSC Course Indian Polity for UPSC CSE.
All you need of UPSC at this link: UPSC What is the Central Vigilance Commission (CVC)? It is an agency constituted to curb corruption in offices of the Indian government. Complaints from whistleblowers (an employee of the firm/public office informing the public about frauds/wrongdoings in the office) under ‘Whistleblower Resolution’ are received by CVC after which the commission can take actions on motivated acts.CVC is called the apex vigilance institution. It is free of control from any executive authority. Its role is to monitor all vigilance activity under the Central Government and advising various authorities in Central Government organizations in planning, executing, reviewing and reforming their vigilance work.Facts about the Central Vigilance Commission (CVC) for UPSC:

Can Central Vigilance Members be removed? Yes, the CVC members can be removed in the following circumstances:

Note: CVC members can also be removed by the President on the grounds of proved misbehaviour. However, the Supreme Court is referred by President only after which CVC member can be removed.

The Organisation of Central Vigilance Commission There are three departments under the commission, given in the table below:

What is the work of the Central Vigilance Commission (CVC)?

The following are the works of CVC members:

Jurisdiction of Central Vigilance Commission CVC can extend its jurisdiction to the following: 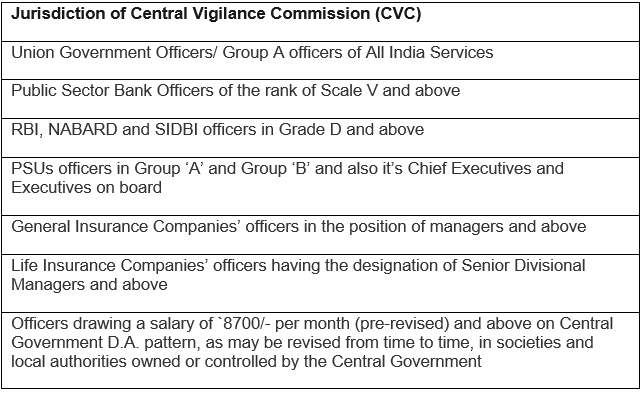 The Whistleblowers Protection Act The Act came on the heels of “The Public Interest Disclosure and Protection to Persons Making the Disclosure Bill, 2010” in the Lok Sabha on August 26, 2010. The Bill as passed by Lok Sabha and Rajya Sabha on 21st February 2014 and received the assent of the President on May 9, 2014.The act has provided mechanisms to secure the identity of public employees who expose corruption in government ministries and departments. It also aids the intention to expose corruption by public servants, including ministers.Facts related to the Whistleblowers Protection Act: