Q.1. Which of the following are not the effects of parathyroid hormone?    (2022)(A) Stimulates the process of bone resorption.(B) Decreases Ca2+ level in blood.(C) Reabsorption of Ca2+ by renal tubules.(D) Decreases the absorption of Ca2+ from digested food.(E) Increases metabolism of carbohydrates.Choose the most appropriate answer from the options given below:(a) (B), (D) and (E) only(b) (A) and (E) only(c) (B) and (C) only(d) (A) and (C) onlyAns. (a)

PTH, also known as parathormone, is made by the parathyroid glands. PTH is directly involved in the functioning of bones, kidneys, and the small intestine.

The antidiuretic hormone released by the pituitary gland stimulates reabsorption of water by the kidneys. The deficiency of this hormone causes increased urine production, a condition called diabetes insipidus. Graves disease is an immune system disorder that results in the overproduction of thyroid hormones. Addison's disease is caused by a deficiency of the hormones secreted by the adrenal cortex. Pancreas is a composite gland which acts as both exocrine and endocrine gland. The deficiency of insulin, a hormone secreted by the pancreas, causes a complex disorder called diabetes mellitus which is associated with loss of glucose through urine and formation of harmful compounds known as ketone bodies.

Q.6. How does steroid hormone influence the cellular activities?    (2019)(a) Using aquaporin channels ‘as second messenger'(b) Changing the permeability of the cell membrane(c) Binding to DNA and forming a gene- hormone complex(d) Activating cyclic AMP located on the cell membraneAns. (c)

Steroid hormones are lipid-soluble and easily pass through the cell membrane of a target cell into the cytoplasm where they bind to specific intracellular receptors (proteins) to form a hormone receptor complex that enters the nucleus. In the nucleus, hormone which interact with intracellular receptors mostly regulate gene expression or chromosome function by the interaction of hormone-receptor complex with the genome. Biochemical actions result in physiological and developmental effects.

Q.7. Match the following hormones with their respective disease:

Ans. (d)Q.8. Identify A, B and C in the diagramatic representation of the mechanism of hormone action.

Epinephrine which triggers the flight or fight response is derived from amino acid tyrosine, h is synthesised in the medulla of the adrenal glands.

Estrogen plays a central role in control of bone strength. In a healthy individual, bone mass is maintained by balanced activity of bone forming osteoblasts and bone resorbing osteoclasts. Both these cell types are reported to respond to estrogen. Estrogen promotes the activity of osteoblast and induces osteoclast apoptosis. After menopause the level of this hormone declines. Hence, in an ageing female osteoporosis occurs. Parathormone promotes mobilisation of calcium from bone into blood. Excessive activity of parathormone causes demineralisation of bone leading to osteoporosis.

Epiphyseal plate is a hyaline cartilage plate in the metaphysis at each end of long bone. It is part of long bone where new bone growth lakes place. In adults, elevated levels of GH results in acromegaly where no increase in height occurs because of ossified epiphyseal plate.

Corpus lutcum is a temporary endocrine gland in human females. 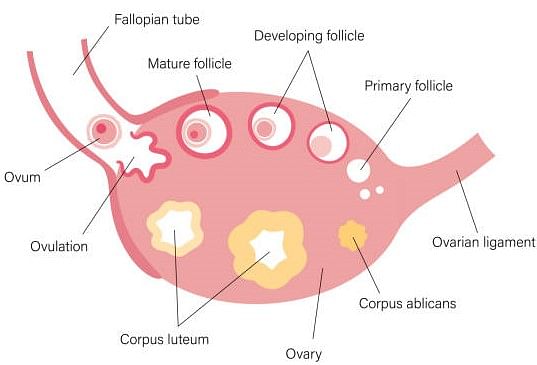 It secretes progesterone which stimulates the uterine glands to produce increased amount of watery mucus and is also essential for maintenance of endothelium. In absence of fertilisation, corpus lutcum disintegrate leading to menstruation.

Exophthalmic goitre or Graves’ disease is a thyroid enlargement (goitre) in which the thyroid secretes excessive amount of thyroid hormone. It is characterised by exophthalmia (protrusion of eye balls because of fluid accumulation behind them), loss of weight, slightly rise in the body temperature, excitability, rapid heart beat, nervousness and restlessness. 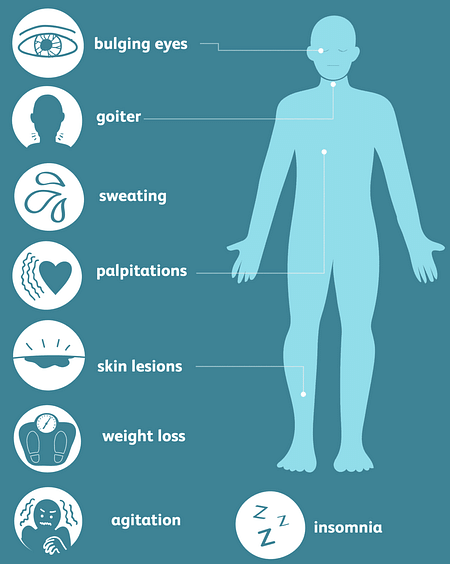 Insulin is a peptide hormone, secreted by the β cells of the islets of Langerhans in the pancreas, that promotes the uptake of glucose by body cells, particularly in the liver (hepatocytes) and muscles (adipocytes) and thereby controls its concentration in the blood.

Q.16. The posterior pituitary gland is not a true endocrine gland because    (2016)(a) It is provided with a duct(b) It only stores and releases hormones(c) It is under the regulation of hypothalamus(d) It secretes enzymes.Ans. (b)

Posterior lobe of pituitary gland does not secrete any hormone. Its hormones are synthesised by the hypothalamus. It only stores and releases these hormones. Hence, it cannot be considered as true gland.

Q.17. Which of the following pairs of hormones are not antagonistic (having opposite effects) to each other?    (2016)(a) Parathormone – Calcitonin(b) Insulin – Glucagon(c) Aldosterone – Atrial Natriuretic Factor(d) Relaxin – InhibinAns. (d)

Calcitonin exerts its effects by interacting with target cells, primarily in bone and kidney. The actions of PTH and calcitonin are antagonistic on bone resorption but synergistic on decreasing the renal tubular reabsorption of phosphorus. Insulin and glucagon work synergistically to keep blood glucose concentrations normal. An elevated blood glucose concentration results in the secretion of insulin and glucose is transported into body cells. Aldosterone secretion may be inhibited by potassium depletion, inhibitors of the reninangiotensin system, dopamine and atrial natriuretic factor.The latter appears to be an important physiological regulator of aldosterone secretion. ANF inhibits basal, ACTH, Angiotensin II and potassiumstimulated aldosterone production in vitro by a direct action on the adrenal gland. Inhibin is a hormone secreted by granulosa cells of the ovary which inhibit the secretion of FSH (Follicle Stimulating Hormone) whereas relaxin produced by ovary and placenta at the time of childbirth to softens the ligament in the pelvis and widens the cervix.

At the pituitary, GnRH stimulates the synthesis and secretion of the gonadotropins, follicle-stimulating hormone (FSH), and luteinizing hormone (LH). These processes are controlled by the size and frequency of GnRH pulses, as well as by feedback from progesterone and estrogens. Low-frequency GnRH pulses are required for FSH release, whereas highfrequency GnRH pulses stimulate LH pulses in a one to one manner.

In both females and males, inhibin inhibits FSH production. In females, FSH stimulates the secretion of inhibin from the granulosa cells of the ovarian follicles in the ovaries. In turn, inhibin suppresses FSH. In males, androgens stimulate inhibin production. It is secreted from the Sertoli cells, located in the seminiferous tubules inside the testes.

Epinephrine has two role as a hormone and as a neurotransmitter.

Aldosterone is produced by adrenal cortex and plays an important role in the regulation of Na+ and K+ levels in body.

Q.22. Which one of the following hormones though synthesised elsewhere is stored and released by the master gland?    (2015) (a) Luteinizing hormone(b) Prolactin(c) Melanocyte stimulating hormone(d) Antidiuretic hormoneAns. (d)

ADH (Antidiuretic hormone) and oxytocin are  produced by hypothalamus and stored in posterior pituitary.

Oxytocin, a neurohypophysial hormone, is produced by the hypothalamus and stored and secreted by the posterior pituitary gland. It stimulates contractions of the smooth muscle tissue in the wall of the uterus during childbirth. Progesterone is a female hormone produced by the ovaries during release of a mature egg from an ovary (ovulation). Progesterone helps prepare the lining of the uterus (endometrium) to receive the egg if it becomes fertilized by a sperm. If the egg is not fertilized, progesterone levels drop and menstrual bleeding begins. Atrial natriuretic factor is a hormonal substance produced by the right atrium of the heart that stimulates the excretion of sodium and water by the kidneys and helps regulate blood pressure.

Q.24. Fight-or-flight reactions cause activation of:    (2014)(a) The parathyroid glands, leading to increased metabolic rate.(b) The kidney, leading to suppression of reninangiotensin-aldosterone pathway.(c) The adrenal medulla, leading to increased secretion of epinephrine and norepinephrene.(d) The pancreas leading to a reduction in the blood sugar levels.Ans. (c)