Q.1. Carbon has the unique property to form bonds with other atoms of carbon.

(a) Why does carbon exhibits the property of catenation to maximum extent ?(b) With a valency of 4, how is carbon able to attain noble gas configuration in its compounds.

(a) Due to strong C—C bond or covalent nature of bond.

(b) By sharing its four valence electrons with other elements, carbon attains stable noble gas configuration.

(a) To which group and period of the periodic table does element ‘E’ belongs?(b) State the number of valence electrons and valency present in element ‘E’.

Q.3. Fertilization can be defined as the fusion of the male gametes (pollen) with the female gametes (ovum) to form a diploid zygote. It is a physicochemical process which occurs after the pollination. The complete series of this process takes place in the zygote to develop into a seed.(a) What is the fate of the ovules and the ovary in a flower after fertilization? (b) How is the process of pollination different from fertilization?

(a) After fertilization, ovules become seeds and ovaries form the fruit.(b) Pollination is the transfer of pollen grains from anther to the stigma of a flower. ½ Fertilization is the fusion of male and female gametes.

Q.4. In an experiment, Aashi took a small piece of root tissue from the rose plant and placed it in a nutrient medium. She found that each root tissue produced a new rose plant.(a) Name the reproductive process involved in the process. (b) Is the gene possessed by the new rose plant identical or different from the parent plant?

(a) The reproductive process involved is called as Tissue culture.

(b) The new rose plant has the genes which are identical to the parent plant.

Q.5. In an experiment by Mendel on a pea plant, the trait of flowers bearing purple colour (PP) is dominant over white colour (pp).(a) Explain the inheritance pattern of F1 and F2 with the help of a cross following the rules of inheritance of traits. (b) State the visible characters of F1 and F2 progenies.ORWhile performing an experiment on pea plants, Mendel crossed tall pea plants and short pea plants and produced F1 progeny through cross fertilisation. (a) What type of progeny was obtained by Mendel in F1 and F2 generations when he crossed the tall and short plants? (b) Write the ratio he obtained in F2 generation plants.

(a) Let purple trait be represented by: PP and White trait be: pp 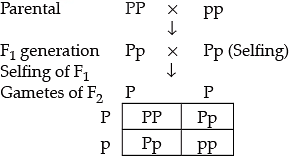 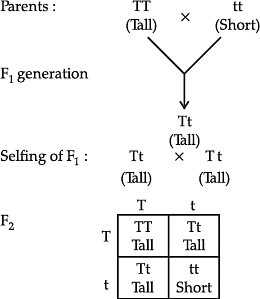 Q.6. Charged particle enters at right angle into a uniform magnetic field as shown. What should be the nature of charge on the particle if it begins to move in a direction pointing vertically out of the page due to its interaction with the magnetic field? State the rule used to find it. 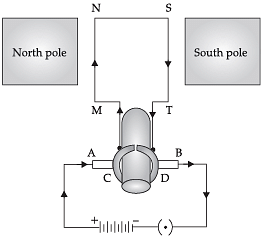 (a) Identify the diagram and write the principle involved in its working. (b) What is the function of brushes and split rings in it?

Using Fleming’s left hand rule, the nature of charged particle is positive.Fleming’s left hand rule: Fleming's left hand rule states that if we stretch the thumb, middle finger and the index finger of the left hand is such a way that, they make an angle of 90° to each other then the middle finger represents the direction of current, index finger represents the direction of magnetic field, the direction of motion of the conductor is represented by the thumb.OR(a) The given picture is of a simple electric motor.Principle of working of electric motor: A coil carrying electric current placed in an external magnetic field experiences a force.(b) Function of brushes: It helps in easy transfer of charge between the coil and the external circuit.Function of split rings: It reverses the direction of current after each half rotation of the coil so that the coil can keep rotating continuously.

Researchers conducted a study on the occurrence of DDT along food chains in an ecosystem. The concentration of DDT in various trophic level was found to be as shown in the figure. Explain how the biomagnification of DDT has affected the bird population?ORIn the morning news, Rohit, a student of Class 10 heard that the mountain of garbage in Delhi, suddenly exploded and various vehicles got buried under it. Several people were also injured and there was traffic jam all around.

Next day, the teacher also discussed this issue and asked the students to find out a solution to the problem of garbage.(a) Suggest any one measure to manage the garbage we produce.(b) As an individual, what can we do to generate the least garbage? Explain with at least one point.

Bio-magnification of DDT leads to an increase in its concentration at the higher trophic level and its higher concentration in birds leads to the disturbance in their calcium metabolism. This causes the premature breaking of eggs in birds due to thinning of eggshell. Thus, the bio-magnification of DDT leads to a decrease in bird population.OR(a) Incineration/Waste compaction/Biogas generation/Composting/Segregation and safe disposal/ Vermicomposting.(b) (i) Reuse of empty bottles, books, etc.(ii) Reduce the use of non-biodegradable substances like polythene, thermocol, etc.

Q.8. The position of three elements A, B and C in the Periodic Table is shown below:

Giving reasons, explain the following:(a) Element A is non-metal.(b) Atom of element B has a larger size than atom of element C.(c) Element C has a valency of 1.

Q.10. In humans, there is a 50% probability of the birth of a boy and 50% probability that a girt will be born. Justify the statement on the basis of the mechanism of sex-determinants in human beings.

Q.12. An electric lamp whose resistance is 20 Ω and a conductor of 4 Ω resistances are connected to a 6 V battery as shown in the diagram below. Calculate the total resistance of the circuit, the current through the circuit and the potential difference across the electric lamp and the conductor. 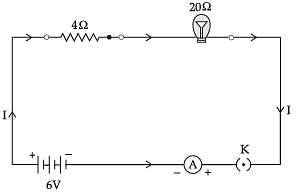 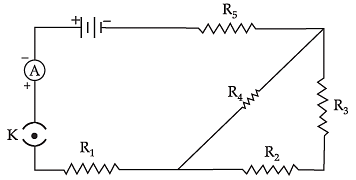 and R4 are in parallel connection

Q.13. You have been selected to talk on 'ozone layer and its protection' in the school assembly on ‘Environment Day‘.(a) Why should ozone layer be protected to save the environment?(b) List any two ways that you would focus upon in your talk to bring awareness amongst your fellow friends that would also help in protection of ozone layer as well as the environment.

(a) Because Ozone layer protects/shields the earth from harmful UV radiations of the sun.(b) (i) Conducting poster making competition highlighting effects of ozone layer depletion.(ii) Conducting street plays highlighting the ways of environment protection.Detailed Answer:(a) Ozone layer helps in shielding the Earth from the harmful UV radiations coming from sun. If ozone layer gets depleted, UV radiations can directly reach the earth's surface and drastically affect the life on earth.(b) Ozone layer can be protected by:(i) Stopping the release of chlorofluorocarbon.(ii) Removing the pollutant nitrogen monoxide.(iii) Reduce the usage of air conditioners.

This section has 02 case-based questions (14 and 15). Each case is followed by 03 sub-questions (a), (b) and (c). Parts (a) and (b) are compulsory. However, an internal choice has been provided in part (c).Q.14. A blue colour flower plant denoted by BB is cross bred with that of white colour flower plant denoted by bb.(a) State the colour of flower you would expect in their F1 generation plants.(b) What must be the percentage of white flower plants in F2 generation if flowers of F1 plants are self-pollinated? State the expected ratio of the genotypes BB and Bb in the F2 progeny.(c) State the type of plants which are not found in F1 generation but reappeared in F2 generation. Write the reason for the same.ORHow dominant and recessive traits are different from each other? 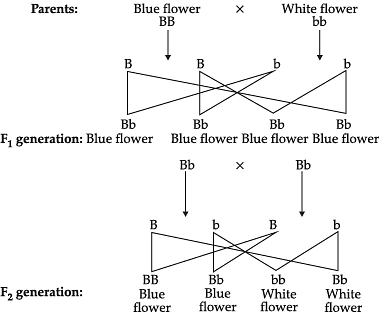 Q.15. Sanjana placed a current carrying long straight conductor PQ perpendicular to the plane of the paper as shown in the figure below. R and S are the two points at distance r1 and r2 from it. Based on the given diagram, answer the questions given below: