WEATHER MECHANISMSThe variations in local climates of India arise due to a number of factors including :(i) Surface distribution of pressure and winds,(ii) Upper air circulation caused by factors controlling global weather and the inflow of different air masses and jet streams and(iii) Inflow of western disturbances during the winter months and the tropical depressions during the South-West monsoon period into India creating weather phenomena conditions for rainfall. 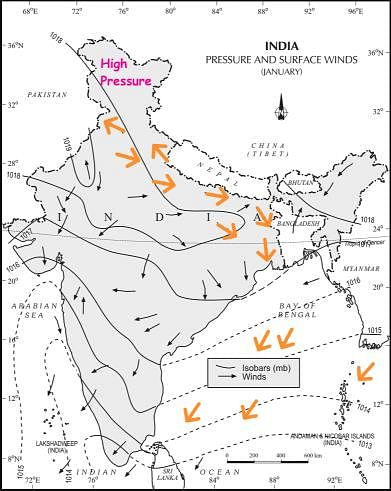 Pressure and surface windsThese mechanisms can be described with reference to the two main seasons of the year i.e, winter and summer when striking changes in weather occur. 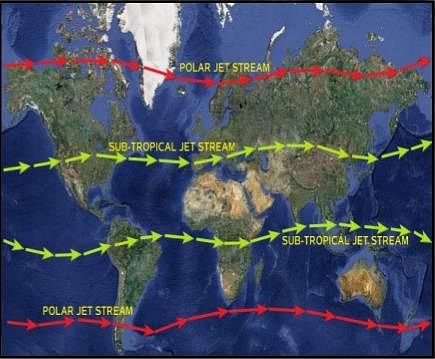 The above pattern of the pressure and winds is found only at the lower level. The circulation pattern at the level of the troposphere is altogether different from this. An easterly jet stream, which prevails over the North Indian Plain during the winter months, the easterly jet stream steers the tropical depression over India. These depressions play a very significant role in the distribution pattern of the monsoon rainfall in the sub-continent. The highest rainfall occurs along the track of these depressions. The frequency at which these depressions visit India, their direction and intensity, all go a long way in determining the rainfall patterns during the south-west monsoon period.Onset of MonsoonsThe onset of south-west monsoon is a highly complex phenomenon and there is no single theory which can explain it fully. It is still believed that the differential heating and cooling of land and sea during the summer months causes the drift of monsoon winds towards the subcontinent. Since the pressure in the ocean to the south of the landmass is high due to lower temperature, the low pressure area attracts the south-east trades across the Equator. These conditions are favourable for a northward shift in the position of the ITCZ (Inter-Tropical Convergence Zone). The south-west monsoon, which reach the west coast of the south-east trades deflected towards the Indian sub-continent after crossing the Equator. 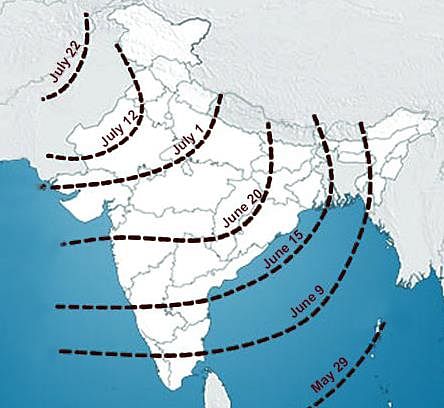 As per Indian Meteorological Department, Throughout most of the country, the year can be divided into four distinct seasons :(i) hot-dry season (mid-March to May end)(ii) hot-wet or south-west monsoon season (June to September)(iii) retreating southwest monsoon season (October to November), and (iv) cold dry season (December to February)(i) Hot-Dry SeasonThere is a progressive rise in temperature from 260C in mid-March to as high as 450C in mid-May, particularly in the Northern Plains whereas in the peninsular region there is a continuous decrease in temperature. The hot air over the Northern Plains, particularly over the north-western part, forms a low pressure centre. 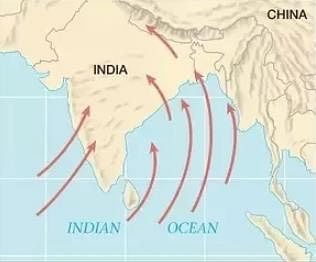 Wind direction in the summer season

The hot-dry season is characterised by weak wind and dryness over most of the country with some exceptions, such as tornado like dust storms of Punjab and Haryana, the andhis of Uttar Pradesh and the kalbaisakhis (Norwesters) of West Bengal cause some precipitation. Hot dry westerly winds called loos, blowing more frequently during May and June in the afternoons in the north-western parts of the country, desiccate plants and dry up surface moisture. They also render outdoor life difficult often resulting into several casualties. Low rain fall during the proceeding monsoons make the drought situation severe during the succeeding season as acute scarcity of water, food and fodder renders life miserable.(ii) Hot-Wet Season 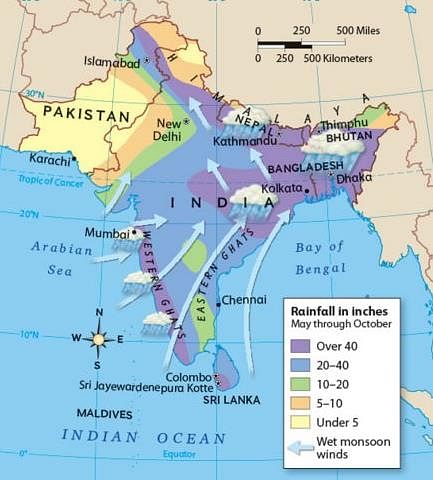 Wind direction in the rainy season

The fine weather conditions, however, at intervals get disturbed by shallow cyclonic depressions, also known as western disturbances, which originate over the east Mediterranean and Pakistan before bringing light rainfall in the plains and snowfall on the mountains.The only part of India benefiting from the north-east trade winds is the coast of Tamilnadu which gets most of its rainfall from these winds that absorb moisture content while blowing over the Bay of Bengal. It is in this context these winds are popularly called as north-east monsoons.