The document Doc: Crystal Lattice and Unit cells Class 12 Notes | EduRev is a part of the Class 12 Course Chemistry for JEE.
All you need of Class 12 at this link: Class 12

What is a Crystal?

Crystalline solid consists of a large number of small units, called crystals, each of which possesses a definite geometric shape bounded by plane faces. The crystals of a given substance produced under a definite set of conditions are always of the same shape.

What is a Unit Cell?

This smallest amount of the solid whose properties resemble the properties of the entire solid irrespective of the amount taken is called a unit cell.

When the constituent particles occupy only the corner positions, it is known as Primitive Unit Cells.

When the constituent particles occupy other positions in addition to those at corners, it is known as Centred Unit Cell.

There are 3 types of Centred Unit Cells:

(i) Body Centred: When the constituent particle at the centre of the body, it is known as Body Centred Unit cell.

(ii) Face Centred: When the constituent particle present at the centre of each face, it is known as the Face Centred Unit cell.

(iii) End Centred: When the constituent particle present at the centre of two opposite faces, it is known as an End Centred Unit cell. 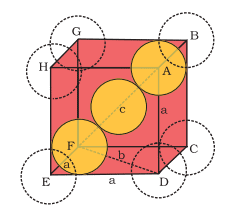 Try yourself:In a body centered cubic cell, an atom at the body center is shared by:
Explanation

In body centred cubic cell, an atom at the body-centre is shared by 1 unit cell.
Thus, this atom contributes one atom to the unit cell. 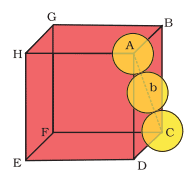 Try yourself:The coordination number of an atom in a fcc lattice is _________.
Explanation

A unit cell with a single constituent particle of atom, molecules, or ions located in the centre of the opposite faces, apart from that present in the corners. Two atoms are present in end centred cubic unit cell. Each corner atom would be common to 6 other unit cells, therefore their contribution to one unit cell would be 1/6. Therefore, the total number of atoms present per unit cell effectively is 6.

In the figure, ABCD is the base of the hexagonal unit cell AD=AB=a. The sphere in the next layer has its centre F vertically above E and it touches the three spheres whose centres are A, B, and D. The height of the unit cell (h) = The area of the base is equal to the area of six equilateral triangles, =

.The volume of the unit cell = .Therefore,

The Density of Crystal Lattice

Bravais (1848) showed from geometrical considerations that there are only seven shapes in which unit cells can exist.

Moreover, he also showed that there are basically four types of unit cells depending on the manner in which they are arranged in a given shape. These are:

He also went on to postulate that out of the possible twenty-eight unit cells (i.e. seven shapes, four types in each shape = 28 possible unit cells), only fourteen actually would exist. These he postulated based only on symmetry considerations. These fourteen unit cells that actually exist are called Bravais Lattices.

The seven crystal systems are given below: 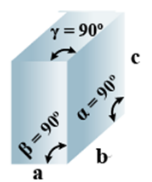 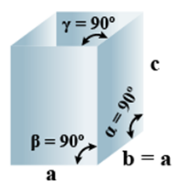 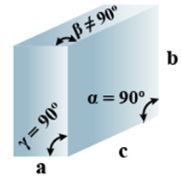 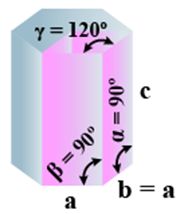 The table given below can be used to summarize types of lattice formation.