Ques 1: A particle is projected along an inclined plane as shown in figure. What is the speed of the particle when it collides at point A? (g = 10 m/s2) 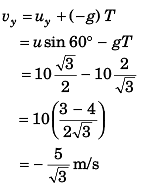 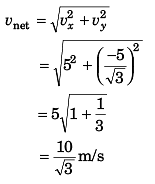 Ques 3: Two particles A and B are projected simultaneously from the two towers of height 10 m and 20 m respectively. Particle A is projected with an initial speed of 10√2 m/s at an angle of 45° with horizontal, while particle B is projected horizontally with speed 10 m/s. If they collide in air, what is the distance d between the towers? 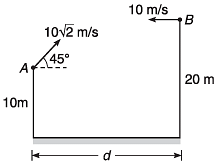 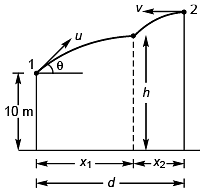 For vertical motion of particle 1:

For the vertical motion of particle 2:

= 1 sAs TA < t, particle A will touch ground before the expected time t of collision.∴ Ans: NO.Ques 5: A particle is projected from the bottom of an inclined plane of inclination 30°. At what angle α (from the horizontal) should the particle be projected to get the maximum range on the inclined plane.Ans: 60°Sol: For range to be maximum

Ques 6: A particle is projected from the bottom of an inclined plane of inclination 30° with velocity of 40 m/s at an angle of 60° with horizontal. Find the speed of the particle when its velocity vector is parallel to the plane. Take g = 10 m/s2.Ans:

Sol: At point A velocity

of the particle will be parallel to the inclined plane.

Ques 7: Two particles A and B are projected simultaneously in the directions shown in figure with velocities vA = 20 m/s and vB = 10 m/s respectively. They collide in air after 1/2 s. Find:(a) the angle θ (b) the distance x. 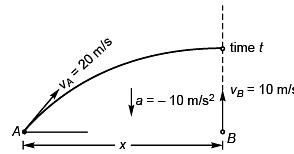