The document Daniel Cell Or Galvanic Cell Class 12 Notes | EduRev is a part of the Class 12 Course Chemistry Class 12.
All you need of Class 12 at this link: Class 12

It is designed to make use of the spontaneous redox reaction between zinc and cupric ions to produce an electric current. It consists of two half-cells. The half-cells on the left contain a zinc metal electrode dipped in ZnSO4 solution. During the passage, if the electric current through the external circuit, electrons flow from the zinc electrode to the copper electrode. At the zinc electrode, the zinc metal is oxidized to zinc ions which go into the solution.The electrons released at the electrode travel through the external circuit to the copper electrode where they are used in the reduction of Cu2+ ions to metallic copper which is deposited on the electrode. Thus, the overall redox reaction is:Zn(s) + Cu2+  →   Cu(s) + Zn2++(aq)Thus, indirect redox reaction leads to the production of electrical energy. At the zinc rod, oxidation occurs. It is the anode of the cell and is negatively charged while at the copper electrode, reduction takes place; it is the cathode of the cell and is positively charged.Thus, the above points can be summed up as:

The signs of the anode and cathode in the voltaic or galvanic cells are opposite to those in the electrolytic cells.

Daniell cell has the emf value 1.09 volt. If an opposing emf exactly equal to 1.09 volt is applied to the cell, the cell reaction,Zn + Cu2+→  Cu + Zn2+stops but if it is increased infinitesimally beyond 1.09 volt, the cell reaction is reversed.Cu + Zn2+→  Zn + Cu2+Such a cell is termed a reversible cell. Thus, the following are the two main conditions of reversibility:

Among other cells, a galvanic cell is a type of electrochemical cell. It is used to supply electric current by making the transfer of electrons through a redox reaction. A galvanic cell is an exemplary idea of how energy can be harnessed using simple reactions between a few given elements. It is amazing to study how a galvanic cell can be set up and utilized to obtain energy.Explaining in the most simple terms, a galvanic cell acts as a device in which simultaneous oxidation and reduction reactions take place. These reactions are used to convert chemical energy into electrical energy, which can be utilized for any commercial purpose. Working of Galvanic Cells
The working of a galvanic cell is quite simple. It involves a chemical reaction that makes the electric energy available as the end result. During a redox reaction, a galvanic cell utilizes the energy transfer between electrons to convert chemical energy into electric energy.The galvanic cell utilizes the ability to separate the flow of electrons in the process of oxidization and reduction, causing a half-reaction and connecting each with a wire so that a path can be formed for the flow of electrons through such wire.This flow of electrons is essentially called a current. Such current can be made to flow through a wire to complete a circuit and obtain its output in any device such as a television or a watch.A galvanic cell can be made out of any two metals. These two metals can form the anode and the cathode if left in contact with each other. This combination allows the galvanic corrosion of that metal which is more anodic. A connecting circuit shall be required to allow this corrosion to take place.Setup of a Galvanic Cell

These two electrodes shall form the two essential components of the galvanic cell. The chemical reaction related to reduction shall take place at the cathode while the oxidation half-reaction shall take place at the anode. As has already been said, any two metals can be used to create a chemical reaction.Understanding the Galvanic Cell with an Example

Since these two metals will be placed in two separate containers and would be connected by a conducting wire, an electric current would be formed, which would transfer all electrons from one metal to another.At the same time, the two metals shall be immersed in a salt solution, say, Zinc sulphate and Copper sulphate in this case. In this case, the two solutions are not mixed together directly but can be joined using a bridge or a medium.This medium shall be responsible for the transfer of ions but also make sure that the two solutions do not come to mix with each other. 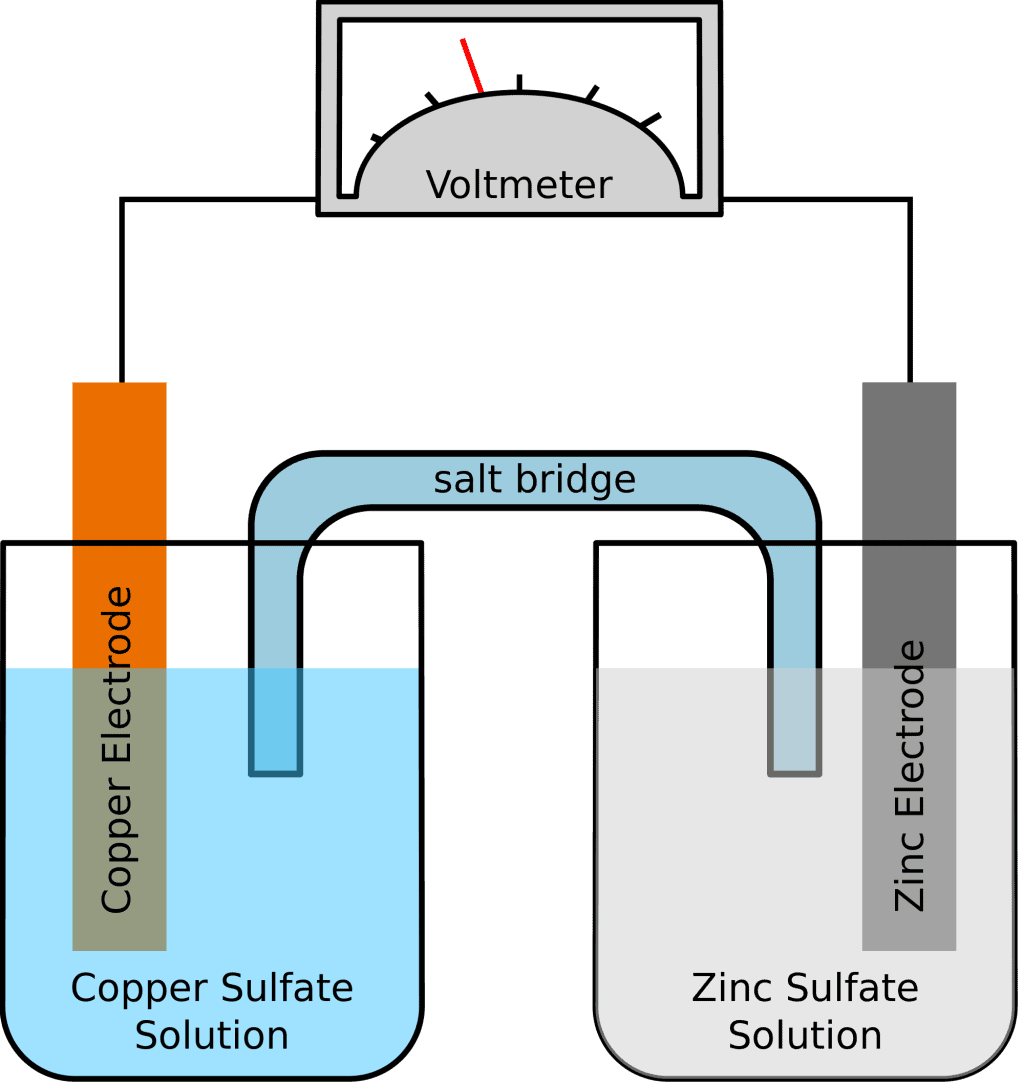 Galvanic cell
Such a bridge helps in completing the circuit for carrying the electric charge and also makes sure that the solutions in the containers with the metals remain neutral and do not mix with each other.As long as the salt bridge does not interfere with the redox reaction, under which oxidization and reduction are taking place, it does not matter which salt bridge is being used in the chemical reaction.Some Important Terms​

Some of the important terms brought into use in galvanic cells are listed below:

Phase boundaries: It refers to the two metals which act as cathode and anode.

Salt bridge: The connecting bridge or medium that allows a redox reaction to take place.

Oxidation and reduction: The chemical processes that allow the electric current to form and flow through a galvanic cell.